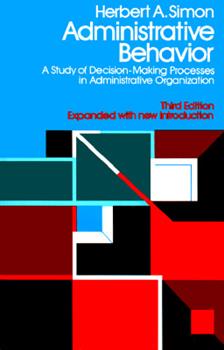 by Herbert A. Simon

Published by Thriftbooks.com User , 14 years ago
Quick: Choose the two most influential people in business and industry in the latter half of the 20th century. If you chose people in the news, like Bill Gates or Tim Berners-Lee, you'd be wrong. People who make news are the exceptions, the high fliers, the men who bite dogs. The real movers fly under the radar, because they don't bother with exceptions: they define the rules. So it was with Claude Shannon, who defined the rules of information theory: signal/noise ratios, feedback, errors--the foundation stones for telecommunications and so much more. For the best overview of Shannon's contribution to understanding that "so much more"--molecular biology, linguistics, brain function, etc.--read Jeremy Campbell's Grammatical Man (1982). And so it was with Herbert A. Simon (1916-2001), who won the Nobel Prize in Economics in 1978 for his work in administrative decision-making. Administrative Behavior is his definitive work in this area. He went on to expand his thinking into areas such as artificial intelligence. The book started out as his doctoral dissertation at the University of Chicago, and it is presented here in its 4th and final edition, which gives the original 1st edition text, but with each chapter followed by an update that corrects misconceptions, responds to critics, and shows how new developments in information technology affect his thinking--which, given the precision and strength of the original ideas, isn't really much at all. I was introduced to Simon's work through the first paper in one of his volumes of collected papers. The argument, which corrected a standard solution to a standard decision problem, covered three pages--a quick read at the bookstore--and was so clear and obvious that I remember it exactly and can explain it in minutes. Perhaps because of that experience, I read the chapters of the original Administrative Behavior--clear, but a bit dry and old fashioned--and then appreciate the update chapters, which are more easy-going and conversational. Each is confident, but in a different way. As for usefulness, well, I've always been a believer in telling people what they already know: it confirms and organizes the knowledge that they've pulled together from many different sources and gives them a common basis for understanding. As a business analyst, mediating between business and IT, I find that Administrative Behavior helps me make sense of everything I know about business processes, enterprise architecture, and automated solutions. For an assessment of Simon's contribution to modern thought, read the Wikipedia article. There, he is characterized as a political scientist, though the bulk of the discussion is given over to his contribution to decision sciences. But I like to consider Simon and Shannon together, as, respectively, the business side and the IT side of modern business, industry, and government.

Published by Thriftbooks.com User , 14 years ago
What a great reference for grauduate students of management. A excellent book with current application. Ranks along with Drucker in his approach to decision-making.

Masterpiece on decision-making within organizations

Published by Thriftbooks.com User , 19 years ago
According to Simon, much has been written about actual doings in administrative theory, but less has been written about the processes that precede action, that is, decision-making processes. The main objective of the book is to understand the organizations in terms of decision-making processes. Comprehending the decision-making processes in administrative settings, according to Simon, will give the executives the opportunity of influencing the decisions of lower-level decision makers. The book starts with a sarcastic criticism of classical administrative theory that has organized itself according to the schools and based mostly on principles. Simon demonstrates the limitations of principles-he calls these proverbs-offered by administrative theory scholars by illustrating how these principles contradict each other under specific circumstances. As an example, the author uses the conflict between unity of command and efficiency. When these two principles conflict with each other under some circumstances, these principles themselves do not give us any criteria that will provide us with the priority ranking that will help us to apply one of them. That is, a set of criteria that will guide the application of these principles must be developed. Instead of gathering around schools, Simon proposes that each theory deal with different domains of administrative organizations and knowledge cumulated about these domains be related to each other and be placed in a larger structure.Also, Simon asserts that the fact and value must be separated from each other in a decision-making situation. The truth or wrongness of any decision in any administrative setting must be assessed according to the factual content of the decision, believes the author. I am not sure about how can we separate the value from fact, and Simon does not give any satisfactory answer to this problem. This problem belongs not only to Simon, but also belongs to all scholars that follow logical positivistic tradition of science. The most contributive and thought-provoking chapters of the book are the fourth and fifth chapters in which the author develops the concept "bounded rationality", a concept that has positioned itself in the history of management thinking. First of all, Simon introduces the concept "means-ends hierarchy" to base the rationality on a robust foundation. Rationality is defined as the behavior alternatives (means) that will help the organization members achieve the stated ends above his level of hierarchy. That is, instrumental rationality is accepted. But, Simon asserts that rationality of an individual is bounded because "the number of alternatives he must explore is so great, the information he would need to evaluate them so vast that even an approximation is hard to conceive" (p. 92). Because of the limitations of the psychological environment of the individual, it is impossible for any decision-maker to be purely rational. According to Simon, the pattern of human choice is
Copyright © 2020 Thriftbooks.com Terms of Use | Privacy Policy | Do Not Sell My Personal Information | Accessibility Statement
ThriftBooks® and the ThriftBooks® logo are registered trademarks of Thrift Books Global, LLC