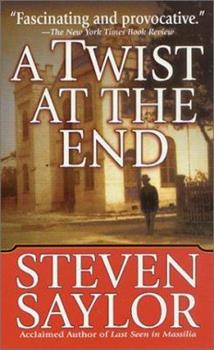 A Twist at The End

Austin, Texas, in 1885 is a place of dust and dreams, quick riches, and wild desires. But "the Servant girl Annihilators" are also making it a city of fear. The first victim, a mulatto housekeeper, is torn from her bed and murdered. Six more women will die, including pretty blond Eula Phillips, who is bank clerk's Will Porter's lover. Over a decade later, living in New York as O. Henry, Will cannot escape his memories--or a blackmailer's merciless...

Was the Austin Slayer Jack the Ripper?

Published by Thriftbooks.com User , 16 years ago
I was fascinated by this book. Every so often, the Austin papers would throw out tantalizing tidbits of information about these 1880's murders. There were never many details given,probably because of the lurid nature of the crimes. They were so heinous, especially since that was considered a "gentler" time. They terrorized Austin and like the Ripper killings, suddenly stopped with no solution. I am not a reader of Saylor's Roman series, so I can't make a comparison with his other works. His research was thorough, and I found the book hard to put down. I loved that he used many characters from that era, including my great-great uncle John Ireland. A previous reviewer criticized this book for showing off too much research and not fleshing out O. Henry more. I am a fan of Mr. Porter's, and I disagree. I liked the inclusion of Elisabet Ney, whose castle-like studio, Formosa, can be visited to this day. Since the crimes were never solved, Saylor had to be a bit cagey with his ending. It would be nice if he tied up everything neatly with a bow, but that would not have been believable, given the amount of fact he included.

Published by Thriftbooks.com User , 17 years ago
Based on what I have read from majority of the prior reviewers, I have discovered a trend. All of the reviewers were fans of the Roma Sub Rosa series, and obviously were looking for more. I had not heard of Steven Saylor (as I am not a "Roman Reader") until an interview on this very book on NPR. The next day I carried a hard cover out of Book People and had finished it within 24 hours, happy to have found a great new author to enjoy. Saylor's has a great ability to bring fact and fiction together, both with his characters and the environment in which he surrounds them, he completely emerges the reader in the events of the time. Afterwards I proceeded to purchase the Roma Sub Rosa series, as I wanted more of Saylor, and I enjoyed each one as much as this book, and also hope there will be more, but I will always be glad my first Saylor novel was "A Twist at the End". I believe every author needs to branch out and try new interests, but it shows here how loyal fans can easily turn on a great writer.

Saylor is a Detective

Published by Thriftbooks.com User , 17 years ago
His research in the Sub Rosa Series paints a very believable picture of life at the end of the Republic. Likewise, his excavation of late 19th Century Central Texas is both accurate and verifiable. Lady liberty of the State Capitol building is every bit as ugly faced as he describes and no Texas City would have survived without a tenderloin district like "Guy Town." ( In Waco, we called it " The Reservation" and it lasted right up until Prohibition and other such noble experiments did so much to unravel the moral fiber of the nation).William Sydney Porter really did live in Austin and San Antonio in the time frame of the novel and no doubt traveled the region on the extensive rail system that then extended all over the fifty-year-old fifedom of Stephen F. Austin and Sam Houston. By 1888, The Texas Capitol plaza was lighted by electric arc lightsThe actions and nature of Saylor's characters are real- or real enough to let the reader suspend disbelief and he unravels a true century-old mystery in a most believable and satisfactory manner. The title " A Twist at the End" is more of a bow to the trademark of the main character than a synopsis of the book. That the reader is able to sort out the mystery well before Mr. Porter learns the whole truth, in no way detracts from the satisfing nature of this story.

Published by Thriftbooks.com User , 19 years ago
"Servant Girl Annihilators"This is the first Steven Saylor book that I have read. And, I actually enjoyed it even though it is apparent early in the book who the killer or killers are, so go figure where the title came from. It is also apparent that Saylor has done extensive research to write this book. From an historical point of view I was enlightened on race relations as well as the rights of women and their place in late 1800's society. Also, how would you like to be a lawman trying to solve these heinous crimes without the use of fingerprints, DNA, etc.? Enjoyed it.

A Twist at the End: A novel of O. Henry

Published by Thriftbooks.com User , 21 years ago
I've long been a fan of Steven Saylor's Roman series, but I wasn't sure what a 19th Century novel would be like (especially since I'm not particularly interested in the setting). I needn't have worried. Mr. Saylor is an exceptionally good writer, and the story is engrossing, touching and facsinating. The more so because it's based on actual events. It's got everything: Romance, murder, tragedy, heroism, and a twist at the end... I couldn't put it down. I highly recommend this book to anyone who enjoys historical fiction.
Copyright © 2020 Thriftbooks.com Terms of Use | Privacy Policy | Do Not Sell My Personal Information | Accessibility Statement
ThriftBooks® and the ThriftBooks® logo are registered trademarks of Thrift Books Global, LLC