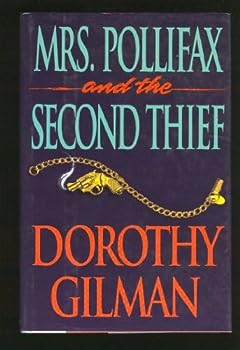 Mrs. Pollifax and the Second Thief

This description may be from another edition of this product. The assignment is a snap: Mrs. Pollifax just has to shoot some pictures at a quiet funeral outside Washington and take them to Sicily, where her old friend Farrell -- a former CIA agent turned art...

Published by Thriftbooks.com User , 11 years ago
This is a good product the only bad thing is the format, I have a CD player and this was MP3. Go my next purchase will be a MP3 player, but I am old fashion and oppose new things.

Mrs. Pollifax and the Second Thief

Published by Thriftbooks.com User , 12 years ago
Gilman really twisted this one around with many humorous lines. enjoy Mrs. P a lot

Published by Thriftbooks.com User , 20 years ago
Once again, grandmother Emily Pollifax, who also happens to have a brown belt in karate, is sent to a funeral of someone she does not know, so she can inconspicuously shoot pictures of the people attending that funeral. Then her CIA boss, Carstairs ships her off to Sicily to find her former agent-buddy John Farrell, who is missing. She is to meet up with another agent, Kate, who will assist her in locating Farrell, and find out if he actually was able to locate a document signed by Julius Caesar. After Mrs. Pollifax leaves on her journey, Carstairs, crazy man, also sends another agent to follow Mrs. Pollifax and make sure she doesn't get hurt or in trouble. The only thing is, Mrs. Pollifax doesn't know another agent is following her, and she winds up giving him a karate chop across the neck, rendering him unconscious. She thinks he's one of the bad guys who wants to kill Farrell.This like all the other Mrs. Pollifax books, is a great joy to read. Once you get into the first chapter, you just don't want to put it down.I'll just HAVE to give THIS book 5 stars, too. You just gotta read it!

Published by Thriftbooks.com User , 22 years ago
stop! before you read this book, read the first book first! (The Unexpected Mrs. Pollifax.) it will let you get to know the funny and "unexpected" grandmother turned CIA agent. This series by dorothy gilman, has got my hooked to the effervescent mrs. pollifax. this is one of my favorites so far. the worst book would have to be the Amazing Mrs. Pollifax. all the others are winners. i have read the whole series twice, and am looking forward to perhaps another book. For those of you who have read the first books, and are about to start this one: enjoy. Those of you who haven't read any Pollifax books yet, save this one for later, but dive right into the series. I promise you won't regret it.

funny and mysteries, i'm addicted to this series!

Published by Thriftbooks.com User , 22 years ago
i thought the plot had interesting directions. not the best mrs. pollifax book, but definately one of them. i think farell is my all-time favorite character. (besides the wonderful mrs.p, of course) a must read for pollifax fans
Copyright © 2020 Thriftbooks.com Terms of Use | Privacy Policy | Do Not Sell My Personal Information | Accessibility Statement
ThriftBooks® and the ThriftBooks® logo are registered trademarks of Thrift Books Global, LLC