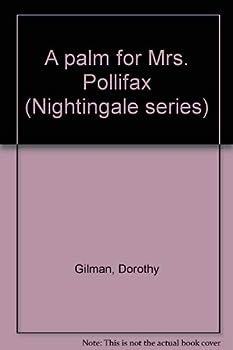 (Book #4 in the Mrs. Pollifax Series)

" Mrs. Pollifax gives Agatha Christie's Miss Marple a rival to reckon with." TORONTO STARA secret agent like no other, Mrs. Pollifax was leading a very full life: Garden Club, karate, yoga--and a little spying now and then. This time the mysterious Mr. Carstairs sent her to Switzerland--to a famous health resort where the world's intelligence agents had gathered. Her mission: to track down a missing package of plutonium--just enough to make a small...

Published by Thriftbooks.com User , 12 years ago
Mrs. Pollifax is getting promoted, sort of. Her latest assignment is not her normal courier work. Instead, she has been booked at a luxury spa in Switzerland. Her assignment is to track down the plutonium that has been stolen from two plants recently and then shipped there. Almost enough has been stolen to make a small atomic bomb, so naturally Carstairs and the rest of the international intelligence community is worried. Upon arriving, Mrs. Pollifax makes contact with her Interpol counterpart and begins to learn what she can about the guests. Robin Burke-Jones is clearly hiding something, but her attention is drawn to the young boy Hafez. Something is upsetting this 10-year-old. And no one ever sees his grandmother. Is he just a distraction? Where is the plutonium? This absolutely delightful book is one of my three favorites in the series. What makes it for me are the characters. Of course, Mrs. Pollifax is her normal resourceful, charming self. But Robin and Hafez are just delights. The book is fairly predictable, and I was a step ahead of Mrs. Pollifax most of the time. But the pace is so fast that it never took long for me to catch up to her. And there are several heart stopping moments along the way. This is like a small time machine back to 1973. You'll love every minute of it and wish it were longer.

Published by Thriftbooks.com User , 18 years ago
Mrs. Pollifax an intrepid senior citizen who works for the CIA, is sent to a Swiss medical clinic to investigate stolen Plutonium. Along the way, she gets involved with a mysterious jewel thief, a precocious child, and sunbathing diva. Can Mrs. Pollifax discover WHO is smuggling the plutonium, and WHY? Or is she destined to be just another casualty at the health spa?I really enjoyed "A Palm for Mrs. Pollifax." Mrs. Pollifax, is a kind, engaging character whose outgoing personality and homey adivce, endear her to friends and enemies alike. In particular I enjoyed the character of Hafez and his grandmother.This was a great edition to the Mrs. Pollifax series, sure to delight readers young AND old.

A Palm for Mrs. Pollifax

Published by Thriftbooks.com User , 20 years ago
I have recently become a fan of the Mrs. Pollifax book series after I saw "The Unexpected Mrs. Pollifax" on TV. It has been giving me so much delight that it is all I read anymore. I think that every one should read this series especialy "A Palm for Mrs. Pollifax".

Published by Thriftbooks.com User , 21 years ago
I am a huge fan of Dorothy Gilman's Mrs. Pollifax series (especially through and including Mrs. Pollifax on Safari -- although I still buy and read each one as soon as they're published). And this is a real winner. Very witty and entertaining. Although I usually give away mysteries after reading them, I can't bear to part with this series (through and including Mrs. Pollifax on Safari), and love rereading them over and over again. VERY highly recommended.

Published by Thriftbooks.com User , 22 years ago
I have recently been rereading all of Dorothy Gilman's Mrs. Pollifax books (some for the first time in over a decade) and have just finished "A Palm for Mrs. Pollifax," her fourth. I love all of the Pollifax books but, so far, this is by far the scariest! I have not found any other Pollifax book to be so full of terror and suspense. Quite often, it is difficult to determine just how she will get out of the many and varied scrapes in which she finds herself. Once again, an incredibly fun and quick read.
Copyright © 2020 Thriftbooks.com Terms of Use | Privacy Policy | Do Not Sell My Personal Information | Accessibility Statement
ThriftBooks® and the ThriftBooks® logo are registered trademarks of Thrift Books Global, LLC