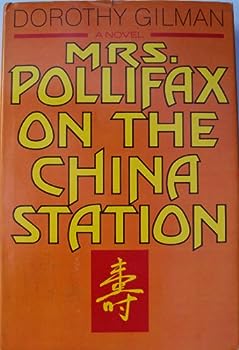 Mrs. Pollifax on the China Station

(Book #6 in the Mrs. Pollifax Series)

This description may be from another edition of this product. "Absorbing and worthwhile . . . You won't want to put the book down."-- Portland Telegram The cheerful Mrs. Virgil (Emily) Pollifax of New Brunswick, New Jersey, is once again plunged headfirst into a...

Published by Thriftbooks.com User , 18 years ago
I really enjoyed Mrs. Pollifax and the China Station. For folks who don't know who Mrs. Pollifax is, she's a 'sweet little old lady' who just happens to work for the CIA and have a brown belt in Karate. The stories are always filled with adventure, suspense, and yet, are for the most part wholesome and 'cozy.'In this installment, Mrs. Pollifax is sent to China disguised as a tourist, to help rescue a prisoner from a labor camp. Armed with very minimal information and a secret partner, Mrs. Pollifax and friends, must find a way to extricate Missing Mr. " X" from China, without getting arrested, detained or worse... Killed!This was a great installment in the Mrs. P. series. Although some of the minor characters were irritating: i.e. Jenny, and 'perfect all-knowing' Iris, I liked seeing Mrs. Pollifax in action, and her interaction with her co-agent was amusing.Definitely a must for Mrs. P. Fans.... A fun, light mystery sure to entertain just about everyone.

Published by Thriftbooks.com User , 18 years ago
Mrs. Pollifax is thrilled when Mr. Carstairs, her boss at the CIA, gives her an assignment to China. As luck would have it, Mrs. P. has recently completed a course in Chinese history, so she is primed and ready to go. She joins a tour group and is told that one of the other group members is actually a CIA agent who will become her partner later on. She tries unsuccessfully to detect her future partner and is very surprised when the agent's identity is revealed. She sees a lot of interesting Chinese countryside and tries to get acquainted with other tour group members. Later in the book, she rides a runaway horse and encounters some rough stuff from a Russian spy. This book, as the others in the series, is charming, and a little romance adds some pizzazz to this one.

Published by Thriftbooks.com User , 20 years ago
Dorothy Gilman rarely ceases to amaze with her talent at keeping the pages turning. In "Mrs. Pollifax on the China Station," Gilman once again creates plausible situations that never fail to catch the reader off guard. Again it is nearly impossible to decide whom to trust. A very fun read!

My favorite of them all!

Published by Thriftbooks.com User , 22 years ago
I'm a big fan of the intrepid Mrs. Pollifax and especially enjoy this book. The intrigue, adventure and characters are wonderful and I find real involvement with the plot. Don't miss a chance to live the spying life vicariously through Emily Pollifax - especially the earlier novels which I have found are much better than her more recent additions!

Published by Thriftbooks.com User , 22 years ago
All of the books in the Mrs. Pollifax series (as well as the whole of Mrs. Gilmans' works) are truly delightful. The reader will be swept away by the adventure, humor and intrigue, all the while learning about the customs and history of foreign lands. You can start with any book in the series, but if you have the chance, read them all. They are not to be missed!
Copyright © 2020 Thriftbooks.com Terms of Use | Privacy Policy | Do Not Sell My Personal Information | Accessibility Statement
ThriftBooks® and the ThriftBooks® logo are registered trademarks of Thrift Books Global, LLC