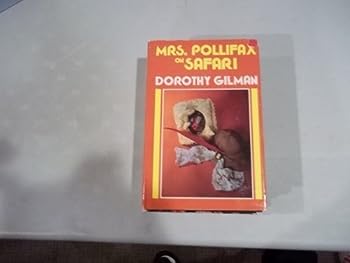 (Book #5 in the Mrs. Pollifax Series)

This description may be from another edition of this product. "Mrs. Pollifax is the American cousin to Agatha Christie's Miss Marple."--Toronto Star Now the incredible Mrs. Pollifax has been sent on a safari to smoke out a very clever international assassin...

Published by Thriftbooks.com User , 12 years ago
Carstairs has gotten intel that the assassin Aristotle is going to be on a safari in Zambia to arrange his next hit. Since no one even knows what he looks like, Carstairs knows this is a great opportunity to gather information. He immediately calls his favorite innocent tourist. Mrs. Pollifax's mission is to take pictures of the other people on the safari. The CIA will use them to figure out who Aristotle really is. But the first night of the safari, Mrs. Pollifax discovers that her film has been stolen. Suddenly, things are personal, and she decides she will not only take the pictures but figure out who Aristotle is. Can she do that when her fellow travelers seem so nice? What secrets might they be hiding? It's been years since I read this book, so I had forgotten most of it. I was surprised to find how slow I felt the book started. There is also a bit of background, but this time it didn't seem as much a part of the story. Once she arrives at the safari, things pick up. There are some fun moments along the way as well as a couple of great twists and a reunion with a character from another book. Mrs. Pollifax is her usual resourceful is slightly naive self. And several of the others characters are equally charming. The book might not be quite as enjoyable as I remembered it, but it will still please fans of the series.

Published by Thriftbooks.com User , 15 years ago
Delightful as ever! I have to admit that I've pictured a safari as hiking through jungles, so this was a true-to-life account of what one is like. So I am getting to travel vicariously and have fun "watching" the amazing Mrs. P.

Published by Thriftbooks.com User , 20 years ago
I've been re-reading the Pollifax books again for the first time in several years and I've enjoyed them all immensely. "Mrs. Pollifax on Safari" is truly a high watermark in the series as Emily finally finds romance and a love that will last. The plot is also full of twists and turns and, like Mrs. Pollifax herself, the reader just isn't sure whom to trust. Another phenomenal entry in the Pollifax canon!

Published by Thriftbooks.com User , 21 years ago
Mrs. Polifax is a lovable charector. Her adventurs have always been mystifying and this one is no exception. Her African adventure is exciting. Plus her mission seems sweet and inocent. Take photographs. Soon however it turns for the worst. Her film is stolen, police make a surprise visit, and then she is Kidnapped. Whats next? Well.... no sorry that would give away too much. Sit down and read this masterpiece. You won't regret it.

Published by Thriftbooks.com User , 22 years ago
Both my husband and I love Mrs Polifax. I have almost read every one, it is now becomming difficult to get the few that we haven't read yet at our library as they are so popular. Are there any adventures that Mrs Polifax hasn't been on yet?
Copyright © 2020 Thriftbooks.com Terms of Use | Privacy Policy | Do Not Sell My Personal Information | Accessibility Statement
ThriftBooks® and the ThriftBooks® logo are registered trademarks of Thrift Books Global, LLC