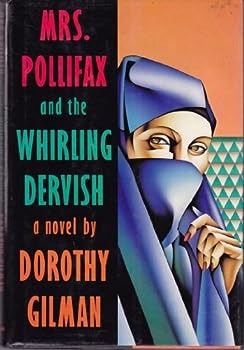 Mrs. Pollifax and the Whirling Dervish

(Book #9 in the Mrs. Pollifax Series)

This description may be from another edition of this product. Mrs. Pollifax is on hand in Morocco to back up an inept CIA agent, and it's a good thing. Their first informant is killed, and Mrs. Pollifax begins to get the idea that her colleague is not who he...

Published by Lina H. , 1 year ago
In this installment, as with the entire Mrs Pollifax series, Dorothy Gilman's subtext is what enriches the reading experience. Her message: Don't give up; trust yourself, trust your instincts. Mrs Pollifax invariably is beyond assistance by the time she gets in serious straits, usually abducted, misled, lost in a foreign country. In "Whirling Dervish" she begins a charted exploration of deeper Morocco, but quickly realizes her guide isn't what he ought to be and ends up on her own in the back country, nevertheless determined to complete her mission and save lives. With memory skills beyond those of people half her age she protects sensitive information from destruction, thus elevating her own role as sole repository of said information--an amazing feat as she commits names and places in a foreign language, along with facial photographs of Moroccan men, to memory. I can barely remember what my own nieces and nephews look like and they don't have beards and turbans. But Mrs Pollifax is quite the late-blooming exception! Again, though, it is Mrs Pollifax's unending resourcefulness that captures the reader, not to short-change her persistent and friend-winning compassion. Her authenticity brings out the best in her unwitting allies who are at first taken aback by her "elderly" aspect, forming bonds of friendship across cultures, religions, age and gender roles. Yet like Agatha Christie's Miss Marple--to whom Mrs Pollifax is often compared--Emily P. knows that evil exists in full strength throughout the world. And she is fully prepared to give it a debilitating karate chop. In short, she is a surprise, and of the series I found this adventure particularly engaging because I have read these books repeatedly for the last few decades and at last can fully relate to the aging protagonist myself. Her adventures and misadventures have become all the more awe-inspiring, if fictitious, all the more outrageous and yet, somehow thinkable; this one is approachably realistic in its detail and relatively simpler, more linear plot. It is the protagonist's irrepressible character that shines through. You don't have to become a CIA operative to begin again in midlife, in widowhood; Mrs Pollifax uses everything in her experience to inform her novel approach to being a "spy," as she calls herself. She brings her full self, unabashedly, to every adventure gone wrong, and puts the world to right once again. The "Whirling Dervish" of the title is but a small moment in the book yet captures the essence of what makes Emily Pollifax so necessary for the CIA, for humanity, and for us, the readers--a distilled point in time that reminds us to be ourselves and receive the gifts offered, person to person, from the heart, across the human experience.

Published by Thriftbooks.com User , 15 years ago
Mrs Pollifax is sent on an assignment to accompany a CIA agent on a mission to verify the identity of 7 foreign agents who are sympathetic to the Western Sahara independence cause. She has photos of the 7, and at least one might end up being an imposter. Along the way, unexpected danger occurs as her fellow CIA agent makes her nervous, and their first foreign contact is murdered. Mrs Pollifax is put into peril and is chased through the desert. The descriptions of the scenery in Morocco are unusually good in this book. I took special interest in this since I recently read a book about Islam and was curious about Whirling Dervishes. In the book, we get a description of the dance of the Dervish. And of course the general sense of adventure is excellent. I highly recommend this book.

Back to the old style!

Published by Thriftbooks.com User , 20 years ago
After the disappointment of "Mrs. Pollifax and the Golden Triangle," Dorothy Gilman went back to the formula that works for the series with "Whirling Dervish." The story of Mrs. Pollifax traveling through a foreign land with a crusty agent makes for intrigue and comedy. A very enjoyable, exciting, quick read. Reminiscent in some ways of both "The Elusive Mrs. Pollifax" and "A Palm for Mrs. Pollifax."

Published by Thriftbooks.com User , 22 years ago
All of the books in the Mrs. Pollifax series (as well as the whole of Mrs. Gilmans' works) are truly delightful. The reader will be swept away by the adventure, humor and intrigue, all the while learning about the customs and history of foreign lands. You can start with any book in the series, but if you have the chance, read them all. They are not to be missed!

Published by Thriftbooks.com User , 22 years ago
This is another excellent installment in the saga of Emily Pollifax, grandmother, gardener, spy. My only complaint is that it's too short. In going through my great-aunt's books I skimmed the Reader's Digest Condensed version for the pictures and found a whole extra final chapter. What happened?

Dorothy Gilman Does it Again!

Published by Thriftbooks.com User , 25 years ago
Once again, Dorothy Gilman brings her reader along with Emily Pollifax on another of her adventures. This time Mrs. Pollifax visits Morocco, from the medina of Fez to a small village on the edge of the desert (complete with camel caravan). As always, Mrs. Pollifax overcomes each obstacle with grace and skill (and the occasional bit of luck) and wins out in the end. We get a mini history lesson of the area and a brief lesson on Sufi whirling. Dorothy Gilman continues to provide lovers of mystery novels with a heroine worthy of being any woman's (or man's) role model. Thanks for another great read, Dorothy.
Copyright © 2020 Thriftbooks.com Terms of Use | Privacy Policy | Do Not Sell My Personal Information | Accessibility Statement
ThriftBooks® and the ThriftBooks® logo are registered trademarks of Thrift Books Global, LLC