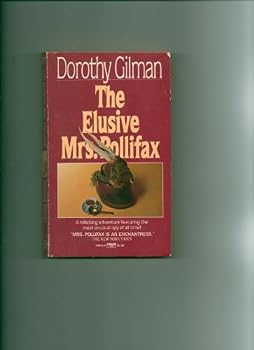 (Book #3 in the Mrs. Pollifax Series)

This description may be from another edition of this product. "Mrs. Pollifax gives Agatha Christie's Miss Marple a rival to reckon with."-- Toronto Star If you make it across the border, get us help. Some of us care. Do you understand? Right now we desperately...

Published by Thriftbooks.com User , 13 years ago
When a CIA agent barely gets out of Bulgaria, he arrives in America with a message. There is an underground movement and they need passports. Carstairs is quick to get the wheels rolling. Despite the reminders from his assistant, Bishop, he heads to New Brunswick, New Jersey to ask Mrs. Pollifax if she will smuggle them into the country in a new hat. Mrs. Pollifax is only too delighted to help and soon she's off to Eastern Europe. Things will be hard since she will be under the watchful eye of Bulgaria's tourist board at all times. But why did someone break into her room in the middle of the night? What happened to the young American Mrs. Pollifax met in the airport? And will she deliver the passports? When I read through this book the first time around, I was disappointed. I'm not sure what my problem was originally because I loved it this time. The adventure is as wild as always. I was alternately turning pages or laughing at people's reactions to Mrs. Pollifax. And the new friends she makes along the way are wonderful. True, the book is ruled by coincidence and isn't believable if you think about it. Trust me, you won't be thinking about those things. You'll have too much fun enjoying the ride. Since the book was written and set in 1971 Eastern Europe, it is historical now. If you keep that in mind, you'll get a good picture of just how bad life was during that period of time. While the adventures are dated now, they are still tons of fun. If you want to enjoy some escapist fiction, look no further then this series.

Published by Thriftbooks.com User , 22 years ago
I am a huge fan of all of Dorothy Gilman's Pollifax books and, of late, I have been enjoying rereading them for the first time in years. I had forgotten that the third book in the series, "The Elusive Mrs. Pollifax," is not only fun and intriguing (like the others) but is downright moving. This is the first of the Pollifax books where the main character becomes more than just a quick-witted, eccentric, elderly spy and is elevated into a feeling, breathing person. Once again, a great book by Dorothy Gilman.

This book is great for teens AND adults!

Published by Thriftbooks.com User , 22 years ago
The Elusive Mrs. Polifax is a book about an old grandmother from New Brunswick, N.J. that is a CIA agent that is sent to take eight forged passports to a strange man that helped Shipkov cross the border of Bulgaria when the police were after Shipkov. Mrs. Polifax meets a young rich boy on the plane ride to Bulgaria. He is arrested for espoinage, or spying, when they arrive at the airport. meet the members of the Underground and try to find a way to get them to help get Phillip Trenda out of Panchevsky Institute. They have a wild night trying to free him with ropes, fire works, one pistol, and two dozen geese in just fifteen minutes..
Copyright © 2020 Thriftbooks.com Terms of Use | Privacy Policy | Do Not Sell My Personal Information | Accessibility Statement
ThriftBooks® and the ThriftBooks® logo are registered trademarks of Thrift Books Global, LLC