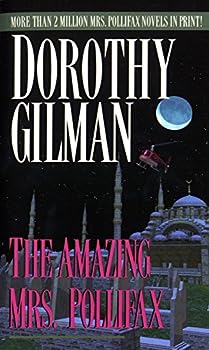 (Book #2 in the Mrs. Pollifax Series)

This description may be from another edition of this product. Once again the irrepressible Mrs. Pollifax, that very special agent with her own very special brand of logic, is off on an incredible escapade of international intrigue . . . from the exotic towns and...

Published by Thriftbooks.com User , 15 years ago
After her first adventure, Mrs. Pollifax figured she'd never hear from the CIA again. Naturally, when Mr. Carstairs calls and asks her to do another bit of currier work, she's surprised. She recklessly agrees to go. And this time, Carstairs is taking no chances. He's assigning another agent to follow Mrs. Pollifax around and keep her out of trouble. A notorious Soviet agent has recently defected, and Mrs. Pollifax is to go to Turkey to meet her and help her get to US soil. Naturally, every agency in the world is after this agent, so the danger will be fierce. Her first night in Turkey, Mrs. Pollifax makes contact, only to be arrested by the local police. Then her shadow is murdered. Alone in a foreign land, Mrs. Pollifax has only her instincts and a young man she just happened to meet to help her. Can she get herself and the agent safely back to the States? While the first book needed time to set up the premise of the series, this book starts right away. Like Mrs. Pollifax, it can leave the reader a little breathless. Fortunately, there's a little set up before the plot starts in earnest, but once it starts, hold on! The pace is fast and the danger almost constant. Again, there are some plot points that seem a little far fetched, but the book is such fun the reader won't care. Part of the fun is the characters. Mrs. Pollifax herself is a dear. Her unique perspective on the world makes anything fun. She's taken up karate between books, a skill that comes in quite handy through the rest of the series. In this book, great characters surround her. The heroes are lovable and the villains menacing. This book was first written in 1970, a fact that is key to a few moments in the story. The historical context of the book helps bring things to an even more vivid life. While coincidence shows up a time or two, the overall effect is minor. This second book in the series is another winner. You'll be turning pages desperately trying to find out what danger awaits Mrs. Pollifax next.

Published by Thriftbooks.com User , 15 years ago
Ms. Gilman has created a delightful character in Emily Pollifax - adventuresome and resourceful. Tough too. And always refreshing!

Published by Thriftbooks.com User , 18 years ago
In the follow-up to the charming debut novel, The Unexpected Mrs. Pollifax, Dorothy Gilman writes another book filled with intrigue and heroism. Mrs. Pollifax, a widow who enjoys teas and garden clubs, sets out on her second courier job for the CIA, a mission which starts in Istanbul. Searching for a missing woman (an agent with international ties), Mrs. Pollifax poses as a tourist to track down the woman and smuggle her safely out of the country. Protected by only an agent, who has no idea what her real mission is to be, Mrs. Pollifax must use her newly acquired knowledge of karate and her unflappable nature to charm her way out of some sticky situations. Hair-raising as always, Mrs. Pollifax's second adventure will leave you wanting more!I was thrilled to read the second adventure of Mrs. Pollifax, and enjoyed every moment spent with her on the case. Mrs. Pollifax is not a person that you would initially feel would make a good CIA agent. She is elderly, loves to wear outlandish hats, and finds a way to talk and get to know everyone around her. But it is just these qualities that make her so invisible in the world of spies, and even the most cynical of agents falls under her spell. I loved the fact that Mrs. Pollifax learned karate (since she hates guns I worried about how she could plausibly protect herself) and that she was just as lovable yet determined as she was in the previous book. If you have not tried this series, pick up a copy of this book and the previous book, The Unexpected Mrs. Pollifax, and join the millions of others who are charmed by this beloved character! Enjoy!A Cozy Mystery Lover

Published by Thriftbooks.com User , 18 years ago
Mrs. Pollifax is back and better than ever in the second book of the series. The mild-mannered widow who becomes an unlikely CIA agent is called again by her contact Mr. Carstairs. This time she is asked to go to Turkey where she will be in contact with Magda Ferenci-Sabo, a Russian spy who is defecting to the Free World. She is to give Magda money and a passport which will enable her to leave Turkey. Carstairs gives Mrs. Pollifax only 30 minutes to get ready, but the plucky widow is ready for another adventure. She flies to Turkey and sees Magda, butshe is unable to make contact before Magda flees. Thus, Mrs. Pollifax embarks on a wild ride, matching wits with a diabolicaldouble agent and surviving imprisonment, but along the way she makes friends with some unlikely allies. This book is delightfulride from beginning to end and should be pleasing to "cozy" fans.

Published by Thriftbooks.com User , 22 years ago
Mrs. Pollifax is the lady I would aspire to be...old enough to have experience and young enough to have a zest for life. Her ingenious methods of dealing with disaster will keep you reading through the night. 3 cheers for Emily!
Copyright © 2020 Thriftbooks.com Terms of Use | Privacy Policy | Do Not Sell My Personal Information | Accessibility Statement
ThriftBooks® and the ThriftBooks® logo are registered trademarks of Thrift Books Global, LLC