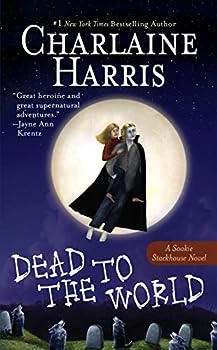 Psychic Sookie Stackhouse has her hands full with an amnesiac vampire in the fourth seductive novel in the #1 New York Times bestselling series--the inspiration for the HBO(R) original series True... This description may be from another edition of this product.

My favorite one in the series!

Published by Thriftbooks.com User , 18 years ago
I have loved this series since Dead Until Dark and I tried to resist reading the newest installment Dead to the World, for the next book won't be out in quite some time. This is the best Southern Vampire novel in the entire series! This is of course my favorite installment and I hated to see it end and savored the last pages with gusto. Sookie Stackhouse is still mourning her breakup with Bill when he tells her that he's off to Peru to meet with some vampires there. But Sookie isn't able to think about Bill much when, on her drive home from work, she finds vampire Eric, scared and vulnerable, wandering the streets in the middle of the night with almost no clothes on. He's lost his memory, has no idea what has happened to him, so Sookie decides to look after him. She is shocked to find that he is no longer the no-nonsense vampire trying to get into her pants that he'd once been. It appears that some witches have put a spell on Eric and are planning to wreak havoc among the supernaturals in Shreveport. To make matters worse, Sookie's brother is missing. Sookie seeks the help of the local vampires, werewolves and other shape shifters, but will they be able to fight against the most powerful witches ever encountered? There are many twists throughout the novel. As said earlier, this is my favorite installment. There is a lot of action and Sookie is quite a tough cookie in this one. She is also reaching an uncertain future regarding her love life. She is not over Bill, but she is attracted to vampire leader Eric, werewolf Alcide and shape-shifter Sam. I have a feeling that the next installment will be quite interesting in the relationship department. I adore Eric. He sounds so scrumptious! He is what made this novel so memorable to me. He is the most interesting and sexiest of the male characters in the book, and there are quite a few hot men in this series! But that scene with Eric... I won't spoil it for the reader. Suffice it to say that it was the most delectable scene in the book. Anyway, I cannot recommend Dead to the World enough. This is the best part of Charlaine Harris's series thus far. The only bad thing is that I have read all of the books now and I will have to wait who knows how long till the next one. The good news is that Ms. Harris is releasing a novella based on this series in the Bite anthology next year. In the meantime, I strongly urge you to read this, but make sure you read the previous three installments before you do.

Finishing this has left me feeling ridiculously melacholy.

Published by Thriftbooks.com User , 18 years ago
I cant believe it. I have now gone through all of the books written in this series thus far and the plot has reached a point where I feel I could burst and now I have to WAIT for the next one to be published...oh, I could just D-I-E! First of all, if ever there was a "dream plot" that I would like to be involved in that had me running for my life every 5 minutes, well, the plot of "Dead to the World" would be it. I can explain in one word quite simply: ERIC. I have found him to be outrageously appealing from day one and Im only loving him more as the series progresses...just the thought of finding him along the road all vulnerable and in love with me is enough incentive to put up with Sookies unique troubles for a while. Truly, I love the man. I am so anxious to see what is going to develop and OMG I LLLLOOOVVED the ending. I loved it.... I want that coat.

Witch Wolf Was It?

Published by Thriftbooks.com User , 18 years ago
For me, Charlaine Harris represents what vampire romance stories could be if they let go of all the solemn gothic trappings that they only too often hide a lack of plot behind. Sookie Stackhouse proves that a down to earth waitress in a small town Louisiana bar can be just as effective a heroine as your basic kinky necromancer type. Sookie's not quite normal - she can read minds - but she has a straightforward approach to the weirdness within and without her that is like a breath of fresh air. This is the fourth book in the series, and finds Sookie back in Bon Temps still fuming at the perfidy of her ex-boyfriend Bill the vampire (yes, I said Bill). In fact all that Sookie wants to do is wait on tables, watch cable, and not get beaten up by yet another supernatural creature. In fact, when Bill announces he is bound for Peru to do research, she is even a bit pleased. But nothing lasts, and while driving home one night she finds Eric, the Area 5 vampire sheriff wandering around in various states of undress, and lacking any memory of who he was. Suddenly Sookie, who finds the new Eric much nicer than the old one, is embroiled in a war that pits a coven of extortionist witches against an every supernatural creature in the Shrevesport area. To make matters worse, Sookie's brother disappears, leaving her worried to death and depending on a mixed crew of vampires, weres, and a somewhat ditzy fairy for support and protection. Of course, the secret of Harris's success is that Sookie is a lot tougher than you might think. Yes, she is emotional, attracted to the spookiest men, and lacks fashion sense, but underneath it all she has learned to pick up the pieces and carry on. If you don't count her taste in men, what Sookie does always makes sense. And her wry, humble style cannot fail to charm. Harris manages to tread the line between sexiness and bad taste with surer feet than Laurell Hamilton. As a result the eroticism never distracts from the plot and the solid narrative style that Sookie uses. It you are interested in a new twist on the girl-meets-vampire genre these books are a great place to start.

Maybe the best Sookie yet

Published by Thriftbooks.com User , 18 years ago
With her vampire ex-boyfriend heading out of town, Sookie Stackhouse looks forward to more peaceful (and lonely) times in small-town Louisianna. But when her brother starts dating a shape-shifter and hunky vampire Sheriff, Eric loses his memory and Sookie finds him running naked near her house, she realizes that the times will be anything but peaceful. With his memory intact, Eric was a jerk but he's sort of sweet without it--and Sookie has a hard time fighting the attraction. Still, she's made a new year's resolution--no more getting beat up. And if she hangs with Eric and the other vampires, she knows she's going to get hurt. When her brother turns up missing, though, Sookie realizes that she can't just lay low. And with witches trying to take over nearby Shreveport (where Eric is from), it doesn't take long before she's in the middle of the fight of her life. There is one bit of good news. Despite a great figure and good looks, Sookie's mind-reading always scared away the normal males. But as she meets shifters, witches, vampires, and even a fairy, there are plenty of non-human and half-human males who find Sookie just what they are looking for--assuming she can survive long enough to create a relationship. Author Charlaine Harris mixes up humor, suspense, magic, and a really nice character in Sookie Stackhouse for an especially strong entry into her Southern Vampire series. In a world where amoral vampires and amoral humans wage war for control, Sookie provides an ethical perspective and a bit of balance. Her concern for her missing brother and her ambivalent feelings toward Eric increase reader empathy with Sookie and our stakes in the outcome. I've enjoyed each of the Southern Vampire novels but DEAD TO THE WORLD may just be the best.

Published by Thriftbooks.com User , 18 years ago
Dead to the World by Charlaine Harris is an excellent vampire novel. I must admit that I found Ms. Harris' vampire series when trying to find something to read while waiting on a new Anita Blake book by L. Hamilton. Am I ever glad that I discovered Sookie Stackhouse! You don't need to be from the South to enjoy the Southern flavor of this story!Sookie is not your typical vampire novel heroine. She is neither very strong physically, nor is she very sure of herself emotionally. She's not had an easy life because of being telepathic in a small town, and that was before the changes caused in her life after the "coming out" of the vampires. Her ex-boyfriend, Bill the Vampire (as he's known around town), is out of the country and she's not sure she wants to see him anyway after her last "adventure" with him in Mississippi (you must read "Club Dead" to find out this part of the story). Sookie's story begins in "Dead Until Dark" where the main characters of the series are introduced. It's an interesting and entertaining story, which continues in "Living Dead in Dallas". I would recommend these books to anyone who enjoys vampire stories! They are truly worth reading (and reading in order)!This novel begins after a New Year's Eve party at Merlotte's (the bar where Sookie works). She is driving home when she nearly runs down a man clad in only jeans running down her road. When she stops, she finds that she knows the man and that he has no idea who he is although he does realize that he is a vampire. It turns out to be her ex-boyfriend's boss, Eric. As you've probably noted from the book description and the other reviews, there are twists and turns here aplenty. Some of the little things that runs through Sookie's mind are laugh out loud funny and I found myself doing just that many times.I regret that the book was not longer (but then I usually feel that way with books I love). I hope that in the future we see more of Alcide. I think he'd be good for Sookie. He seems almost too innocent sometimes but he's refreshing and obviously still wants to believe the best about people, which is such a rare thing in the world. I was surprised to find that I was happy with all but the last twist in the Sookie/Eric relationship. I loved to see his vulnerable side, tempered with his protective side. I enjoyed the introduction of the new shifters and the other assorted new additions to the character list, including the introduction of witches and a fairy into the mixture. I would also like to see Sookie's brother, Jason, grow up a bit and stop being such a male bimbo -- although I would hate for him to lose his charm and playfulness.All in all, the book was definitely a Wonderful story! As I said, I would recommend it to anyone!
Trustpilot
Copyright © 2022 Thriftbooks.com Terms of Use | Privacy Policy | Do Not Sell or Share My Personal Information | Accessibility Statement
ThriftBooks® and the ThriftBooks® logo are registered trademarks of Thrift Books Global, LLC