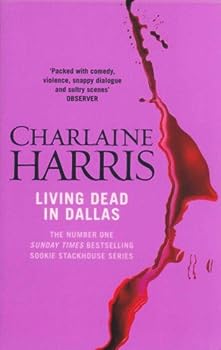 (Book #2 in the Sookie Stackhouse Series)

This description may be from another edition of this product. The second novel in #1 New York Times bestselling author Charlaine Harris's "addictively entertaining"( Locus ) Sookie Stackhouse series. Even though Sookie has her own vampire to look out for...

Published by MiaD , 10 months ago
Charlaine Harris builds the back of the Sookie Stackhouse novels off Sookie herself. Which sounds like a self-evident duh sort of thing, but most romance/mystery books build female protagonists that are almost always carbon copies of each other. In an attempt to be 'different' most have the same lead , someone with a biting sense of humour/sassy, a giant flaw that's meant to humanize them (afraid of blood,clumsy ect) and a sassy ethnic best friend so white ladies feel like they're not racist look, an ethnic. Sookie may hit a few of those tiers, but she is a person through the book, and even her "ethnics" that are sprinkled throughout are more human than most other books.

Published by Leslie , 2 years ago
Kept me interested, didn't want to put it down at times.

Published by Thriftbooks.com User , 17 years ago
Our favorite cocktail waitress is back again for another adventure. Living Dead in Dallas introduces us to the various political goings on in the vampire world. Sookie and the Vampire Bill have been invited to Dallas. The Dallas Vampire's need Sookie's telepathic skills and she is drafted by Eric, the Viking vampire sheriff of Area 5 to help them. Sookie feels obligated to Eric as he has recently saved her from a very nasty creature with a venomous bit. Off to Dallas she and Bill will go.Of course things are not as they seem. With a very scary group of religious nuts and a suicidal vampire, Sookie is soon overwhelmed with all that is happening. To complicate life even more, back in Bon Temps one of Sookie's co-workers meets a grisly end. Life will never be simple for Sookie and Bill, but Sookie never expected this much action.Living Dead in Dallas is another fantastic adventure created by Charlaine Harris. From page one we are thrust into Sookie and Bill's world and the action does not slow down much at all. I loved the description of Dallas with its vampire airline and hotel. This is the kind of book you read all day and night because you are unable to put it down.Charlaine Harris is the other of three more Sookie novels; Dead Until Dark, Club Dead, and Dead to the World, to be published May, 2004. She is also the author of two popular mystery series; the Aurora Tegarden series and the Lily Bard Shakespeare series.

Published by Thriftbooks.com User , 19 years ago
This is the second in the Southern Vampire series and continues the adventures of Sookie Stackhouse, a telepathic Southern waitress, and Bill, her vampire boyfriend. Although I really enjoyed Dead Until Dark, I thought that Living Dead in Dallas was better. It had a faster pace and more subplots to keep me interested. I recommend reading the first book, though, because you will appreciate the characters more. And speaking of characters - every character in Charlaine Harris' books is very memorable and fun to get to know. Sookie is just a scream and readers will fall in love with Bill as he struggles to balance between being a vampire and being human. I love the main characters, but I also want to know more about the supporting characters - the blond-Adonis vampire Eric, the geeky head vampire Stan, the insane maenad, and many, many more. All of Harris' characters are fun to get to know and I hope that I will see more of them in the next book.Charlaine Harris also has some very interesting vampire ideas that make them seem more real. She adds little random touches throughout the novel that answer questions that you never really knew that you had. For example, some vampires can fly, but how do the rest of them get around? They fly Anubis air, of course. The airline will transport vampires in their coffins during the day and is heavily guarded so that they cannot be attacked. Once you have reached your destination, the discerning vampire will immediately seek out the finest in accomodations. In Dallas, The Silent Shore is a vampire-friendly hotel that even offers room service delivery of "snacks" in whatever blood type you prefer. If you have not done yourself the favor of reading Charlaine Harris' Southern Vampire books, I recommend that you go to your nearest bookstore and buy them now (and be prepared to stay up late to finish them).

Published by Thriftbooks.com User , 19 years ago
Charlaine Harris's Southern Vampire novels (Dead Until Dark and LIving Dead in Dallas)are reminiscent of Laurell K. Hamilton's Anita Blake series,(a series I thoroughly enjoy reading over and over) but Sookie, the heroine of Ms. Harris's novels is less like Anita Blake and more like Stephanie Plum, Janet Evanovich's bounty Hunter ( another thoroughly enjoyable and re-readable series) Anita Blake is more polished and experienced, more at ease with her supernatural abilities than Sookie. Sookie is more human and fallible, kind of a Calamity Jane, but very likable. Her budding romance with a newly arrived vampire is fraught with misunderstandings between species, but they manage to communicate very well anyway. The vampires in this series make no excuses for what they are, predators, but still have a not so nasty side, especially since they are trying to "mainstream" and live with humans. Ms Harris throws in a few shapeshifters, colorful local residents, and reprehensible villains, both human and supernatural. Prepare to sit yourself down for a wonderful read. The plots were well thought out and equally well written. I am eagerly looking forward to her the next book in this series.

You Have Got to Love Sookie!

Published by Thriftbooks.com User , 19 years ago
I normally expect my heroines to be tough, women who can coolly assess a situation then kick butt. What I got in Living Dead in Dallas by Charlaine Harris, is a heroine who is kind of kooky, reads minds, dates a vampire, and isn't afraid to yell for help when she's in a situation way over her head. While this sounds like a turn off from what I normally expect, believe me, it isn't. There is no way not to like cocktail waitress Sookie Stackhouse. She's got a figure to kill for, the uncanny ability to read minds, doesn't care about conventional society, and is pretty content with her life until she is reminded she is on loan out to help the vampires. It seems that Sookie and her vampire boyfriend Bill have agreed for Sookie to help the vampires when they need help. The leader of the local nest of vampires, Eric is sending Sookie to Dallas to look for a missing vampire. For those of you who have read the first book in this series, take heart, the gorgeous Eric plays a larger role. Now take a backwater gal out of her little hometown and send her by plane to Dallas with her boyfriend traveling in a coffin and see what happens! Sookie ends up way over her head dealing with vampires, werewolves, and fanatics who want to end the existence of all supernatural beings. There is also a subplot with Sookie dealing with the death of one of her friends who just happened to be a member of a sex club. Use your imagination and you can pretty well guess what happens with this plot!Charlaine Harris has taken Sookie to another level. While she is still the ditsy waitress we were first introduced to in Dead Until Dark, she has managed to develop into a likeable heroine, who while still unconventional, captivates our attention and makes us root for her throughout the book. Like everyone else, I can't wait until the next book to see what new mess Sookie manages to get into.

The Second Chapter of Sookie, Bill and a cast of quirky folk

Published by Thriftbooks.com User , 19 years ago
I have eagerly awaited the second book in Ms. Harris' Southern Vampire Series. Dead Until Dark, the first book, was the best book I read last year. I adored it. It was everything Anita Blake SHOULD have been. GREAT characters that you just love. Sookie, the heroine, a telepath who dates a vampire named Bill. Bill, the post civil war vamp who seems to have lots of secrets still. The characters that you loved in DUD (Dead Until Dark) like Sam, Sookie's boss who is a shapeshifter, Eric, the yummy stud major vamp from this club who lusts after Sookie, all make an appearance in this book too. (Though not as much Sam as you want, I'm sure ;)The premise:The book opens with a murder. But that storyline is quickly put on the backburner when Eric summons Sookie to help him out. It seems a vamp family in Dallas is missing one of theirs and they need Sookie's telepathic skills to interrogate possible witnesses. Thus, Sookie and boyfriend Billy travel to Dallas, where they encounter more interesting characters, from telepaths, to more shapeshifters and of course, more vamps. But the most frightening people in this book are the humans, and that is simply a biological definition, not a distinction. I like how Ms. Harris shows us that even the most ordinary of us have a little demon inside. After things are resolved in Dallas, Sookie returns to her town, where the murder plot begins to resolve itself. If you love romance, mystery, adventure and humor, then you will LOVE this book. I cannot wait until the next in this series. Living Dead in Dallas is a definite keeper!
Copyright © 2020 Thriftbooks.com Terms of Use | Privacy Policy | Do Not Sell My Personal Information | Accessibility Statement
ThriftBooks® and the ThriftBooks® logo are registered trademarks of Thrift Books Global, LLC