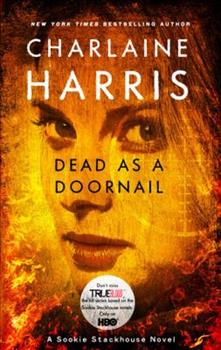 Dead as a Doornail

(Book #5 in the Sookie Stackhouse Series)

Small town cocktail waitress Sookie Stackhouse's supernatural existence puts her in the line of fire in the fifth novel in the #1 New York Times bestselling series. When Sookie Stackhouse sees her brother Jason's eyes start to change, she knows he's about to turn into a were-panther for the first time. But her concern becomes cold fear when a sniper sets his deadly sights on the local changeling population, and Jason's new panther brethren suspect...

Published by Rose Bryce , 2 years ago
I just read this book and can't wait to read more by Ms. Harris! What a delightful writer!

Published by Thriftbooks.com User , 17 years ago
"I have read all the books in this series and loved every one. I particularly like the way the character of Sookie Stackhouse matures and becomes increasingly self confident and self reliant in each book. And the books get better with each one. I don't need sex scenes in a book to enjoy it, and quite frankly, that's one reason I only read about 20 pages of one Anita Blake book-then never read another. That particular series is an insult to intelligence. I read for enjoyable characterizations, wit, and charm." This was one of the reviews from a reviewer and I have to say, I totally agree. I perfer Charlain over LKH in many ways. The characters are much more vibrant and likable. Another excellent author that just as good as Ms. Harris is D.N. Simmons, fans should check her out, i'm sure you won't be disappointed.

Let's all get shot! Let's all kiss Sookie!

Published by Thriftbooks.com User , 17 years ago
The action doesn't let up in this one. Another major character's in the hospital before the previous one leaves. And pretty much every male in the book except Claude the gay fairy (no, that's not redundant) makes some sort of romantic overture to Sookie, and even he asks her for a personal favor! If you haven't read the previous book in this series, you should do that. I'll wait while you order "Dead to the World" (ISBN: 0441012183). There, back? OK, once you've caught up, you'll know that in that episode, Eric the vampire lost his memory, stayed at Sookie's place, and got real close. When he regained his memory, however, he did not remember any details of his interlude with Sookie. So... Sam's has a new cook - seems to happen almost every volume. Tara has a new boyfriend - also seems to happen regularly. But then the shooting starts: *Calvin Norris gets shot, seriously injured. *Sam gets shot, in the leg. *Sookie gets shot, a shoulder graze. *Dawson, a Were bodyguard, gets shot, seriously injured. And then, in terms of who's who vis a vis Sookie: *Calvin Norris is still interested in Sookie, and in fact they do get in a serious kiss, which surprises Sookie. *Claudine kisses Sookie a couple times, though, since she's Sookie's fairy godmother, what that might mean is ambiguous. Claudine certainly plays up a hint to others that it might be serious, when such a suggestion is useful. *Charles Twining, the new bartender at Fangtasia, is intensely interested in Sookie, although respectful. *Eric is still interested in Sookie, though he's not sure why, and he wants to find out what went on, and he does kiss Sookie again in this book. *Even good ol' Vampire Bill gets in a few licks, including sharing (innocently, this time) Sookie's hospital bed. *Alcide Herveax, the Were, attempts to continue his courtship of Sookie, sort of, escorting her to the sort of thing where other people will assume one's intentions are serious. (If you recall, they were once engaged for 10 minutes.) *And the one we've been waiting for - Sam kisses Sookie, and it might have gone further... yes, admit it, you've been expecting Sookie to finally realize that Sam more than just admires her as a barmaid for several volumes now!! Perhaps the biggest surprise for me what the sudden intersection with one of Harris's other series, a straightforward mystery series which has heretofore had no hints of fantasy. Lily Bard, who lives in Shakespeare, Arkansas, has been the heroine of such books as "Shakespeare's Christmas" and "Shakespeare's Trollop" and in this book she pops up, having finally married Jack Leeds (isn't that a great name for a PI? Leeds?) as they are investigating Debbie Pelt's disappearance. It's odd seeing Lily referred to as Lily Leeds, after years of seeing her as Lily Bard. Anyway, for those who have only been reading Harris's vampire books, now you are informed that those two characters, who pop up for a couple of chapters here, are actually a whole 'nother series

Another excellent installment in the Southern Vampire series

Published by Thriftbooks.com User , 17 years ago
Sookie Stackhouse is a telepathic barmaid in rural Bon Temps, Louisiana. She has been shunned by her community for her seeming "otherness" but when she meets a vampire named Bill, she is ushered into a semi-secret supernatural community in a very big way. Dead as a Doornail is the fifth book in the series. Basically, it ties up several loose ends from the fourth book (Dead to the World), addresses some interesting current events, and sets the stage for book number six. I won't try to recap the plot, as it has been done more than adequately by Publisher's Weekly (see above) and by other reviewers. By the time I got about one-third of the way through the book, I decided that plot-wise, Dead as a Doornail was perhaps not as strong as the previous four books in the series. However, I soon understood that the plot is actually quite strong, and in addition, this book covered some material that made the previous books all the richer and paved the way for new developments. Some might call this a "bridge" book; I personally don't think that's a bad thing. There was more than plenty going on, much character development, and it was a whole lot of fun. I do think the next book in the series will be all the better for it. I agree with the reviewer who cautions readers to take Sookie on her own terms. Despite the plethora of handsome and available men, Sookie isn't Anita. And I am grateful for that. It is true that as the series has unfolded, we have seen that Sookie is a very fine person but that her abilities have put her at odds with her fellow humans, so wouldn't she look to the supernatural community for love? With regard to the lack of sex in this book: isn't that a good thing? It seems to me that Sookie is waiting for the right man to come along. Sure, she has plenty of suitors, but she's basically a good girl who wants lasting love and a family, and unfortunately, she hasn't found Mr. Right yet. I would like to take issue with one thing: in Dead to the World, the possibility of a romance between Kevin and Kenya was brought up, and then ignored in Dead as a Doornail. Now, is that nice? :)

Published by Thriftbooks.com User , 17 years ago
I am finding the Sookie Stackhouse novels to be very entertaining and amusing. They are a hybrid cross between romance and the supernatural. This book brings some of the other secondary characters from previous novels back in and then some. Sookie is dealing with Eric who still doesn't remember their tryst, but seems to be figuring it out. Bill seems concerned, but knows he's pretty much out the door. Sam is shot which brings in Eric's bartender as a sub. Alcide the werewolf is flirting around with Sookie and visiting now and then. Entertaining and light hearted.

Published by Thriftbooks.com User , 17 years ago
This is the latest in a series of vampire mystery romances (using the term loosely). Sookie Stackhouse is a blonde, lowly-educated, telepathic barmaid. She's also reluctantly involved with the werewolves, shifters, fairies, witches and vampires near her rural Southern home. Her brother has been turned into a werepanther and is suspected of being a serial killer, so Sookie has to find the real killer before her brother is falsely accused. Meanwhile, a sniper is out to kill the shifters, people close to her are injured, her house needs extensive repairs, and all she really wants to do is pay her bills. Oh, and there's a were succession fight, several new vampires, and her first love vampire Bill shows up again... Some reviewers have expressed a dislike of the paranormal men who seem to be attracted to Sookie. To me it all seemed very logical. We know Sookie is pretty, blonde and attractively built. However, normal human men shun her because she's "crazy". The paranormal men know she's very, very special and that's what's so attractive about her. Alcide (werewolf) and Calvin (werepanther) don't want to marry another werewolf and regional werepanther, respectively. They're both attracted to Sookie because she's not from their communities, yet she knows about them (not to mention she's nice and smells good...) Bill and Eric (vampires) both want her, Bill as her ex and Eric because there's something about Sookie he just can't resist (perhaps because she resists him?). Quinn (can't tell you what he is, it'd be a spoiler) likes her because she's smart, brave and tastes good. Sam (shifter) has worked with her for more than 3 years, and he's always been attracted to her. So to me, it seems like of logical. She's really pretty, she knows that werewolves, shifters, etc. exist, her blood tastes special, she's valiant and loyal, and she's special in her own way. By the way, Sookie doesn't get tangled up with any of her admirers in this book, she's nice and single.
Trustpilot
Copyright © 2022 Thriftbooks.com Terms of Use | Privacy Policy | Do Not Sell or Share My Personal Information | Accessibility Statement
ThriftBooks® and the ThriftBooks® logo are registered trademarks of Thrift Books Global, LLC