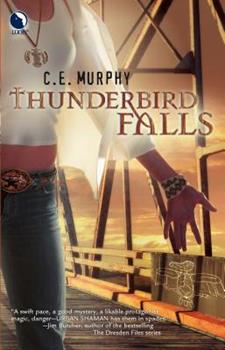 (Book #2 in the Walker Papers Series)

Thunderbird Falls by C.E. Murphy released on Apr 25, 2006 is available now for purchase.

Published by Thriftbooks.com User , 14 years ago
Enjoyed it I like the Seattle setting. Only thing to make it better is if the main herione was local native american. It was very much lie the first. Author could build on the romance more. The title is misleading.

Published by Thriftbooks.com User , 15 years ago
It has to be perplexing to want to be a car mechanic and find yourself a cop on the beat instead. But for Joanne Walker this was only the beginning. Now she has discovered she is destined to be a shaman and that doesn't sit well with her at all. After surviving being fatally stabbed while saving the world in the previous volume - Urban Shaman - Joanne deserves a rest. But what she gets is a body in the Gym shower. When Joanne slips into the Dead Zone to find out how the young woman died she finds herself out of her depth and in deep trouble. A spirit that shouldn't have noticed her has, and thus begins another series of events where, kicking and screaming, Joanne must save the world once again. Joanne investigates the death on her own and finds her path keeps criss-crossing that of a coven of witches who apparently need her help. The dead woman played an important role in the covens plans and Joanne would be the perfect replacement. All she has to is help with the reincarnation of and ancient wizard who is also intent on saving the world. Or maybe he isn't. Joanne must puzzle out the answers to this question and many others if she is to drag Seattle back from the edge of disaster, and, incidentally, get her head together about her spiritual powers. I find I like this series more than I ever expected. There's no lack of books in the occult suspense/romance genre and it's always refreshing to read a book with a strong female lead that doesn't keep trying to commit suicide or get tangled up in kinky sex. C. E. Murphy is a strong writer, and her characters are interesting and believable. Joanne is a sassy, uppity lady with a good share of intelligence dealing with a very complicated reality. You can't help but like her, or her friend Gary the cab driver, or Captain Morrison, her boss and foremost critic. The story, with Joanne as narrator, moves well, and has many flashes of enjoyable sarcasm. Despite being the second volume, I think Thunderbird Falls can be read on its own - but you will want to read Urban Shaman anyway, so get both.

Published by Thriftbooks.com User , 15 years ago
This book will keep you riveted, especially if you are interested in magic, mayhem with a twist. This is like Anita Blake before the over done sex. I finished this book in a day, I couldn't put it down. I will never see snakes the same way without wondering... Remember, when you make a promise, you have to keep your end of the bargain. Joanna forgets and pays a price for this. The magic and what Joanna learns while practicing will keep you entranced.

Published by Thriftbooks.com User , 16 years ago
C.E. Murphy has a gift of drawing the reader into her world and making the unbelievable seem believable. THUNDERBIRD FALLS is no exception as she once again weaves her magic. Joanne Walker is a reluctant shaman. She didn't believe in the supernatural until events left her with no other choice (see URBAN SHAMAN). Now, as a beat cop, she discovers the dead body of Cassandra Tucker. Cassandra was part of a coven that hoped to bring Virissong back from the Lower World. The coven believes that Virissong's return will rebalance the world and stop the heat wave that is decimating the city's resources. Joanne joins the coven but is distracted by the hospitalization of her cabbie friend, Gary, who has a heart attack. Her distraction prevents her from seeing that something is terribly wrong as she accidentally assists with releasing demonic spirits on Seattle. Will Joanne be able to stop the demons in time to save Seattle? And why has her spirit guide, Coyote, abandoned her? Joanne Walker is the kind of person you can envision yourself hanging out with on a Saturday afternoon. She is down-to-earth and not afraid to question herself. She is a bit naive in regards to her shamanistic powers, but that is to be expected from someone who was a skeptic until recently. Her sense of humor keeps her from appearing arrogant and is what makes her character so realistic. It is also the strength of her character that makes this series so entertaining. This story can be read as a stand alone novel. However, this reviewer highly recommends that readers first read URBAN SHAMAN or the novella in WINTER MOON to better understand Joanne's character and her relationship with Coyote. Readers new to the series may be a bit confused by the whole spirit world and Joanne's aptly named Dead Zone. Overall, THUNDERBIRD FALLS is a powerful addition to the series and well worth reading. This reviewer looks forward to finding out where Coyote has gone and to seeing how C.E. Murphy further develops Joanne's interpersonal relationships with both Captain Morrision and Gary. COURTESY OF CK2S KWIPS AND KRITIQUES

Published by Thriftbooks.com User , 16 years ago
Though she possesses supernatural powers, Joanne Walker ignores them even when they would make life easier. The Seattle police officer wants to live a normal life and be the best cop on the force; besides her superior Captain Morrison is watching her since the URBAN SHAMAN saving the world incident. Thus she rarely employs magic fearing Morrison will fire her. However, Joanne's shunning of her shaman skills is put to the test when she finds a corpse at the university showers. The victim belongs to a coven whose associates turn to her for help. They insist that the eternal war between good and evil has taken a critical turn with the enemy becoming the more powerful and their only hope rests with an ancient demi-god Virissong coming to earth to join the forces of good to tip the balcony back. To succeed in expediting his return, the coven needs Joanne's help. She wonders if she should trust them as placing the fate of humanity on a being from beyond could tip the balance to the wrong side. Either way Joanne knows she must learn to use her magical ability as demons arrive in Seattle, which implies Armageddon seems around the corner but her spirit and taxi guides are both out of commission. THUNDERBIRD FALLS is a terrific police procedural fantasy starring a delightful protagonist still struggling with the magical skills she inherited as defined by her birth name Siobhan Walkingstick vs. her legal name of Joanne Walker. The fast-paced story line moves out rather quickly from the moment Joanne finds the dead woman in a nearby shower and never slows down, though filled with doubts and hesitation, she knows she must act, but do what is the question. Readers will enjoy Joanne's walk through the Dead Zone in this gripping thriller. Harriet Klausner
Trustpilot
Copyright © 2022 Thriftbooks.com Terms of Use | Privacy Policy | Do Not Sell or Share My Personal Information | Accessibility Statement
ThriftBooks® and the ThriftBooks® logo are registered trademarks of Thrift Books Global, LLC