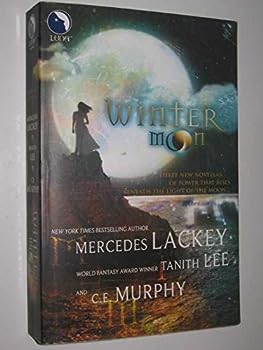 Winter Moon: With Moontide And The Heart Of The Moon And Banshee Cries (Luna S.)

Winter Moon by Mercedes Lackey\Tanith Lee\C.E. Murphy released on Oct 25, 2005 is available now for purchase. This description may be from another edition of this product.

Published by Thriftbooks.com User , 12 years ago
This author has a very creative mind, I thoroughly enjoyed the book and highly recommend it.

They're all really good.

Published by Thriftbooks.com User , 14 years ago
Moontide - Author: Mercedes Lackey This novella, Moontide, is set in the world of the Five Hundred Kingdoms, from the books The Fairy Godmother: A Tale of the Five Hundred Kingdoms (Book 1) and One Good Knight (Tales of the Five Hundred Kingdoms, Book 2),but does not involve Tradition and stand alone. Moira na Ferson, was sent away by her father at a young age to foster with the King's sister, Countess Vrenable. The intent was that she be taught to be a proper lady and learn the running of a keep, but Countess Vrenable teaches a select few of her charges so much more. The countess is in charge of the Grey Ladies, a group of young ladies who are trained to be everything a lady should be, but are also trained as spies and assassins. Moira has been invited to become a Grey Lady, but before she can complete her training, her father calls her back home, where Moira suspects he intends to marry her off. Before Moira leaves Viridian Manor the countess informs her that her father is suspected of treason. Moira, having had no real love for her father, readily agrees to be Countess Vrenable's eyes and ears. Once she returns to Highclere, she begins to see how right the countess' suspicions are. Her father seems to be planning to marry her off to an enemy prince and they make many sly comments about ships sinking in the storms that frequent Highclere. Here father's new Fool seems very interested in all the goings on, but is he a spy for the King or is he working for her father and the prince? Could trusting him see her married to the prince and imprisoned in his harem or will it lead to salvation? For some reason, of all the characters in this story, the Fool was my favorite. I would have liked to have seen some of the story from his point of view. We were told about his wit, but never got a chance to see it. I liked how Moira handles her role as a spy and the whole confrontation with the prince. It's a lot more realistic than having her be blasé about it, as if it's something she does all the time. And really, no matter how much you train or prepare for a situation, you aren't truly ready for the reality of it until it's there in your face. The Heart of The Moon - Author: Tanith Lee Clirando is a warrior woman, strong and honorable, who's happy with her life. And why not? She's leader of a band of warriors, of which her best friend from childhood, Araitha, is one and she's got an attractive lover, Thestus. Things couldn't be better! That is, until the night lighting strikes the Temple of the Maiden and, in the scramble to save the roof, she discovers that Araitha and Thestus are having an affair. She challenges them both in battle and wins. They are both shamed and must leave the town of Amnos, but before her ship sails Araitha visits Clirando for a parting shot. She curses Clirando to be filled with emptiness, to find joy in nothing and to sleeplessness, that she may find no rest. Clirando shrugs off the curse and goes on with her life. Until she he

Published by Thriftbooks.com User , 16 years ago
It's hard to really 'rate' a grouping like this, where I had divergent reactions to the three works. The Lackey novella I found to be boring and obvious. Yet another plucky young girl who, through the power of feminism, can walk circles around the rest of her society, solving a barely transparent plot against the kingdom. I suppose fans of hers will like it well enough, as it's fairly typical of her work. I'd been meaning to read some Tannith Lee for some time, and I can see the appeal. I liked her writing style, and the character-centric story. It was okay, even enjoyable, but fairly forgettable. But I loved the C.E. Murphy story. She's got such a strong and clear voice. This ties directly into last year's "Urban Shaman" novel, and is a nice continuation of the story. I'd recommend reading that instead, but if you do and you want more, this is a large enough chunk to make it worth the trouble. Ultimately, I hope that this causes fans of the more popular Lee and Lackey to discover this exciting new author.

Published by Thriftbooks.com User , 16 years ago
I picked this anthology up due to the inclusion of C.E. Murphy- and I was not disappointed! Murphy's tale, "Banshee Cries", continues the saga of Joanne Walker, the central figure in "Urban Shaman". In "Urban Shaman", Joanne was a police mechanic for the Seattle Police Department until the department replaced her while she was in Ireland with her dying mother. Consequently, she became an unwilling police officer who also has a spirit guide, Coyote. In this story, Joanne communicates with her dead mother, Sheila MacNamarra, to thwart a serial killer who had also tried to kill her mother. "Moontide" by Mercedes Lackey was an unexpected surprise for me. Moira na Ferson has been trained to be one of the Grey ladies- able to appropriately interact at court and yet have the skills of an assassin. Her father sent her away many years ago and has shown no interest in her until he mysteriously demands she return home. Once home at the Highclere Sea-Keep, she discovers her father, Lord Ferson, has befriended the pirate, Massid, Prince of Jendara. I won't spoil this intriguing story by revealing the nefarious plot Moira and Kedric the Fool uncover and ultimately thwart. "The Heart of the Moon" by Tanith Lee was the weakest of the three stories and a disappointment to me as I had previously read and enjoyed some of Lee's work. Clirando, a warrior for the goddess Parna, discovers her lover, Thestus, and her sister-friend, Araitha, have betrayed her by having sex. She challenges and beats both in duels and both are banished. Before Araitha leaves for her banishment, she curses Clirando. Clirando then receives word that Araitha died in a shipwreck, thus cementing the power of the curse. Clirando and a band of her warriors are then sent to the Moon Isle, a mysterious Isle where selected individuals were sent for the Seven Nights. From there, the story is a series of hallucinations/dreams where Clirando meets her true love, Zemetrios, and both earn their redemption. Perhaps others will enjoy the underlying meaning behind the story (such as the pigs representing Clirando's evil faces) but I felt it was too confusing. Overall, I recommend this anthology based on the strength of the stories by Murphy and Lackey.

Published by Thriftbooks.com User , 16 years ago
"Moontide" by Mercedes Lackey. At Sea Keep Moira na Ferson must choose between what her father wants of her and what her king demands of her, but she has always been independent and strong. Whichever sire she obeys will cause harm especially to her so being independent and strong and strictly adhering to the laws of marriage as they pertain to her, Moira heeds the advice of the Fool. "Heart of the Moon" by Tanith Lee. Warrior priestess Clirando once sought love, but instead received pain and a curse. She wears a mask to hide her inner hurt until she meets Zemetrios. As she begins to feel love again, she expects him to betray her as the curse will surely intercede unless he can get her to join him in questioning what they hold to be true, the greater truth of love. "Banshee's Cry" by. C E Murphy. Joanne Walker has vowed to never use her powers as a shaman, but soon has no choice but to rely on her "gift" for the good of her people. She must solve ritual homicides that have occurred under the full moon and can only do so by using that which she detests employing. These three romantic fantasies are well written tales of love between strong protagonists with the powerful females having the more obvious flaws; in fact the men seem underdeveloped in comparison. Still sub-genre fans will enjoy each novella that has a different spin making for a fine anthology. Harriet Klausner
Trustpilot
Copyright © 2022 Thriftbooks.com Terms of Use | Privacy Policy | Do Not Sell My Personal Information | Accessibility Statement
ThriftBooks® and the ThriftBooks® logo are registered trademarks of Thrift Books Global, LLC