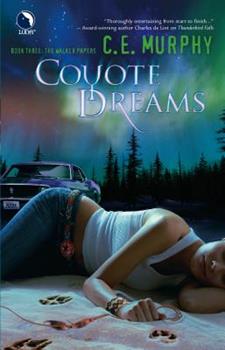 (Book #3 in the Walker Papers Series)

Much of the city can't wake up. And more are dozing off each day. Instead of powerful forces storming Seattle, a more insidious invasion is happening. Most of Joanne Walker's fellow cops are down with the blue flu--or rather the blue sleep. Yet there's no physical cause anyone can point to--and it keeps spreading. It has to be magical, Joanne figures. But what's up with the crazy dreams that hit her every time she closes her eyes? Are they being sent...

Published by Thriftbooks.com User , 15 years ago
The worst part of reading this book is getting to the end and finding out how long we have to wait for the next one (luckily, Murphy has a new trilogy starting soon!). First person narratives are not always my favorites, but books like these are immediate exceptions. Joanne is such a flawed yet noble heroine, striving to do the right thing even if it goes against everything she has previously believed. My only complaint is that Joanne and Morrison come sooooo close, but not far enough. It just makes me want the next book more.

This series gets better and better

Published by Thriftbooks.com User , 15 years ago
This series gets better and better. A mysterious sleeping sickness is effecting the Seattle police precint. But to help her friends and co-workers, Joanne Walker must confront her own weaknesses and vulnerabilities. The story ends with a punch to the gut....Yet I still want more. Joanne Walker is a great character and I love rooting for her.

We Have A Winner!

Published by Thriftbooks.com User , 15 years ago
I just finished it and my heart is still beating fast. This is a great addition to a really good series. If you haven't read the other books, you should. Although this can be read as a stand alone, the experience is much richer if you know what came before. I'm not one to rehash the story and possibly put out spoilers so I'll stick to the writing. The story is very well written. The characters are so realistic you could meet them on the street and care about what happens to them from the get go. I was completely pulled in on page one and was sorry to reach the end. Worth every penny spent on the purchase price. I can't wait for the next one. A definate keeper!

Published by Thriftbooks.com User , 15 years ago
The third novel (one novella) in the Urban Shaman Series, is just as good as the previous. A little more mysticism in this one, but the character had to work out some internal strife, which she has and we can move on. It resolved issues left hanging from the previous book like her acceptance of her shamanism, the disappearance of Coyote and what about Morrison. Its also sets up a strong base for the next books, that I'm looking forward to.Through all that it's a good story about the "Blue Flu," people falling asleep and not awakening, which Joanne has to figure out without falling asleep herself. Altogether a great book.

Joanne and weird go together like pizza and beer....

Published by Thriftbooks.com User , 15 years ago
At least that's what one of her fellow Seattle police officers told her. Joanne Walker, aka Siobbhan Walkingstick, can't help but agree. It's definitely getting weird when 1/4 of the police department doesn't show up for work. The officers have just gone to sleep and cannot be awakened. Physicians believe they are in a coma. Using her shamanic powers, Joanne realizes the sleepers are being slowly drained of their life forces by some vampiric type of magic. As her investigation progresses, she realizes she's the source of the problem. She's got to move fast to save her friends and fellow officers--and eventually, the world. C. E. Murphy has definitely hit her stride in this book. While every one of the Walker Papers novels so far has been very good, "Coyote Dreams" shows a maturity in her voice. Murphy has a wry, humorous take on life and it often shows, lightening the darker moments depicted in her novel, sparking a bit of life and hopefullness into a sometimes bleak magic-blighted world. The first 20 plus pages are some of the funniest I have ever read and well worth the occasional re-read when there's time. "Coyote Dreams" develops Joanne's character far more than the previous novels. This story is very much Joanne's personal 'hero journey' into acceptance of her shamanic powers as well as solving the magical problem. Much of the story occurs in visions interacting with mythical creatures such as the raven, the coyote, and other American Indian legends. The plot is well done. If you're not paying attention, you may miss the point where Joanne slips into visions and dreams--I did twice and had to re-read, but I think that is more due to the fact that I started at 10:00 PM and just finished at 5:00 AM. Yes, the story was that compelling and I almost wish I had the willpower to only read it 5 pps at a time like the character in "Succubus Blues" so I could savor the experience more. (Trust me, that really would NOT work with the first chapter or so--I don't know anyone who could do that!) Murphy's world is definitely well realized and researched. Her depiction of Celtic and Native American legends are captivating especially in the melting pot--as so many real people have intermixed and joined cultures in their own families. Another positive about Murphy's writing is that her books stand alone. You don't have to wait a year to find out whether Joanne solves the current problem. Of course, there are threads that will continue throughout the series, such as Joanne's relationship to Captain Morrison and her friend, Gary, her septuagenarian cabdriver and mentor. While you do not have to read the first two books, "Urban Shaman" and "Thunderbird Falls", you'd be missing out if you didn't. The whole series is very much worth reading.
Trustpilot
Copyright © 2022 Thriftbooks.com Terms of Use | Privacy Policy | Do Not Sell or Share My Personal Information | Accessibility Statement
ThriftBooks® and the ThriftBooks® logo are registered trademarks of Thrift Books Global, LLC