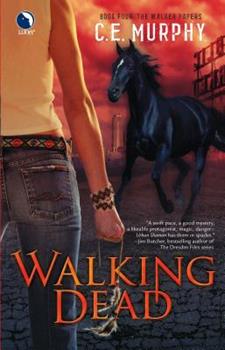 (Book #4 in the Walker Papers Series)

For once, Joanne Walker's not out to save the world. She's come to terms with the host of shamanic powers she's been given, her job as a police detective has been relatively calm, and she's got a love life for the first time in memory. Not bad for a woman who started out the year mostly dead. But it's Halloween, and the undead have just crashed Joanne's party. Now, with her mentor Coyote still missing, she has to figure out how to break the spell...

Add this one to your Urban Fantasy Must Read List

Published by Thriftbooks.com User , 12 years ago
Don't let the Publishers Weekly review put you off -- "The plot doesn't so much thicken as sag from too many tricky twists and a mishmash of mythology, including Celtic and Native American lore, witchcraft, stage magic, clairvoyance and gods, but at least Joanne remains an appealing protagonist. (Sept.)" C.E. Murphy does a great job mixing her magics and building a story worth reading. The characters are well fleshed out, interesting and caring of one another.

Published by Thriftbooks.com User , 13 years ago
I love this series and it was a long wait for this book, but well worth it. Joanne is back and kicking it.I love it that the books are written in 1st person because you feel everything along with Joanne. She is such a complex character, strong yet vulnerable, independent yet dependent, open yet closed. The greatest thing about these books is that you can witness Joanne growing as a person, she has changed so much since the first novel and i can't wait to see her grow even more into a person she can like. These books are not your standard easy-to-read urban fantasy, they have real depth and that is why i highly recommend you pick them up and give them a go.

Well Worth the Wait!

Published by Thriftbooks.com User , 13 years ago
I am a huge fan of this series; of all three she writes this is by far my favorite. I've waited like everyone else for this latest installment and it was well worth the wait! I like the fact that Joanne grows with each book: not making the same mistake twice, actually taking an active roll in educating herself and developing her skills for her lot in life. Not to mention accepting (albeit slowly) something she knows separates her from most of the world even more so than her upbringing. The relationships of Joanne and her motley crew are fantastic and fully fleshed out. These are people you want to see every day and hang out with. I love that the relationship between Joanne and Morrison is slowly taking shape and not predictable. Who knows what will happen with those two...I hope something satisfying. I would (and do) highly recommend this series to everyone no matter the age group. If you like sci-fi/urban fantasy you're sure to love this. Read them in order or you'll be lost to the references made to earlier stories and won't understand Joanne's frame of mind or perspective of the world. Start with Urban Shaman, then Thunderbird Falls, then the short story in the anthology Winter Moon, then Coyote Dreams, [...] Now I just have to find other entertainment until the next one "Demon Hunt" comes out in June 2010...ho hum...

Published by Thriftbooks.com User , 13 years ago
Yet another series I CANNOT get enough of. "Walking Dead" is C.E. Murphy's latest in her 'Walker Paper' series about Joanne Walker, shamaness/auto mechanic/cop. Now if that combination doesn't make you want to read this series, I don't know what would! It's been a chaotic year for Joanne. Her otherworld mentor, Coyote, died in the last book. But as in real life, major events presage major life changes and Joanne has finally (well, mostly) come to terms with all the weirdness that goes with being who she is. She's even spending time learning and practicing. And that's a good thing when her Halloween party is crashed by a few ghosts looking for a body. Then she and her police partner are called to investigate a robbery/murder at the local museum. You would assume the murder part would be the worst...but that would only be true if the robbery didn't involve a relic called Matholwch's Cauldron. So now Joanne has to figure out how to find and destroy a relic while dealing with: the two love interests in her life, an insurance adjustor who's being nosy about Petite, zombies in graveyards, the Wild Hunt, and a teenager who's had a sure vision of Joanne's death! What's a shamaness to do? I enjoy this series so much. Joanne is NOT your typical heroine. She's almost six feet tall, more into muscle cars than muscle men, and is often resentful of what her birthright has given her. I guess that makes her the 'reluctant heroine' instead of the 'reluctant hero'. Yet her complaints fall just short of 'whine' territory and the combination of mystery, action, and magic is perfectly suited to my tastes. On a more serious note, this series has much less typical 'romance' and I would rate it PG which means I don't have any problems letting my sons read it...and they love it too! Another keeper for my bulging shelves and another long wait for the next chapter in Joanne's life.

Published by Thriftbooks.com User , 13 years ago
I am a huge fan of this series and I have been waiting forever for this installment! For those of you new to this series- this is book 4. You must read the series in sequence inorder to understand the events: Urban Shaman (The Walker Papers) Thunderbird Falls (The Walker Papers) Short story "Banshee cries" in Winter Moon: MoontideThe Heart of the MoonBanshee Cries Coyote Dreams (The Walker Papers) Joanne is back, and better than ever. Yet again with the help of her partner Billy Holliday, she has to save Seattle from another paranormal crisis. All my favorite charcters from the previous books are back as well. I love Joanne, because unlike the usual UF heroine, she is vulnerable and insecure yet strong when it comes to guarding those she loves. My only complaint: Please Ms.Murphy can we have a little more development on the relationship between Joanne and Morrison! I am dying to see the two of them get together. He has so little face time in this book. Their relationship is one of the main reasons I keep reading this series. Please throw this devoted reader a bone and give me more Morrison and more romance between these two. I can't wait for the next book in this series: "Demon Hunts" which comes out June 2010.
Trustpilot
Copyright © 2022 Thriftbooks.com Terms of Use | Privacy Policy | Do Not Sell or Share My Personal Information | Accessibility Statement
ThriftBooks® and the ThriftBooks® logo are registered trademarks of Thrift Books Global, LLC