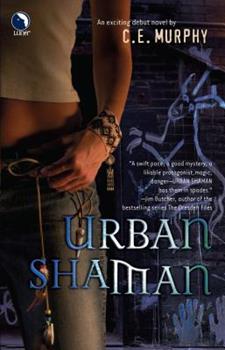 (Book #1 in the Walker Papers Series)

Urban Shaman by C.E. Murphy released on May 31, 2005 is available now for purchase.

Published by Donna , 3 months ago
Boring!

I thought it was a little slow.

Published by Thriftbooks.com User , 15 years ago
The beginning of the book started off with a plot hook, but took the time to provide enough background to understand the character. More character development took place as the story progressed in reasonable "bites" so I wasn't wading through a lot of back story at any particular time. The action happened in good sized chunks. I also liked the way Shamanism was portrayed. While I admit that I don't know much about Shamanism, what I do know meshed with how it was portrayed in the book. I like realistic adaptations of Magic in novels.

Published by Thriftbooks.com User , 16 years ago
For those of you readers who are interested in finding something new and different in the paranormal genre, then I absolutely recommend you grab this book and fast. I was lucky enough to have grabbed the last copy. I am one of those readers who are picky about my books and even still new writers, but I've gotten into the habbit here lately of thinking outside the box. I'm glad I did with C.E Murphy. Urban Shaman took me on the most wonderful journey, one that I have not had in such a long time. Not since I started reading Charline Harris's books have I come across a female chracter so compelling. I couldn't put this book down! Urban Shaman's leading lady, Joanne Walker (born Siobhan Walkingstick) has captured my heart forever. There's so much I loved about this character, especially her sense of humor. There were moments I couldn't stop laughing. (A big plus in my book) Thank you Madame Murphy for this character! Since I have a love of Celtic Mythology besides Greek Mythology, I felt the blending of Celtic and Native American lore was simply brilliant! Here's the 411. Joanne is a mechanic yet she works for the Seattle Police Department. She's been on personal leave of abscence to tend to her dying mother. For four months she stays in Ireland and on her way home, she spots a woman in trouble from the airplane. From that moment, everything in Joanne's life changes in a huge way. Her path crosses with a cabbie by the name of Gary. (He reminds you of that smart alec uncle you can't help but love, but he's big as a bear and has a smart mouth.) When she finds the woman she sees from the plane and helps her, Joanne is suddenly plunged into the ancient Celtic world and runs across an old Celtic god by the name of Cerunnos who leads the Wild Hunt. Sparks fly between these two! Besides the fact that he tries to kill her in the beginning, towards the end he gives her this kiss that makes you wonder what Murphy has in store for these two. If not him, then certainly her boss, Morrison, for even though he growls at her you can tell he cares about her. There's also the curious incident when she finally meets her spirit guide, Coyote, who in Native American lore was also known as the Trickster, much like Loki in Viking Lore. Coyote helps Joanne to realize that the power inside her has been there all along. It takes her nearly dying for her to truly realize that fact, and for her to face the fact that she is anything but normal. Never have been, never will be. For those of you who don't know what the Wild Hunt is, I'll tell you. Many culturs have a name for it, but many believe it is a phantasimal cluster of dead horsemen and huntsmen, riding on beastly horses with savage wolves and ravens riding among their ghostly throng. They represent the untamed, dark and wild spirit that is nature, things that man will never understand. Seeing the Wild Hunt was considered to be a bad omen, a sign that the seer was going to die or another's impending doom. It is said that

Published by Thriftbooks.com User , 17 years ago
Joanne Walker, born Siobban Walkingstick, is returning to Seattle from her Mother's funeral in Ireland. On the plane home, as pilots are making a final pass into the city, she sees a woman being attacked at a church. Everyone thinks she's crazy. Heck, even she thinks she's crazy, but she's compelled to help this woman. So, she hires a cab and sets out to find trouble in the bad side of town.... That opens the story of Joanne Walker, mechanic-cop for the Seattle PD. In "Urban Shaman" Joanne must quickly learn to accept and adapt to the new powers she has--because lives depend on her. "Urban Shaman" is a quick read and a good one. I strongly recommend you get into this series. Trust me, if you enjoy Kim Harrison, Jim Butcher and other novels of this type, you will be catching up when the others come out!

Published by Thriftbooks.com User , 17 years ago
This book is worth your time. The main character is imminently competent and likeable, with a very strong voice. One of the strongest and well written protagonists I've seen in a while. The story is also good - solid Urban Fantasy. And solid fun from cover to cover - this one is a page-turner. I recommend starting it on a Friday night when you don't have any big weekend plans! Don't be turned away by thinking this is Luna, so a romance with fantasy trappings. It's not. Belongs on a bookshelf next to Emma Bull's _War For the Oaks_ and Terry Windling's _Borderlands_ anthologies.

Published by Thriftbooks.com User , 17 years ago
Urban Shaman was an extremely fun, and funny, read. The pacing was quick and kept me thouroughly engaged throughout the book. The first-person narration style helped to draw me in to the life of the extremely quirky and engaging main character as she struggled to redefine her life (while, in the meantime, fighting off various figures from Celtic mythology). Urban Shaman made me laugh out loud multiple times and had me chuckling regularly enough that the person on the next treadmill over at the gym asked me what was so funny. It's a fun, fast read with an engaging main character, well-developed supporting cast, and a plot that keeps you guessing, sprinkled through with a lot of humor. I heartily recommend it.
Trustpilot
Copyright © 2022 Thriftbooks.com Terms of Use | Privacy Policy | Do Not Sell or Share My Personal Information | Accessibility Statement
ThriftBooks® and the ThriftBooks® logo are registered trademarks of Thrift Books Global, LLC