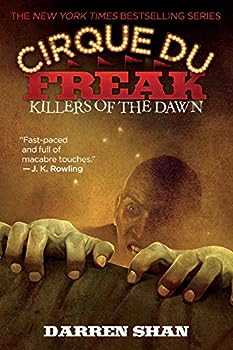 This description may be from another edition of this product. Outnumbered, outsmarted and desperate, the hunters are on the run, pursued by the vampaneze, the police, and an angry mob. With their enemies clamoring for blood, the vampires prepare for a deadly...

Is It The End?

Published by Thriftbooks.com User , 15 years ago
Darren Shan is a half vampire and is a vampire prince, the highest spot of the vampires. Mr. Crepsley, Vancha March, and Darren Shan have to hunt and kill the vampanzes lord. If they kill him they will win the War of the Scars. It starts out a Mr. Crepsley, Vancha, and Darren running away from the vampanze with Steve Lenorad, a vampanze. Darren and the two other vampires don't know that this was a trap. Whenever they get to their apartment, the police were there, and they escaped. The vampanze bocked the sewage tunnels so they had to hurry up and get out of own. Later that night, they went into the tunnels and tried to find their lord to kill him. Along the way they encounter traps and than find the lord of the vampanze. You will have to read the book to find out what happens next. I really liked this book because the author always fools you and there is a lot of action in the books. I would recommend this book whoever likes action, mysteries, and vampires. This is the ninth book in the sequel.

Creatures of the Night

Published by Thriftbooks.com User , 16 years ago
The ninth book in the Cirque Du Freak series, Killers of the Dawn, will leave readers begging for more. Darren Shan the Vampire Prince, Mr. Crepsley, and Vancha are on a quest to find and kill the Vampaneze Lord. After a devastating twist of fate Darren Shan is public enemy number one! The vampaneze leading them into a battle that the odds are clearly in the vampaneze favor the three hunters stand up to the challenge. They break all to puzzles and roadblocks that the vampaneze can throw at them and find the Vampaneze Lord at last. Many hardships lie in the tunnel as sacrifices are made and the fighting continues in the War of Scars. Books full of twists as characters come back into the books, some to help and some for revenge. For the most part I really liked this book. It was full of twist that I never saw coming. It had great detail and plenty of action to keep me reading. In some books the farther they go in the series the worst they get, even in the ninth book Darren Shan still finds a way to keep you tied to the books. Some things in the book were disappointing like how the book ended. It stopped all of a sudden in the middle of everything. Some of the parts in the book didn't make sense to the book. Some parts seemed to be just thrown in there to make the book longer. Anybody who wants to escape reality into a book full of creatures of the night and full of action would love this book. Anyone who has ever read Buffy or Angel would enjoy this thriller.

Published by Thriftbooks.com User , 16 years ago
Darren Shan has added to his masterpiece series with the 9th book, Killers of the Dawn. As always, these gems are far too short!! Shan is such an excellent writer he keeps you wanting more at the end of each book. In this book, young Darren and company, the Hunters, meet up with the Vampaneze Lord in his lair for an all out fight! A few hair-raising moments, some unexpected turns, and an intriguing plot add to this great storyline. A must read for anyone who loves vampires, humor, and and unique writing of Darren Shan!

Published by Thriftbooks.com User , 16 years ago
Have you ever been in a life of death situation where your only objective is to hunt down and eliminate one particular killer- and your one destined alternative is to eventually die? Probably not. But this is just what young Darren Shan, a half-vampire and Vampire Prince, and his three trusted allies- Vancha March, another prince, Harkat Mulds, a little person brought back to life by the magical Desmond Tiny, and Mr. Crepsley, a former Vampire General- are faced with. They have four destined chances to kill their primary target- the Vampaneze Lord. Vampaneze are vampire blood-brothers who broke away from the clan to start their own because they did not like their type of ruling. These two races of night-stalkers have been at war for many years now- "The Three Hunters" already short two failed chances kill the Vampaneze Lord. The third chance, they made a horrible end of him. At least, that's what they thought.... Killers of the Dawn is the ninth book of the seemingly never-ending Cirque Du Freak series, which I've started from the very first book, and loved all of the others. Darren Shan writes with a very unique style of writing- one in which a plot so serious it still has a little added humor to keep the reader entertained. (Hey, it worked on me...) And each book has at least some blood and killing. Killers of the Dawn ranks highest. I would strongly recommend this whole entire series to anyone. Boy or girl, these stories are incredible.

Strong and enjoyable continuation of the Vampire War trilogy

Published by Thriftbooks.com User , 16 years ago
The Vampaneze Lord still eludes Darren Shan, Vancha March, and Larten Crepsley. They know he has followers and minions, people who can't kill them but can seriously cripple their chances of killing the Vampaneze Lord and saving the fates of vampires worldwide. Darren, Vancha, and Larten have taken Steve Leopard, Darren's former friend, hostage, but Steve always seems to be one step ahead of them. Accused of murder, the three hunters are accosted by law enforcement and forced to split up. Hostages are traded and Vancha finds an unusual if welcome ally in the local police chief. Following Steve Leopard's lead, the hunters find the underground lair of the Vampaneze Lord. But when the Vampaneze Lord's identity is revealed, Darren, Vancha, and Larten realize that the War of the Scars has a long way to go before the end. KILLER OF THE DAWN is the third in the Vampire War trilogy, setting up the final three books in the saga of Darren Shan. Current fans will enjoy the resolutions in this book, but those new to Shan's world of vampires are better off starting at the beginning of the series. Shan's trademark rollercoaster ride of blood and guts is as strong as ever, and Darren experiences another loss of someone close to him, sealing his fate as the hunter of the Vampaneze Lord.    --- Reviewed by Carlie Webber
Copyright © 2020 Thriftbooks.com Terms of Use | Privacy Policy | Do Not Sell My Personal Information | Accessibility Statement
ThriftBooks® and the ThriftBooks® logo are registered trademarks of Thrift Books Global, LLC