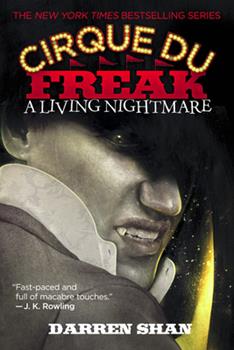 From the Master of Horror comes the first gripping book in the twelve book New York Times bestselling Saga of Darren Shan. Start the tale from the beginning in the book that inspired the feature film The Vampire's Assistant and petrified devoted fans worldwide. A young boy named Darren Shan and his best friend, Steve, get tickets to the Cirque Du Freak, a wonderfully gothic freak show featuring weird, frightening half human/half animals who interact...

20 Years Ago; The Beginning

Published by Derek Hayes , 3 months ago
This book started one of my favorite series of all time. I really felt as if I was experiencing the events with Darren. Darren's life is wild and full of heart-racing adventures. His story had to start somewhere right? Pick this amazing story up and enjoy the gripping, page turning tale of a young boy and his....(find out and buy the book)! Highly recommended 10/10.

Published by A.M. , 10 months ago
I loved these books as a kid and the story is just as creepy and intriguing as I remember!

Can’t believe I read this in 3rd grade

Published by Sabu , 2 years ago
I’m reading it again as a 24yr old as I remembered I loved the series as a kid. Wow it’s dark, it’s sad, it’s spooky and gore. Vocabulary isn’t spectacular as an adult book would be but isn’t dumbed down and silly. If you find yourself liking the first 50pgs go ahead and order the whole setup of 12 more! It’s wonderful.

Published by Thriftbooks.com User , 5 years ago
It has been, and seems it always will be, one of my favourite books and series as a whole. The way this first book is written, as if a prologue to the rest but still just as important as the last in the series leaves the reader captivated. Young Darren is an interesting character in that he follows little to no tropes that are usually associated with vampire books. He is both humourus and yet presents the story in a way that send chills down your spine.

Published by Thriftbooks.com User , 17 years ago
The author wasn't kidding when he told us that this was going to be a story that didn't follow typical conventions. It was a wonderfully told story, with action that pushed the story forward from chapter to chapter. He used the device of short chapters, sometimes when they weren't necessary, to fuel that action. If writers write in long chapters, especially in books meant for children, their interest is lost, because they find themselves meandering. But when the chapters break, that implies (almost without the reader being aware of it) breakneck action. I'd love to discuss the surprise ending, as it was something I was NOT expecting whatsoever. But to do so ruins the surprise ending. I hope reviewers here haven't done that. And some of the things that made that ending possible were truly gruesome. This was a terrific story. It's the second book I've read where I've begun in bed and stayed awake until finishing it (about an hour and a half). I'm really looking forward to reading more, and was glad to see that there is much more enjoyment ahead.

Would you say yes?

Published by Thriftbooks.com User , 20 years ago
This book is an awesome book! I ask all people I know to read this book. And I suggest you should too.Darren was a normal boy. His life was changed by a circus flyer. He and his best friend Steve went to the freak circus. They found out one of the performers was a vampire. That vampire had a performing spider. Darren stole her. Steve was bitten by her. She was a poisonous spider. No one knew how to cure him except one. Darren goes back to the vampire and asks him to cure Steve. But he said that Darren has to pay. Not money, not jewelry, nor gold. Half of his life. Read this book and face this dilemma. Would you say yes, if your best friend was about to die and you knew the only way to save his/her life which is to throw half of your life away?

Published by Thriftbooks.com User , 21 years ago
Cirque du Freak by Darren ShanWhile this first novel for young readers is slightly marred by some careless editing (the folks at Little Brown should know much better!), it reveals great promise for a superb edition to the juvenile horror genre. Author Shan finely delineates several appallingly fascinating characters including the eponymic protagonist, but as ever in this sort of literature, the plot reigns. Intricate as the spider's webs which permeate the text, the reader turns the pages and wishes only to devour more at story's end. There have been comparisons to R. L. Stine's teeny terror tales, but Shan is a better writer and probably full of plots and characters that haven't been recycled for the umteenth hundred time. There are resonances of the vampire fiction of Anne Rice and Chelsea Yarbro with the merest soupcon of J. K. Rowling's wizardly romps as well. Some reviews aim the book at the 9-12 audience, but this old children's librarian would expect it to be a bit too intense for the former, and yet would captivate many an adult admirer of the genre.

Published by Thriftbooks.com User , 21 years ago
Cirque Du Freak is a book about a boy and his friend that go to see an illegal freak show. The freak show changes their lives forever and so many amazing things happen as a result of them going to the freak show. It is amazing how brilliant the author had to be in order to write this book because it is one of the best books that I have ever read and I usually don't even like horror stories. For those of you who aren't sure of whether you want to read Cirque Du Freak or not, I highly reccomend that you do.

A Few Words From The Author ...

Published by Thriftbooks.com User , 21 years ago
We're at the start of something big ... something dangerous ... something deadly. The Saga Of Darren Shan is going to take us places we've never been before, places of darkness and terror and doom. It's going to introduce us to many strange and fascinating characters, some of whom are true and helpful, some of whom are deceitful and murderous. The difficulty will be telling them apart, because in the darkness it's hard to spot the difference between good and evil. The world of Darren Shan is a harsh world, a testing world, a cruel world. It's a place of poisonous spiders, savage wolf-men, insane killers; a domain of magical, powerful beings, of freak shows, of underworld tunnels and organisations. It's a world where death stalks silently by the sides of every character - reaching out to snatch them whenever it chooses, in the blink of an eye, the beat of a heart, the baring of a set of teeth. CIRQUE DU FREAK is the start of the adventure. In it, an ordinary boy called Darren Shan steps through a doorway into a world of nightmares. I hope you step through with him - he's going to need the support of loyal and honest friends in the lonely years ahead. We're at the start of something big ... the path in front of us is long and bloody ... I don't know if we're ever going to make it back ...
Trustpilot
Copyright © 2022 Thriftbooks.com Terms of Use | Privacy Policy | Do Not Sell or Share My Personal Information | Accessibility Statement
ThriftBooks® and the ThriftBooks® logo are registered trademarks of Thrift Books Global, LLC