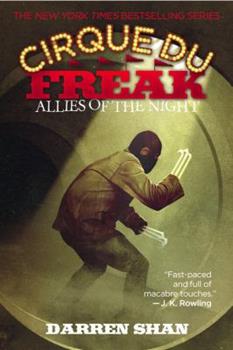 Darren Shan, Vampire Prince and "vampaneze" killer, faces his worst nightmare yet--school. But homework is the least of Darren's problems. Bodies are piling up. Time is running out. And the past is catching up with the hunters fast.

Published by Thriftbooks.com User , 14 years ago
I love this book because I love reading about vampirers.Darren Shan is a thirteen year old boy even though he doesn't look thirteen he is the reason why he doesn't look his thirteen is because he is half vampire it doesn't let look like he is his age because he is growing slower than the normal humen would.

Published by Thriftbooks.com User , 16 years ago
This book is awesome just like all the others in the sega, I'm not much of a reader and i just cant get enough of these book.

Darren Goes Back to School

Published by Thriftbooks.com User , 16 years ago
Darren Shan writes another great book in the series of wonderfully interesting Cirque Du Freak books. Allies of the Night satisfies fans of the series, yet once again leaves the reader wanting more, more, more. Shan presents his young protagonist with another twist. Darren and Mr. Crepsley go back to Mr. Crepsley's hometown, and Darren has to go to school. There are lots of fishy circumstances that require the vampaneze hunter to go to school, and he runs into too many familiar faces, but that is all part of the genius of Darren Shan. For those who claim the author is without skill, I say Charna's guts! You just don't get it. This series continues to be all readers can think about until. . . the next installment--Killers of the Dawn I read all 12 books in this series and actually ordered the last 4 from England because I couldn't wait to see what would happen next. Shan's unique perspective on vampires makes this series fun for those who like vampire stories and those who do not. Shan is truly talented.

Published by Thriftbooks.com User , 17 years ago
Its a very good book, but they take so long to come out!!! In europe, they have one threw twelve!! and twelve is the last one! SO if you want the boooks a LOT earlier, go to google or ask jeeves and type in darren shan, they'll give you LOADS of sights where you can get the versions!

Full of mystery, mayhem, and betrayal

Published by Thriftbooks.com User , 17 years ago
Forget the mad animals that want to trample Darren Shan. Forget fires and life as a Vampire Prince. In the latest installment of Darren's quest to find and kill the Lord of the Vampaneze, he has to face his most frightening challenge yet: algebra. Darren, Mr. Crepsley, and Harkat Mulds have returned to the city they first visited while hunting the mad vampaneze Murlough in TUNNELS OF BLOOD. They hunt vampaneze at night and sleep during the day --- until a school inspector visits Darren and tells him that if he doesn't enroll immediately at the Mahler School, the police will come after him! Just in case going to school wasn't unnerving enough, Darren encounters two very important people from his past. They join him in his hunt for the Lord of the Vampaneze, and with Vancha March --- an unconventional but fiercely loyal Vampire Prince --- their small army heads for the sewers to stop a series of human murders. In the course of their fight, Darren discovers that someone he thought was a friend is in league with the enemy, and he has to think fast --- and act faster --- in order to save himself and those who are helping to save the fate of the vampires. Mystery, mayhem and betrayal form the latest high-speed chapter in Darren Shan's vampire saga. Darren Shan isn't known for sparing the gory details, so for fans of a good thrill, this book is for you. Not recommended reading before bedtime!
Copyright © 2020 Thriftbooks.com Terms of Use | Privacy Policy | Do Not Sell My Personal Information | Accessibility Statement
ThriftBooks® and the ThriftBooks® logo are registered trademarks of Thrift Books Global, LLC