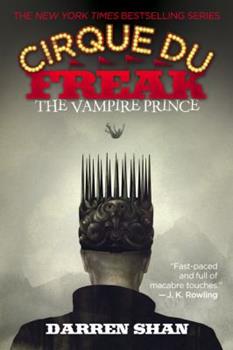 Branded a traitor, betrayed by a friend, and hunted by the vampire clan, Darren Shan, the Vampire's assistant, faces certain death. Can Darren reverse the odds and outwit a Vampire Prince?

Published by Elizha , 2 months ago
I bought this for my sister’s birthday. She loves Cirque Du Freak but she’s stuck with book one (because she doesn’t have the next book). Over all the condition of the book is more than great! I just hope that they wrap the books with bubble wrap or something (specially if we bought in a bulk) to protect the books instead of just putting it in bag. P.S you’ll see the same comment on all the books of this series haha

Published by Thriftbooks.com User , 16 years ago
This was an absolutely spectacular book, and as with the rest of the series, as soon as I finished it I wanted to read the next book immediately. Unfortunately, I couldn't find book seven (Hunters of the Dark) anywhere. All of the local bookstores had books one through eight, but nobody had book seven. I had to drive about 25 miles round to get book seven. However, Hunters of the Dark isn't the book being reviewed here. It's The Vampire Prince. As I indicated in earlier review regarding a book in this series, an author needs to hurt his character to create a sense of sympathy. You don't need to maim your character to achieve this. For example, Harry Potter was a sympathetic character (perhaps the most sympathetic character in all of children's literature, given the unparalleled sales of The Sorcerer's Stone) because he lived in a cupboard underneath the stairs and was denied the necessities of life, aside from food. The author is in excellent form, as he introduces new and entertaining characters, and his plots and twists (even though by now we've come to expect them) still surprise us. Also, Darren kills in this book - and the tenderness with which the author handles Darren's emotions is exceptional. For an author who has been chocking gore at us (though not gratuitously) for the past five books, this takes us back to the very first book which I still think is the best book in the series because of the conflicting emotions and stunning turn of events is the best book in the series. This is a very difficult book to review, for the subplots are so intricately woven that to comment on them would simply ruin the book. That's the problem with reviewing the Cirque Du Freak series. Commenting on events could ruin the book for other readers, and I certainly don't want any part of that. I will say that the ending surprised me, and I'm not sure how I feel about it, even having read books seven and eight. Still, it's an excellent and passionate book.

Published by Thriftbooks.com User , 17 years ago
This was one of the best books i've ever read[ until I read more of them which, I encourage you all to do.]and I am still excited because i'm on 6. I gave this book 5 stars and am still sticking to my decision. Darren Shan/o'saughsey makes you want to keep reading and find out what happens!!!!!!!!!!!! *****

My Idea of the Vampire Prince

Published by Thriftbooks.com User , 17 years ago
Hey! when i finished this book the first words that came out of my mouth were "wow." The first sentence of this book had me amazed by the book..."Be careful who you trust." This book was a fun filled white nuckle thrilling book. I loved it each step of the way. Darren was an ordinary boy until he met Mr. Crepsley who showed him into the world of vampires. Darren worked his way up to the vampire's assistant. In this edition of Darren Shan, Darren runs from his fears. Recently, Darren failed his trials and the suspence of that was death. He ran from this penalty and found that his own friend had betrayed him, killing his dear friend and ally Gavner Purl. Darren proves himself to the vampire princes and tells them about the stories he has witnessed they except his noblness and bravery. Read on to find how Darren works his way up to the top of the vampire counsil.

Published by Thriftbooks.com User , 17 years ago
If Harry Potter is your type of choice, surely, "Cirque De Freak: Saga of Darren Shan" wouldn't let you down. This matchless classic sequel arrives to the climax, "The Vampire Prince". Darren Shan, the author, has managed to demonstrate his talents and creativity into generating vivid images that led the readers into the presence of the story. This sequel flourishes with suspense, and the betrayal of friendship.Darren Shan was an everyday ordinary student until he met a vampire. The admiration of the vampire influenced and distorted his whole life. The minion of the night introduced him into the world of darkness, violence, and despair. Overwhelmed by the powers of the new world, he unconsciously harmed humans without noticing. He was then forever bounded and banished from the world of human beings. As Darren Shan gradually becomes accommodated with his new life, he meets several vampire friends. They fought together through trials of hardship. His new life seemed promising until one of his friends was assassinated. Surprising and heart wrecking, the assassination was through a betrayal of another friend. This is when everything started to crumble and odd events occurred."The Vampire Prince" is a part where events of previous sequels sum up and combines into the height of the book. This sequel commences with Darren Shan flowing in the river. Although struggling to survive, he insists in seeking his way back to the vampire mountain to report his momentous information that might threaten the life and death of the vampires. In the meantime, Kurda Smahlt, the betrayer of the vampires, is planning ahead on his next step in the upcoming ceremony. This book keeps pacing and solves mystery by mystery, like a spider web with events crossing one another bringing into the entire big picture view.How would Darren Shan be able to get back in time and end the insidious conspiracy of the betrayer? Read this thrilling sequel to find out! The ending of this story will not disappoint lovers for unexpected endings. If you are a blood thirsty shark preying in the ocean of books, this would be the one for you.

Published by Thriftbooks.com User , 18 years ago
All of the Cirque Du Freak books are awsome, they all have their strong points. The Vampires Assistent had the tear-jerking moments, Tunnels Of Blood had more gore, and the others had mixtures, this book has everything you could want. It's terribly sad and will have your feelings confused on a certain vamp. Characters die, and it has the gore of previous books. Yet again Mr. Shan leaves us craving more with an even better cliffhanger, you will be like "What the...." at the ending. Darrens courage and will to live is amazing, and this is definately a tear-jerker. This series is the best out there and it should be made into a movie. I highly recomend reading this series.
Copyright © 2020 Thriftbooks.com Terms of Use | Privacy Policy | Do Not Sell My Personal Information | Accessibility Statement
ThriftBooks® and the ThriftBooks® logo are registered trademarks of Thrift Books Global, LLC