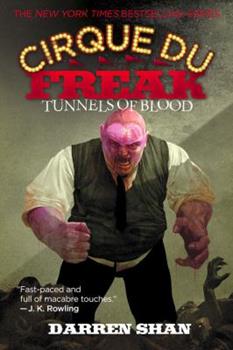 Darren, the vampire's assistant, gets a taste of the city when he leaves the Cirque Du Freak with Evra the snake-boy and Mr. Crepsley. When corpses are discovered--corpses drained of blood-- Darren and Evra are compelled to hunt down whatever foul creature is committing such horrendous acts. Meanwhile, beneath the streets, evil stalks Darren and Evra, and all clues point to Mr. Crepsley. Can they escape, or are they doomed to perish in the tunnels...

Published by Thriftbooks.com User , 2 years ago
I ordered a hardback copy and they sent me a paperback. I'm very disappointed that I didn't get what I ordered and the time it's taking to ship the books. Will not recommend this site to anyone.

A new element is added to the mix

Published by Thriftbooks.com User , 16 years ago
Once again, the author presents a unique and compelling story that surprises us, introduces us to new characters, and gives Darren - gasp! - a girlfriend. Mr. Crepsley has a mysterious meeting with one of the Vampire Generals, and just as mysteriously he leaves with Darren, allowing Darren's friend the snake boy (his name escapes me and the book isn't around) to accompany him. They all travel to a city where, once they arrive, Darren and the snake boy see on the news that people are dying, and that their bodies are being sucked dry of blood. Given Mr. Crepsley's odd silence and distant behavior, the boys conclude that Mr. Crepsley may be involved in the deaths. They decide to trail Mr. Crepsley when he leaves at night, to see where he is going and what he is doing. And they find out - and that's where the nightmare really begins. I won't discuss what actually happens, but I'll say this: you might think you know at least part of what's going on, but when you get the full explanation, you'll realize that you really didn't have a clue. The only thing that I find slightly annoying about this series is that Mr. Crepsley - a very well respected vampire - seems to make quite a few mistakes. Without these mistakes (withholding information, for one), there would be no story. I'd like to see that change.

Published by Thriftbooks.com User , 18 years ago
This book was so good I could not put it down. In the book Darren gets a girlfriend named Debbie and meets an evil vampire. Evar gets kidnaped by the vampire and Darren needs to risk his life and others to save a friend he needs most.

Yet another great book by Mr. Shan

Published by Thriftbooks.com User , 19 years ago
This book continues the nonstop action that is in the Saga of Darren Shan. When a mad vampaneze runs loose in Mr. Crepsley's hometown, Darren, the snakeboy, Evra Von, and Mr. Crepsley must journey there to stop him. Mr. Crepsley goes out every night to investigate. Darren and Evra become suspicious when they hear of several bodies that were found DRAINED OF BLOOD!!! (They do not yet know of the mad vampaneze.) Darren and Evra start following Mr. Crepsley. In a butcher's shop, Darren comes face to face with the mysterious vampire's cousin. In another heartpounding adventure, Darren once again delivers a brilliant book. Highly recommended.

Author Darren Shan does it again!!!!

Published by Thriftbooks.com User , 19 years ago
"Tunnels of Blood," the third volume in Darren Shan's "Cirque Du Freak" series, is buy far the best so far. In this volume, we learn lots more about vampires and one of their greatest enemies, and also a bit of history. Like all the "Cirque Du Freak" books, this one ends with the dreadful last three words (as all the books would I predict) TO BE CONTINUED, and the fourth book is not coming out till September!!!!! The publisher has got to get with it and start publishing more than two books in this series a year!!! People in the U.K. are soon to get the SIXTH book in the series. A great read!!!

Published by Thriftbooks.com User , 19 years ago
Darren Shan is at it again with his recent installment of the DARREN SHAN SAGA. With "Tunnels of Blood," we find Darren adjusting to his peculiar vampire life. Drinking blood, performing spiders...it's all new to the rookie half-vampire. When the ever-mysterious Mr. Crepsley brings Darren and his friend, Evra, to a city, things start getting odd. Bloody murders, the nighttime disappearance of Mr. Crepsley; things begin to get messy. With the addition of a girl, Debbie, into the meddle, Darren's safety and even life may be in peril. Darren Shan applies a suspenseful plot to his excellent writing: the combination of quality story-telling and edge-of-your-seat action at hand, the reader of this great tale won't want it to end.
Copyright © 2020 Thriftbooks.com Terms of Use | Privacy Policy | Do Not Sell My Personal Information | Accessibility Statement
ThriftBooks® and the ThriftBooks® logo are registered trademarks of Thrift Books Global, LLC