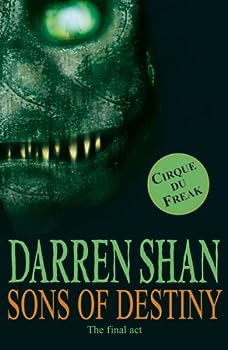 This description may be from another edition of this product. Time seemed to collapse... There was a sharp stabbing sensation in my stomach... Steve crowed, "Now I have you Now you're gonna die " Dead if he loses - damned if he wins. The time has finally come...

Published by Elizha , 2 months ago
Greatt

Sink your teeth into it!

Published by Thriftbooks.com User , 14 years ago
Darren Shan is just an ordinary school boy, until his friend Alan Morris finds a flyer advertising the Cirque Du Freak, an illegal freak show. There he sees Alexander Ribs, a man with bones like rubber, the Wolf-Man, Truska, the bearded lady, Rhamus Twobellies, and many more. But he also saw Mr. Crepsley and his amazing poisonous performing spider, Madam Octa, who leads Darren to becoming a half-vampire! Through books 1-11, Darren makes the trek to Vampire Mountain, no small feat for one his age, endures the Trials of Initiation, fails, becomes a ruler of the vampire clan, and has his best friend in the entire world, Steve (Leopard) Leonard turn against him. Now, Darren finally returns to his home city many years later - where Steve has sworn to wreak havoc - to find that his now grown-up younger sister, Annie, is married to Steve, but she doesn't love him. Darren doesn't know this yet. He wants to kill Darius, Steve's son, in revenge for Steve killing his other friend's son, Shancus. But then Steve reveals who is Darius's mother, Annie, and if Darren killed Darius, he would be killing his own nephew. And cackling like a demon, he left Darren and his friends in the blood-drenched night. Then, Darren is off to fight. It is time for The War of the Scars, either Darren or Steve dies, whoever triumphs will become the Lord of the Shadows, and destroy the world. Darren, wounded and burning, finally stabs Steve's shriveled forgery of a heart, but when an ancient prophecy is revealed by a mysterious little man called Mr. Tiny and his witch-daughter Evanna, Darren is so upset, he kills himself. He and Steve both drop into the Lake of Souls. What happens here? This book made me realize the horrors of real life, and if you start reading this series, you will NOT put them down! Dare to be scared? Sons of Destiny is a page-turner, awesome and grueling, it will leave any reader hungry for more. (Ages 11-16) By Nadia (Pakistan)

Shan has done it again!

Published by Thriftbooks.com User , 15 years ago
I love this series to death! I was super excited when the last book finally came out. I read it in less than a day. I couldn't put it down. I was shocked at the end. I was literally almost in tears. I'm sad Mr. Crepsley wasn't in the last three books. He was my favorite character and I'd love this book even more if he was in it! I have to say, I'm sad that it's over. I've read this series at least three times. I love vampire books, and this series was by far the best. It gets boring with your typical "blood-sucking, night walkers" vampire stories, but Darren Shan put a total twist on it and that made it new and refreshing. That's what I loved most. And the fact that he uses his own name saying it really happened makes it a little better. Overall, it was an excellent book!!!

the best book ever

Published by Thriftbooks.com User , 15 years ago
I personaly enjoyed this series and I really never read.I would widely suggest this book to anyone young or old.It leaves you horrified with the shocking ending.Let me just put it to you you this way buy it . The boys will read it and love it even if they hate reading.So this is your chance to get your kids reading and up off the x box or ps2 or tv.

This book is the greatest!

Published by Thriftbooks.com User , 15 years ago
This book was great! It was so good that when I started reading it, I couldn't put it down. I really enjoyed this entire series. However, I didn't really like the ending to this book. I guess I really didn't want the series to end. If you like stories about vampires I recommend the entire series. Start at the beginning so you'll get the entire story. NF

Great, but this guy needs to lighten up

Published by Thriftbooks.com User , 15 years ago
Glad the last book did not have a trite ending. As we end Book 12, there were some loose ends that were not resolved to my satisfaction at the end of this series. [[[That is a personal statement and opinion.]]] Vanca was foretold not to be in either future by Evanna...I think someone owes us another book...if his ego deflates some....it looks like the author got tired and wanted to go to a harder edged series and abandoned this one without tying the loose ends sufficiently. These characters were not given the type and pages they were due. They were cheated (or the readers were). More is begging to be written about what happened to them...the continuing tales of...? Harket Mulds Evanna's twins Mr Crespley Mr Tall Shancus Kurda Smaltz After digesting the whole series, Darren had a rough life. So rough its an emotional investment to keep up. Brutally yanked from his loving family Betrayed by his cherished best friend Steve Leopard Sacrificed everything for his best friend who hated him for it How does a man with the highest character, Mr. Crepsley, force a child into a lifetime of servitude for stealing a bug? How is a child forced to lose his humanity to become a vampire for stealing a bug. For two weeks. I understand the next series, Demonata is much harder edged than Cirque du Freak. Considering the relentless slew of disasters and heinous tragedies befalling Cirque du Freaks characters, I plan on taking a pass. This guy certainly loves writing about atrocities that befall people.
Copyright © 2020 Thriftbooks.com Terms of Use | Privacy Policy | Do Not Sell My Personal Information | Accessibility Statement
ThriftBooks® and the ThriftBooks® logo are registered trademarks of Thrift Books Global, LLC