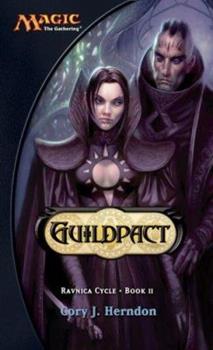 In the time following the devastation and the plague that had ravaged the land, the Syndicate prepares to seize the land, but the Gruul will risk everything to prevent their subjugation. Original.

The book was good, this review is not.

Published by Thriftbooks.com User , 15 years ago
Imagine a brand new world, somewhere in the universe. Can you see it? Ok, now imagine that this world is completely covered in cities. No, one enormous city: Ravnica, the City of Guilds. In Ravnica, there are ten ancient guilds who govern their people and their activities in a manner defined by a document over ten thousand years old, called the Guildpact, which binds each guild to a specific duty in the world for the benefit of those who live there. It empowers the lowest Wojek lawman to arrest even a mighty guildmaster and holds all ten guilds to their vows. The three guilds focused on in this book are the Izzet League, the Orzhov Syndicate, and the Gruul. Guildpact, the second book of the Ravnica series, gives the reader three perspectives on a major event within the city, one from Agrus Kos, a former Wojek lieutenant and hero to the people, another from Teysa Karlov, the new Scion of the legally-minded Orzhov Syndicate, and the last from the point of view of Crix, a messenger goblin and favored experiment of the high-ranking Izzet magelord Zomaj Hauc. The events they witness are monumental, focused on the aftermath of a mana-compression singularity bomb test in a section of Ravnica occupied by savage Gruul undesirables. Though seen at first as an attempt to clear a new path for development, something greater and more sinister is at hand, as the three find out in this exciting new expansion in the Ravnica storyline from Corey Herndon.

Published by Thriftbooks.com User , 15 years ago
I purchased this for my 14 year old son, and he loved it.

Kos you want to know what happens next!

Published by Thriftbooks.com User , 15 years ago
Centuries ago, the entire Utvara region of Ravnica was devasted by a mysterious explosion. Every living body vanished in its wake and the only visible remnant of the event was the Schism that appeared in the sky that fateful day. The inorganic wasteland was declared a reclamation zone and a fallow period barring Utvara's repopulation ensued. Time's almost up. Guildpact follows Kos, now a retired Wojek, twelve years after the decamillennial into Utvara - a treasure trove waiting to be exploited. The Gruul, Izzet, and Orzhov have vying interests for control of the region, but there's something lingering in the air besides the kuga mot to which all are none-the-wiser. The Schism is growing. There's a whole new cast of characters than in Book I, and you'll be longing for Feather, Fonn, and the familiar back in Ravnica proper. Yeah, it's painful. Among the notable in Book II are Teysa and Crix. You'll love them, you'll despise them, and then you'll love them some more. Thrulls, ogres, the nephilim, hyrdopyro- and pyrohydromancers, imps, half-demons, drakes, Niv-Mizzet the Dragon, and the lot are all waiting to meet you in Guildpact. The ending couldn't be more suspenseful. Dissension, hurry up!

Published by Thriftbooks.com User , 15 years ago
I thought the first book in this series (Ravnica) was OK but a little dry. This book was great from the start and got better as it went along. I was glad to see Kos again and Teysa and Crix were great characters. I have read several magic novels and this was one of my favorites.
Copyright © 2020 Thriftbooks.com Terms of Use | Privacy Policy | Do Not Sell My Personal Information | Accessibility Statement
ThriftBooks® and the ThriftBooks® logo are registered trademarks of Thrift Books Global, LLC