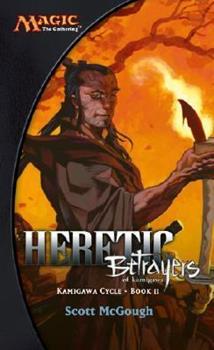 Now employed by Princess Michiko and in debt to Myojin of Night's Reach, Toshi Umezawa struggles to balance his commitments with his own quest, until the Kami War threatens to engulf all Kamigawa, a powerful spirit beast threatens the world, and the Daimyo conceals a sinister crime that could have profound repercussions for everyone. Original.

Published by Thriftbooks.com User , 14 years ago
Heretic: Betrayers of Kamigawa (Kamigawa Cycle: Book 2) By: Scott McGough In this the second book of the Kamigawa Cycle, we find our characters with some questions answered and with new views of the world around them. Princess Michiko now knows the cause of the Kami War and what her connection is to it and Toshi has finally found something to believe in and embrace. This part of the story takes place a few months after Michiko was "rescued" from Toshi and finds both her and her sensei Pearl-Ear locked away in imprisonment. Pearl-Ear is blamed for Michiko running away and not returning her in a prompt fashion. Toshi is a changed man, he has become a more spiritual person but still a member of the Hyozan Reckoners. Hidetsugu, the ogre is still in a rage over the loss of his apprentice and decides to wage war on Choryu's academy, at the soratami, and the Kami they worship. The final battle for Kamigawa has begun and the most evil presence in all of the spirit realm has shown itself in the area surrounding Eiganjo and the tower in which Konda resides. The evil spirit looks to gain what was taken from him over 20 years ago and will destroy anyone and everything in its path. But what remains to be seen is where Toshi stands in all of this. Is he really trying to help save Kamigawa, or is he just working towards his own goals? This book is awesome, no way I can score it less than a 10/10 (of 5 stars however you want to look at it). I just could not put this book down, I think I'm more entranced with it than the Mirrodin Cycle and that was one wicked awesome cycle of books. And as usual, try to work around the editing problems. Even with the problems, it's a very good read and very well written in my opinion.

The Kami War rolls on, even better this time around

Published by Thriftbooks.com User , 16 years ago
This second novel in the Kamigawa cycle is a noticeable step up from the first installment (/Outlaw/). That's not to say that the first novel is bad - indeed, it supplies a great story with impressive character development, and I highly recommend it. But /Outlaw/ was marred by an unbelievable number of editing errors. /Heretic/ fares a good deal better. This time around, the story flows much more smoothly. /Outlaw/ had to struggle with setting the stage for this massive world that is, quite frankly, very unfamiliar to most Westerners - and rather foreign to the world of Magic in particular. /Heretic/ has none of this background baggage to deal with, instead plunging right in and letting the now-fully developed characters shine. There's a lot of action in this book, and a good deal of the pieces of the Kamigawa puzzle come together solidly. /Heretic/ is a very fast and enjoyable read. Of course, I still have to nitpick - /Heretic/ has more editing errors than a novel should. It's nowhere near as bad as /Outlaw/ was in this regard, but the errors do pop up enough that it can be a bit disturbing. But /Heretic/ is very worthy of a full 5 stars, and I will say that this is one of the best fantasy novels I've read in some time (due in no small part to the fabulous setting of Kamigawa itself). If you haven't gotten into this cycle yet, grab this book and /Outlaw/ and prepare for a great reading experience.

Published by Thriftbooks.com User , 16 years ago
I managed to read this book on the bus ride to a state basketball game. McGough is a great writer that can carry the reader along from chapter to chapter, making me not want to put down the book. The content also gave me the answers to questions I had from Champions of Kamigawa. At first I was on Konda and his people's side, but now I am neutral as both sides (kami and humans) have issues. Toshi has become one of my most favorite characters, next to Ixidor and Glissa, from Magic novels. I anxiously await the third novel of this set.

Good novel for Magic the Gathering

Published by Thriftbooks.com User , 16 years ago
The 2nd book of the Kamigawa cycle reveals more explanation of what Konda had really done to piss off the spirits. The lead characters are still Toshi and the princess. Toshi has grown more powerful since he "found religion" in the form of the Night Myojin. Like the first book, his power is more subtle and not the kind of world-wrecking power of Kamahl in Onslaught cycle. The heroes try to remedy what Konda has done, and in the process they met with the wizards and the soratami. The big bad spirit (O-Kagachi) appears and start wrecking havoc. Familiar characters in the first book also make appearances, like Konda, Godo, Kiku, Marrow-Gnawer and the Ogre (can't remember his name). Some new characters get couple of lines of mention, like Uyo. The white and blue dragons in the cards also appear in this book, but again their powers in the book does not tie with the card powers. For example, Keiga the Blue dragon is supposed to gain control of target creature when it dies. In the book it does nothing of that sort. Likewise Yosei the Morning Star did not show any extra special powers. If you play the card game, you will find that strangely enough, there was no mention of the Ninjas that featured so prominently in the cards for this 'block'. Likewise some famous characters like Ink-Eyes, Kentaro, or Higure never got any mentions in this book. This is one of the better written Magic the Gathering novels that I've read. Like the first book, Betrayers is a good and fast-paced read. If you like the first book, get this one too!

You never know what to expect from Toshi

Published by Thriftbooks.com User , 16 years ago
Few novels have keept me in the "shadows" like this one, the reason is it's main caracter Toshi Umezawa, a dishonor samurai that keeps a hidden agenda even to those "close" to him (he's not really attach to anyone but himself), he lives in the swamps and is accidentaly involved in a battle between beeings from the spirit world, a Princess and her escourts and a power mad Daymio. The book is loaded with rich caracters that give the writer the oportunity to share their tougths with you and show you the domain of Kamigawa trough their eyes. Remember that this is a fantasy book so be on the look out for some dragon action and a very nasty ogre. Heretic is the second part of a trilogy, so don't expect an "ending" right away. Don't read it unless you have read the first book: "Outlaw".
Copyright © 2020 Thriftbooks.com Terms of Use | Privacy Policy | Do Not Sell My Personal Information | Accessibility Statement
ThriftBooks® and the ThriftBooks® logo are registered trademarks of Thrift Books Global, LLC