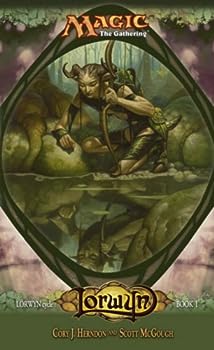 This description may be from another edition of this product. Welcome to the new world of Magic: The Gathering ! Elves live in a world of unforgiving perfection. It is survival of the fittest--and none but the most beautiful and deadly are allowed to survive. So...

Rated 4 for Magic players; rated 3 for other fantasy buffs

Published by Thriftbooks.com User , 13 years ago
Lorwyn is a very good book if you play Magic the Gathering and have started playing the new block of cards (Lorwyn and Morningtide). The book brings the cards to life because the book explains the background for many of the cards. For example, the faerie and flamekin cards. Also, Syyg the merrow boatsman. For fantasy readers who are not playing the Magic card game, I consider this simply average overall. The plot moves along nicely enough, a couple of the characters are well-developed (especially the flamekin) but the main character (Rhys the elf) falls very flat and there are many places in the plot where the reader just needs to accept what is happening without much (if any) explanation. I love playing Magic so I'll read the next book (Morningtide) but if you don't play Magic, you probably want to spend your valuable reading time on something else.

For those who like your Elves on the Nazi side

Published by Thriftbooks.com User , 14 years ago
Most MTG book I find on the boring side. This book was not. In fact, it was hard to put down. More so than most MTG novels, this novel really gives us the feel of Lorwyn, including the attitudes of the various races. The elves come across as Nazis, even so far as their desire to commit genocide on boggarts and total control over all others, not liking even the other green-aligned races. Giants come as singular of thought. Faeries reminded me of the old Corax wereravens of Werewolf: the Apocalypse, with their gregarious and inquisitive nature, although with a slight malevolent twist. The nature of flamekin, as depicted by Ashling, really helps to delineate this new race. The kithkin were the least interesting of the races; their groupthink could have been better shown, although the telepathy depicted was a solid plot device. Definitely a recommended read. 5 for Magic players, and a mild 4 for others.

Published by Thriftbooks.com User , 14 years ago
I have been reading SF & F for 40 years, and although I have gamed a few times this is the first one in the RPG sub-genre that I have read. I have to say I was pleasantly surprised. While not up to the standards of McCaffrey, Norton or other greats, Herndon and McGough show definite promise. The story is different enough from the usual ones about elves to keep my interest and even to invest in the next book in the cycle. I definately want to see where they take this. If the authors can maintain their good start, and get a much better editor and proofreafer, they could easily make it into the "mainstream" of SF & F.
Copyright © 2020 Thriftbooks.com Terms of Use | Privacy Policy | Do Not Sell My Personal Information | Accessibility Statement
ThriftBooks® and the ThriftBooks® logo are registered trademarks of Thrift Books Global, LLC