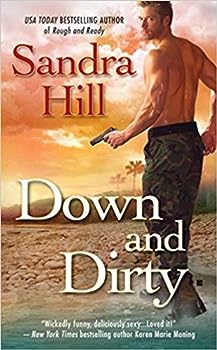 This description may be from another edition of this product. Punished for an indiscretion, Navy SEAL and all-around tough guy Zachary Floyd is forced to head a new SEAL-like program for women. There he meets an alluring Norsewoman, who's escaped a nunnery, her...

Published by Thriftbooks.com User , 13 years ago
Down and Dirty (Viking Time-Travel) I so love this series... I read them all, and I re-read them. If you love men, you've got to read this series. The heroes are delicious! The heroines are so human, and with strong senses of humors! I laughed, I cryed. Its a mini vacation from everyday life. LOL!!

Published by Thriftbooks.com User , 13 years ago
The book is as good if not better than her others. Love to read Sandra Hill and can't wait to get the next book.

Published by Thriftbooks.com User , 13 years ago
Sandra Hill is one of my favorite authors and her humor is so unique. In ROUGH AND READY Pretty boy Floyd met Britta the big and beautiful Viking warrior, when he went to the past with Tor and defeated the evil Steinoff. He has been unable to forget her and she has been in a convent for two yrs trying to avoid her father's plans to marry her off to an evil jarl. Zach Floyd has learned he has a six yr old son by the daughter of a leader of the Taliban. So when he hears of her death he launches a one man offensive and steals his son from the American hating grandfather from hell. But Samir has lost the one person who loved him and he is unwilling to open himself to more pain. But he is very willing to heap pain on this father who finally came for him. Zach has gone against orders and winds up training WEALS or Women on earth,air and sea. Imagine his surprise to find out that Britta is one of those women. Britta had been in the convent for two yrs and has not forgotten Pretty boy. When her father sends one of the nuns home dead after being tortured, she realizes she must convince him she is dead. So she and Sister Margaret plan for it to look like she jumped from the cliff, unfortunately sister Margaret is tipsey and Britta falls over the cliff to land in California, at Coronado. She is thought to be the replacement for the recruit from Norway. Britta has not forgotten Pretty Boy or his blattent attempts to get in her furs. She may have time traveled but she still has her common sense. The stage for humor and lust is set. If you have read any of Sandra Hill's stories you know you are in for a treat. I love these Viking stories and hope she never runs out. Do not miss the fun.

Published by Thriftbooks.com User , 14 years ago
In ROUGH AND READY former Medieval Viking now Navy Seal Torolf Magnusson traveled back to eleventh century Norway to aid Hilda Berdottir and the abused women of the Sanctuary end the tyrannical reign of Steinolf. One minute Torolf and his SEAL buddies (born in the 20th Century) were sitting in a longship replica in the middle of a fjord and the next they had traveled back in time. However, once the battle had been won and they had returned home, Torolf's modern counterparts all had trouble wrapping their minds around the "time travel' concept and nobody had spoken about it since. Still Zachary "Pretty Boy" Floyd had fond memories of a big blond and beautiful warrior by the name of Britta. Pretty Boy had no trouble getting women. They had a tendency to throw themselves at him. No, he hadn't been a monk since his return to the present but he couldn't help wondering from time to time, what if? His story is Down and Dirty. Not that Zach had much time to wonder about much these days. He'd landed himself in a heap of trouble, make that responsibility. Frenzied sex in the heat of battle on a mission in Afghanistan over five years ago had resulted in a son Zach had recently discovered. The child's mother had been killed fighting against the Al-Qaeda and her own father, a powerful and brutal leader who as a result gained custody of little Samir. While on a mission Zach had recovered "Sammy" and had returned with him to the U.S. The "kidnapping" had become a diplomatic nightmare, and Zach's punishment had been assignment to the Navy's latest experimental program, WEALS a female version of the SEALS. Yes he definitely needed a woman ... to babysit Sammy the snot. Oh he loved his son, but what a handful! Britta the Big, had lost interest in warfare following the departure of her friend Hilda and the time traveling SEALs. It had been thought that they'd all perished in a mudslide. But when Britta left the walls of the Sanctuary she had become once more at the mercy of her [...] father and brothers who had it in their minds to marry her off to some loathsome lout for their financial benefit. It was thus that Britta found herself behind the walls of a nunnery. But even there she was not safe for her kinsmen had no qualms about picking off anyone who stepped beyond the shelter of those walls. Already a sister or two had gone missing. And so to ensure their safety and her own, Britta had hatched a plan to fake her own death. The best laid plans of mice and men (and women) often go awry at the most inconvenient times. One minute Britta is planting evidence of her death beneath a cliff in eleventh century Norway and the next she is hanging from a net and on a Naval installation in 21st century Coronado, California. She'd escaped torture by her father to face a new kind of torture as one of the new WEALs recruits. If that's not enough, the loathsome lout Zachary is one of her torturers! Pretty Boy needs a woman alright and it better NOT be just to babysit his p

Published by Thriftbooks.com User , 14 years ago
I waited for Britta and Pretty Boy's story for almost a year. I loved it, I laughed so hard everytime Britta was around Pretty Boy, calling him differents names, and asking him for more Os. Also Petty Boy's son, Sammy was something else, hilarious every single time. What can I tell you, I love this series (viking-navy SEALS). I had read every single one of them and I can't hardly wait for the next one. AWESOME BOOK WHAT ARE YOU WAITING FOR? get your own.
Copyright © 2020 Thriftbooks.com Terms of Use | Privacy Policy | Do Not Sell My Personal Information | Accessibility Statement
ThriftBooks® and the ThriftBooks® logo are registered trademarks of Thrift Books Global, LLC