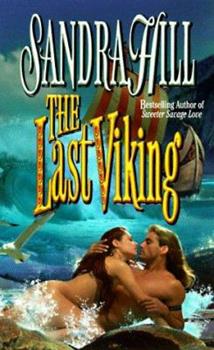 "Sandra Hill writes stories that tickle the funnybone and touch the heart." --Susan Wiggs, New York Times bestselling author When a rugged, uncouth, almost impossibly manly Viking warrior from ten... This description may be from another edition of this product.

Witty, With a Twist

Published by Thriftbooks.com User , 21 years ago
No one can honestly claim that Sandra Hill has not done her Viking research. I have read several of her books and found each one to be well-researched in the Viking culture.There is a lot of humor throughout this book (I'll never look at a bottle of Breck shampoo the same way again), and Rolf & Merry-Death belong together!I enjoyed the little twist on time travel here. Instead of the heroine traveling back through time and learning to live without electricity and indoor plumbing, the hero comes to the future! His struggles to acclimate himself in the here and now are fun to read about.This book touches your heart. This was the best Viking book I have read by Sandra Hill. Keep them coming!

You can't help but love this book

Published by Thriftbooks.com User , 21 years ago
This is the first Sandra Hill book I have read and it was absolutely brilliant. The storyline was different to most time-travel books. This one has the hero (ROLF) bought forward from the tenth to the twentieth century instead of having the heroine go back in time. The story is hilarious, I have never laughed so much as I did reading it, especially at some of Rolf's pronounciation of the words. Merry-death(Meredith) is a wonderful herione especially when Rolf is trying to put her in her place. He is a real chauvanist but very lovable with it. I can guarentee this book will have you in stitches and tears, a brilliant read. Well done Sandra. I do hope there is going to be a follow on to this book. I can't wait.

Published by Thriftbooks.com User , 21 years ago
This book was a delightful surprise. To be honest, I wasn't expecting to enjoy this one as much as I did her other time travels because of the fact that I usually like it better when it's a modern day heroine going backward in time, rather than when the story's about a man from the far-away past coming forward to the future.Typically in romance, whenever someone from the past comes forward, you get those kind of books that waste scene after scene watching the time traveler freak out the first time they see a lightbulb, and then a shower, and then a car, and god forbid if they see an airplane. Then, of course, we know what's coming next...the hero will feel obliged to take his sword to the offending modern conveniences. Microwaves will be rendered useless, cars will be taken apart, furniture will be used as kindling... Scenes like these are funny *once*, then they become a dead bore.Hill shies away from this overdone scenario nicely, yet in a way that still makes the hero come off as a believable time traveler. After all, any time traveler would be bound to be somewhat in awe of the gadgets of the future. Hill gives him the awe without hitting you over the head with it.This book was hilarious from start to finish and quickly became one of my favorite Hills. Although I've enjoyed all of Hills novels at a 4-5 star level (except for "Love Me Tender" and "The Reluctant Viking"), the only other contender this book had with me is "The Love Potion". They are both irresistibly funny and sexy, making it hard for me to decide which was better...

Published by Thriftbooks.com User , 21 years ago
I had not read anything by Sandra Hill until this book. The write up on it intrigued me and so, I purchased it. It was a great purchase and one which I have re-read several times.Rolf is a 10th century Viking who is transported through time to meet his match in Meredith, whom he calls, "Merry-Death"! Meredith, a college professor, needs his help in fulfilling her grandfather's dream of a college program which builds a Viking longship using only implements and materials which are historically accurate to the time in which these ships were built. Rolf is a master shipbuilder of his time. However, Rolf has an obligation to his family in his own century and so, seeks a way to return to his own time. The conflict - he has fallen in love with "Merry-Death" and is torn between his love for her and the obligation he has to his family and the people of his own time.The quirks in the story, the play on words, the tension between the hero and heroine, the unique way in which Rolf sees the 20th century and how he communicates with those around him is a scream - as are his favorite food combinations! (you just have to read it to believe it!)This book is one you will put on your keeper shelf and read again and again for the fun, the laughter and the romance.If you haven't yet tried it, run out and find one. You'll be glad you did.

Hoping it is NOT the Last Viking book...

Published by Thriftbooks.com User , 22 years ago
This is not one of the 4 book Viking Series but I liked it just as well. No other author can hold a candle to Sandra Hill and her Viking stories. A worthy read.
Trustpilot
Copyright © 2022 Thriftbooks.com Terms of Use | Privacy Policy | Do Not Sell My Personal Information | Accessibility Statement
ThriftBooks® and the ThriftBooks® logo are registered trademarks of Thrift Books Global, LLC