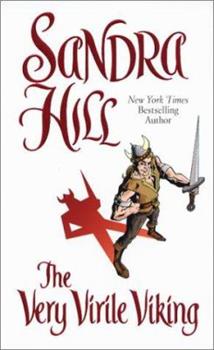 Strangely transported to a kingdom called "Holly Wood, " Viking warrior Magnus Ericsson meets the woman of his dreams--a modern-day winemaker who fails to recognize Magnus as her soul mate. So he must prove to her that he is a man of exceptional talents. Original.

Published by Thriftbooks.com User , 18 years ago
The most recent (and heaven forbid, not her last!) installment of Sandra Hill's Viking Saga's, this story quickly became very dear to my heart. Once again, Sandra has not disappointed us. Magnus'endearing brood of 9, along with his commitment to maintain his vow of celibacy keeps you laughing out loud, at one point and wiping the tears at another. His unexpected adventure and eventual "Destiny" will keep you entertained to the end. I could not put this book down, and when I had to leave, all I could think about, was how soon I could pick it up again...Well written, fun and not to mention very steamy, the author has once again come through for us. If you are a fan of time travel, and especially Sandra Hill you will not be disapointed...Sandra, Please, Please, Please don't make this the last! We love your Viking stories and look forward to every new one!

A Hoot, in the very best way

Published by Thriftbooks.com User , 18 years ago
I bought this book because I was so amused by the title; I never had heard before of author Sandra Hill. Please understand that this is not a conventional story. That said, if one can accept time-travel, whimsy and hot (HOT!) sex, then this is a fun read. (Have you heard the one about the medieval Viking warrior whose ship washes up on a Hollywood movie set? Ba dum bum!) By virtue of everything going on in this plot, VVV truly is distinctive.Author Hill writes beautifully, but there is so much doing in THE VERY VIRILE VIKING that it is easy to overlook her skill. Her historic detail seems knowledgable and plausible, though I was surprised to learn that medieval Norsemen spoke Middle English. Still, in reading a novel such as this, a reader either accepts the premise and goes along with the fun, or the reader walks (or runs) away from the book.Sandra Hill displays a keen sense of humor, again easy to overlook in this well-paced tale, as the plot flows along so nicely--dare I say, even so plausibly. It is entertaining to read her displaced character's take on our modern life, on such basic necessities as deodorant and sanitary napkins and "dome-noes" pizza. And, as I already mentioned, her sex scenes are as good, or better, than any others I have read in the genre of racy romance--so be warned, because VVV definitely is not for the faint of heart!I definitely look forward to reading more of Ms. Hill's work in the future.

Published by Thriftbooks.com User , 18 years ago
I read Truly Madly Viking and The Last Viking, and this is a WOW of a end to the story of three brothers. It's funny, sexy, charming and just sparkles with wit!Think this is her best book yet.

Published by Thriftbooks.com User , 18 years ago
I enjoyed this book from page one to the end, and laughing all the way...I mean 10th Century Viking discover Wallie World...what a howl! Magnus is the brother from Truly Madly Viking and the Last Viking.Magnus is sort of the joke of his village. He has 13 kids, two have died and he is just marrying off his eldest daughter. We soon begin to understand, that not all these kids are his, but every woman wanting to get rid of her unwanted baby has passed it off as his. But Magnus is not stupid, he just loves his children, though they do drive him - and the village nuts at times. So he takes the A-viking and ends up as his brothers did in present day. Boy when they go A-Viking they really go A-Viking.In this one he and his 9 kids land in the land of Holly & Wood...and he instantly finds his destiny in Angela the granddaughter of Rose, owner of the Blue Dragon winery. Rose want grandchildren, wants her granddaughter happily married and would like to see the series of accidents reversed so once more the winery can produce wine.It is charming and so utterly witty! I simply loved this book, the best of Sandra Hill.

Published by Thriftbooks.com User , 18 years ago
Sandra Hill goes for tongue through cheek with this charming book and scores big! This is her best work yet and a definite keeper!Magnus Ericsson is a simple farmer. He loves the land, how to make things flourish and multiply...oh, boy does he....a father with 11 kids from 4 wives and six lovers and various one night after too much mead stands! Worse, he has no mother for his herd of kiddies after all the parade of females through his life, because they had died or possibly run for their sanity when faces with his rambunctious kiddos. Magnus has just been presented with a baby about a year old, told it's his, so he is somewhat of a joke in his Viking settlement. Taking his pride - and 9 of his children - he boards a longship and heads out to find Vineland in the new country. Cut to present day, you meet Angela and her grandmother Rose, trying to save their family Vineyard and Winery. They are all that is left of their family. Angela is divorced, working as a real estate salesman just so she can plough the money into saving Blue Dragon Winery, her grandmother's love. Rose wishes for lot of grandchildren, but see no hope as Angela has divorced "the Creep" the year before and shows no interest in men. What a grandmother to do?? She make a wish on her rosary for a big strong man and lots of grandchild...asap please.Off on the other side of the country, having found Vineland and left in shame because of the kids antics, Magnus and his brood hit a strange fog that seems to have no end. Suddenly they enter a bright area, so blinding, and find they have landed in Holly and Wood a most strange and adventuresome country.Naturally, Rose's wish has summoned him to where he and the children are very needed, but will Angela wake up and smell the wine??It is so charming and utterly witty, the droll humour is absolutely brilliant. Considered Hill had to juggle so many secondary characters with the children, you fear the leads would get lost in the stampede. Not. She gives life to the kids of all ages - makes them adorable without being Stephen Spielberg smaltsy - and yet more than deals with the love interest of the leads, is very sexy fashion.An Absolutely must for Hill fans. For those who have not discovered this wonderful lover of Vikings that refuse to stay in their own time, you cannot do better that this one for an introduction.Simply divine!!!
Copyright © 2020 Thriftbooks.com Terms of Use | Privacy Policy | Do Not Sell My Personal Information | Accessibility Statement
ThriftBooks® and the ThriftBooks® logo are registered trademarks of Thrift Books Global, LLC