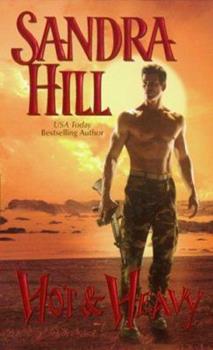 Madrene doesn't know what's happened when she's suddenly flung forward in time from the Viking era to the twenty-first century--but she does know that a sexy Navy SEAL with searing eyes is mighty tempting in any time.

Seals and vikings oh my!

Published by Thriftbooks.com User , 15 years ago
What the heck do you expect from Sandra Hill - anything less than excellence? As usual, an awesome viking/seal adventure just waiting for you to buy it, take it home and treat it right - read it!! But pay attention: this is a fantasy so don't expect reality; suspend belief (such as "there is no such thing as time travel") and just ENJOY the book. If you don't like fantasy, don't buy then review the book in a negative; that's not fair. Warning: sex scenes are R.

Published by Thriftbooks.com User , 16 years ago
Hot & Heavy by Sandra Hill has been by far the best book I have read this summer. I love Ms. Hill's books because there is such a great mixture of romance, comedy, and just a hint of danger. I have read all of Ms. Hill's viking stories and this one is has to be my favorite.

Published by Thriftbooks.com User , 16 years ago
This is a GREAT Sandra Hill story which includes Navy SEALS, Vikings, time-travel, with a Cajun thrown in, plus action, plenty of humor, emotions and loads of typical Sandra Hill asides. She managed to include it all. I LOVED it, my husband chuckled his way through the book and now I am going to loan it to my girlfriend who I also got hooked on anything with Sandra Hill's name on it. I highly recommend this book to all and the same goes for all her books.

Published by Thriftbooks.com User , 16 years ago
Anyone who has read a Sandra Hill book will know what to expect from this one. Anyone who has not read a Sandra Hill book needs to read this one. For humor with a hot romance and a tongue in cheek attitude nobody does it better than Hill. Ian MacLean is a Navy SEAL, while on a mission to Iraq his team literally picks up a woman, who is thought to be the lover of a terrorist. This straight arrow, upstanding, by the book soldier is dumbfounded, confused and just plain maddened by the gorgeous female who simply wants to raise an army and lead them to recover her fortress which was taken over by a slimy underhanded Viking. Did I mention that was in 1013 A.D.? Madrene Olgadottir has just escaped from 2 years of captivity in assorted harems. Having used a mystic spell she developed to save her self from being ravished. Now when she has escaped her latest owner and aquired a few of his jewels, all she needs is an army. An army like the one that has captured her. Madrene is known in the Viking world as a "shrew" of which she is proud. Never one to let one word do when 20 sound so much better and relieve so much more stress, she does not find this new world of magic very hospitable. Getting to Bagdad tells her this is not where she wants to be. The only way to get her to the US is for someone (Ian) to marry her and get an annulment when they find out what she knows about the terrorist. As she knows nothing about this new world, she becomes very frustrated. OF course, Ian has some frustrations of his own. Not the least is how attracted he is to Maddie. The relationship, steadily encouraged by Ian's SEAL team, is on a train headed for disaster. When the terrorists finally come to get Maddie, Ian finally settles his feelings for the shrewish wench. Is there such a thing as being too honest? Have a good time, read this book.

Published by Thriftbooks.com User , 16 years ago
Navy SEAL Lieutenant Ian MacLean leads his commando team on Operation Rodent; the objective is to eliminate terrorist leader Jamal ben Hassan in Northern Iraq. The SEALS safely land near their target with Ian entering an empty cave to use as the rendezvous point. In 1013 Madrene Olgadotter is paraded naked and in chains by Steinolf the Vicious who has taken over her home Norstead. When she continues to display a vitriolic tongue, he sells her to a harem. Over the next three years she is sold nine times, but no one touches her as she curses her owners with a shriveled jewel. She escapes her last captivity in Northern Iraq and hides in a cave. Madrene surprises Ian and hits him with a rock. She binds him, but he easily escapes. He believes the sharp tongued beauty is Jamal's girlfriend while she thinks he is a caliph's slave. As they become acquainted during the dangerous mission, they fall in love, but neither is sure how much time she has although she will soon find her parents and siblings living comfortably in twenty-first century California. The latest Viking time travel-SEAL romance is a fun tale starring two protagonists who belong together even if their birth dates are over a millennium apart. Madrene is terrific as she curses males with a shriveling ease until she meets Ian who thinks she is crazy but seems to enchanted by her with an opposite spell that leaves him in a permanent state of hardness due. Readers will enjoy Sandra Hill's latest romantic thriller starring this time a female Viking warrior and the SEAL she tames. Harriet Klausner
Trustpilot
Copyright © 2022 Thriftbooks.com Terms of Use | Privacy Policy | Do Not Sell My Personal Information | Accessibility Statement
ThriftBooks® and the ThriftBooks® logo are registered trademarks of Thrift Books Global, LLC