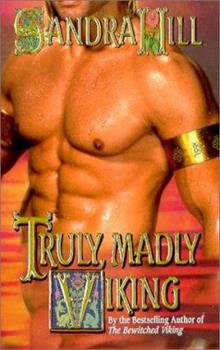 "Sandra Hill writes stories that tickle the funnybone and touch the heart." --Susan Wiggs, New York Times bestselling author Oh those Vikings Fans of Sandra Hill adore the sexy Norse studs the New... This description may be from another edition of this product.

What Do Women Really Want? A Viking.

Published by Thriftbooks.com User , 21 years ago
When you discover Sandra Hill's writing, the little chills start very quickly and you know you're not just in romanceland anymore. Snug in the hands of a truly gifted author, you're swept up and spun into a world that will leave you gasping from wickedly imaginative, roaring good fun-- and ultimately wiser for the adventure. There are the seriously funny crossed sigals between ultimate fish-out-of-water Jorund, a naked God of a Viking the likes of whom women haven't seen for the past few hundred years and Maggie, the practical psychotherapist/mother-of-two who adopts him as a patient. But Jorund is no rape-and-pillage stereotype--Ms Hill knows alot about Viking history and even more about the many shadings of the human spirit and the oddly beautiful ways that men and women connect. Viking values aren't so bad at all, it turns out, and the conflict between Jorund's original quest and his unfolding relationship with Maggie and the girls is both clever and poignant. In fact, this typically-flawed American male reader was reluctant to show this book to his wife out of Viking envy. Let's just say that, once you discover Jorund's brand of guyhood, you will ask as I did, "what woman in her right mind would not want her own Viking?" This book totally satisfies at so many levels, I believe you will hope as I do that Ms. Hill's Viking Chronicles continue at least until the end of this century.

Sandra Hill has a gift for writing keepers!

Published by Thriftbooks.com User , 21 years ago
Truly, Madly Viking By Sandra Hill Published by Dorchester Published July, 2000What do you get when you combine a mind-reading whale, a perfectly sane Viking warrior, a trip through time, and a modern day lady psychiatrist? Another keeper from Sandra Hill, of course!Jorund Ericsson was on a quest to locate his missing brother when Thora, the mind-reading whale, found a way not only to communicate with Jorund but also a way to deliver him naked as the day he was born to the year 2000.Claiming to be a Viking warrior, Jorund finds himself in a psychiatric hospital among the oddest assortment of lackwits he'd ever seen - and under the care of Dr. Maggie McBride. Now, in addition to his quest to locate his missing brother, Jorund must prove his sanity, contend with his growing attraction to Maggie, and get back to his own time where he belongs. But is his destiny in the year 998 AD or in Maggie McBride's 21st century arms?A hilarious adventure with fabulously crafted characters and a story that is as fast paced and unforgettable as it is engaging. Sandra Hill has a gift for writing keepers!

Published by Thriftbooks.com User , 21 years ago
Suspend disbelief of time-travel long enough to read Sandra Hill's sequel to The Last Viking and you'll have yourself a truly delightful reading experience. Chock full of humor and pathos, this latest addition to Hill's Viking series is bound to touch your heart at some level. At times I found myself laughing out loud, while other times I found a lump forming in my throat as I read of Jorund's (Joe's) loss of family, his bewilderment in a new land and his attempts to help those in the mental-health facility support group into which he has been thrust. His blossoming relationship with Maggie is definitely steamy and that with her twin daughters(who so remind him of his loss) tugged my heartstrings more than once. His fascination with TV soap operas, Big Macs, the Internet and other aspects of our lives that we take for granted are shown humorously through the eyes of one for whom this is a whole new world. Ms. Hill has just the right touch when it comes to creating intelligent, good-hearted characters with whom you can sympathize and filling their mouths with words that will make you chuckle or get misty-eyed. Her secondary character, former Navy SEAL, Steve Askey (did anyone else read ASCII in this?), and his story (and how Jorund helped Steve with PTSD) is poignant and served to increase my liking of Jorund as a character and Ms. Hill as an author. I, like the characters in the story, am skeptical of time-travel, but I do believe in miracles. If this describes you, also, then you won't be disappointed with Truly, Madly Viking.

Published by Thriftbooks.com User , 21 years ago
Jorund Ericsson comes back from war in the year 998, only to find his wife and twin daughters dead from a famine that has hit the Norse lands. Compounding the grief that the loss of his children brings to him is the fact that his younger brother Geirolf (The Last Viking) is missing at sea, possibly dead. Promising his father that he will find him, hopefully still alive, he and his other younger brother Magnus set sail for the area off Iceland in which Geirolf was last spotted. When the anchor on his longship becomes entangled in weeds, Jorund divests himself of his clothing and jumps overboard to remedy the situation. A few minutes later, he finds himself on the back of a killer whale, future-bound...Dr. Maggie McBride is a psychologist that works at the Rainbow Psychiatric Hospital in Gavelston, Texas. Taking her twin daughters for a trip to Orcaland, she's surprised to discover that more than just the whales splash around naked at the marine park. When a huge, naked man wearing nothing but his swordbelt comes cruising into the park on the back of a killer whale, Maggie takes it upon herself to have him sent to the Rainbow Hospital for evaluation, rather than to jail for endangering the mammals.Maggie and Jorund feel connected in some strange, unexplicable way from the moment their eyes first meet. Both of them have their reasons for denying the feelings they have for each other, which grow stronger every day. Maggie tells herself she can't care for Jorund because he's a patient in her mental health facility who fancies himself a tenth century Viking, whereas Jorund tries to pretend he feels nothing for Maggie because it complicates his feelings in regard to returning to the past. Both of them, however, eventually come to terms with the truth: they are afraid to make themselves vulnerable by experiencing love for another person...Truly, Madly Viking is Sandra Hill at her wittiest, funniest, hilarious best. From her descriptions of the modern world through Jorund's eyes, to the patients of the Rainbow Hospital we come to love, to Jorund's various escapades, you'll have a hard time trying to keep a straight face while reading this book. Entangled into the hilarious scenes Hill laces throughout the whole read, is a warm your heart, make you smile love story between a man and a woman who desperately need their other half, and a man and two little girls who need the kind of magic only a parent-child relationship can bring.As is the norm for most Sandra Hill novels, the secondary characters, specifically the patients of the Rainbow Hospital, are irresistably endearing. From Nurse Hatcher, who Jorund thinks would make a fine warrior, to Rosalyn, the nymphomaniac librarian, to Steve, the impotent Vietnam veteran (whose own story brings tears to your eyes), the well-scripted cast of Truly, Madly Viking will knock your socks off. Even the method by which Jorund comes to the present, though penned in Hill's signature w

Published by Thriftbooks.com User , 21 years ago
Fans of Ms. Hill may recognize Jorund, as Geirolf Ericsson's brother who we last saw in The Last Viking. Jorund is catapulted into the 20th century buck naked, save for his sword, on the back of a telepathic killer Whale. He is saved from being put into jail by Maggie McBride, a psychologist and the single mother of twin girls. Of course he is then admitted into the loce mental hospital and doctor and patient end up becoming very close.Generally I am not a fan of time travel books, but Ms. Hill creates such a fun world that I cn not help but enjoy her work. This is a fast fun and sweet read and if you are already a fan of Ms. Hill's it definitely worth picking up. If you have yet to read one of her books this is a good one to start with.
Trustpilot
Copyright © 2022 Thriftbooks.com Terms of Use | Privacy Policy | Do Not Sell My Personal Information | Accessibility Statement
ThriftBooks® and the ThriftBooks® logo are registered trademarks of Thrift Books Global, LLC