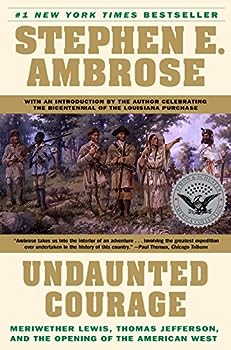 From the bestselling author of Band of Brothers and D-Day , the definitive book on Lewis and Clark's exploration of the Louisiana Purchase, the most momentous expedition in American history and one of... This description may be from another edition of this product.

Do Not purchase items from this seller. Unfortunately, I can't see from the order who the seller is.

Published by E. LEGAULT , 3 months ago
You should have the option of giving no stars. Book was listed as "very good condition." Not true, I would list this book as poor condition. I've read this book. It is excellent. I wanted to share it with a friend. So, I bought the hard back. It is water damaged. Front and back cover along with a lot of pages are buckeyes. The dust cover is stained and ugly. I tossed it into the waste can.

From Sea, to Shining Sea--And Everything in between those Great Waters!

Published by IndyGirl , 3 years ago
Jefferson's Vision for an America, From "Sea to Shining Sea," is "Blueprinted" by Two Brave Men: Lewis and Clark! Their expedition takes them across the "Father of Rivers," (Mississippi) and over Mountains of Granite, meeting various American Indian Nations along the way. These two Explorers spend time among many Different Warrior Nations, and learn how to use their weapons, while sharing tools and foods from second-generation "American" traditions. Adventures across both cultures--as well as their unique histories, are catalogued in this Fantastic book. The artwork, maps, diary entries, and reflections make this a book you Cannot put down, for long! While George Washington may be the Father of the New Nation of: "13 Individual States that greet the Sun rise of the East," Jefferson must Surely be considered the Father of: "Mighty Waters, and Snow-covered Mountains, that watch the Sun set in the West." Ambrose is a Genius! Read "Undaunted Courage" and Rejoice in being a human being, who can rent a car, and follow the paths of Lewis and Clark's Adventures!

Published by Thriftbooks.com User , 20 years ago
For an interesting and informative journey through an important piece of American history, I recommend "Undaunted Courage" by Stephen E. Ambrose. It's a portrait of physical courage. I also recommend "West Point: ... Thomas Jefferson" by Norman Thomas Remick for an interesting and educational journey through history that becomes the epic of the USA. It's a portrait of mental courage.

A Journey Through The Past

Published by Thriftbooks.com User , 20 years ago
"Undaunted Courage" is a wonderful journey through the past. It is detail and detail, mixed with adventure and adventure, with a pinch of suspense added in to create the feeling that you are there. The book has led me to a keen interest in Thomas Jefferson and his many little known but great contributions to America, which in turn led me to another journey through the past involving Thomas Jefferson in the book "West Point" by Norman Remick. Like "Undaunted Courage", "West Point" is another monumental feat of research. I have to thank Mr. Ambrose for writing like the good and interesting teacher who stimulates the student and opens the doorways to further knowledge.

Published by Thriftbooks.com User , 22 years ago
"Undaunted Courage" is historian Stephen E. Ambrose's masterfully told and compelling account of The Lewis and Clark expedition, one of the most historically significant journeys of exploration in American history. Relying extensively on the Journals of Lewis and Clark, Ambrose has put together a highly entertaining, meticulously researched, wonderfully readable, and fast paced narrative that interweaves a fascinating biography of Meriwether Lewis with a spellbinding account of the Lewis and Clark expedition. Ambrose captures completely with his fast-paced narrative the key events of the Lewis and Clark expedition. With a keen eye for detail, he describes the formation of the Corps of Discovery; its ascent to the headwaters of the Missouri River and its many encounters with native tribes along the way; the crossing of the "Great Portage," the Continental Divide, and the Rocky Nountains; and its encampment in November 1805 on the shores of the Pacific Ocean, at the mouth of the Columbia River. Also described is the expedition's return voyage, when the expedition once again searched in vain for a water route to the Pacific, and also when the expedition had its one and only hostile engagement with natives. Finally, Ambrose describes the aftermath of the expedition - how the Journals of Lewis and Clark came to be published, and the divergent (and, for Lewis, ultimately tragic) careers of these two great explorers.I found Ambrose's portraits of the key players in this real-life drama to be superb! Lewis is a born naturalist with a keen eye for scientific observation. He's also a gifted leader of men, ever conscious of his subordinates' welfare, and always gaining from them loyalty that is complete and willingly given. Clark, the "co-captain" (in reality the second in command), is a less gifted scientist, but equal to Lewis in leadership ability, and in many ways a more talented explorer and map maker. Jefferson, perhaps America's greatest genius of the Age of Enlightenment, is the man possessed with the vision to see that the voyage is undertaken. Sacagawea, the teenage Shoshone girl, kidnapped from her tribe, sold to Canadian traders, and the mother of a newborn son, is possessed with remarkable stoicism and diplomatic skills which become essential to the Corps of Discovery's survival. In addition, Ambrose proves himself to be a first-rate nature writer himself, with his breathtaking descriptions of the flora, fauna, and physical beauty of the American Great Plains, Rocky Mountains, and Pacific Northwest. "Undaunted Courage" is America's great adventure story, told by one of this nation's foremost contemporary historians and biographers. Highly recommended!
Trustpilot
Copyright © 2022 Thriftbooks.com Terms of Use | Privacy Policy | Do Not Sell or Share My Personal Information | Accessibility Statement
ThriftBooks® and the ThriftBooks® logo are registered trademarks of Thrift Books Global, LLC