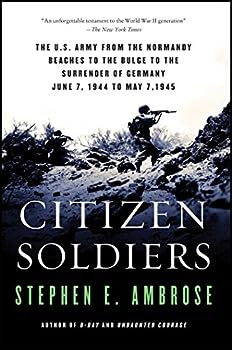 Citizen Soldiers: The U. S. Army from the Normandy Beaches to the Bulge to the Surrender of Germany

This description may be from another edition of this product. From Stephen E. Ambrose, bestselling author of Band of Brothers and D-Day , the inspiring story of the ordinary men of the U.S. army in northwest Europe from the day after D-Day until the end of the...

I Read it Twice

Published by Suzeaa , 4 months ago
Very readable and chock full of interesting and often heart-breaking stories. Some of them are unforgettable. A great read for any armchair history buff.

Published by Thriftbooks.com User , 21 years ago
No one has been more prolific or entertaining in his efforts to bring the gritty, unit-level personal experiences of the Allied drive from Normandy into Germany to the public's attention than Stephen Ambrose. In his series of books including "D-Day: June 6, 1944: The Climactic Battle of World War Two", "Band Of Brothers", "The Victors", and "Citizen Soldiers", he has masterfully employed a little-known treasure trove of personal interviews with thousands of Allied soldiers to marshal an absolutely absorbing, captivating, and insightful treatise on the nature of combat as experienced by the men and women in the forefront of action as it transpired all along the front. In this volume he concentrates on the drive from Normandy all the way into the heart of Germany, and covering as much ground as the Allies conquered in that fateful year is a considerable accomplishment. This makes for fascinating and entertaining reading. A great deal of ground is covered, from the consolidation of the beachheads in Normandy to the relatively quick liberation of Paris, from the ill-fated Operation Market-Garden assault into Holland in September to the disastrous bloodbath in Omar Bradley's catastrophic excursion into the Hurtigen Forest, from the desperate clashes around Bastogne in the wintry Battle of the Bulge to the long, costly drive that unusually cold and snowy winter into Germany itself. As a result, we don't find the level of detail or strict chronology he employed in "D-Day", for example, or the kind of comprehensive coverage of specific events like the Battle of the Bulge that one finds in books like John Toland's "Battle". This does not mean one doesn't learn a great deal about all these events transpiring during that fateful year; on the contrary, there is much in the way of provocative information and startling perspective offered here on each of these events. Yet it is unfair to expect a book addressing itself to the totality of the Allied campaign to do so comprehensively in less than 500 pages. Certainly anyone reading the corpus of all the Ambrose works on the year 1944-45 as is represented by the books mentioned above gets a very comprehensive feel for the progress of the war effort in Europe. Still, to gain the kind of comprehensive and strictly chronological information a complete history requires, one must look elsewhere, to tomes such as "A World At Arms", or "A War To Be Won", or even the comfortable, veritable, and well-worn "The Rise And Fall Of The Third Reich", my own personal favorite. Mr. Ambrose has become a virtual cottage industry in the World War Two section of your local bookstore, while he has also published works such as his recent best seller on explorers Lewis and Clark. Meanwhile, he has become phenomenally successful because many of his books have captured the public's imagination by being so readable, entertaining, and informative. While popular success doesn't always equate to criti

one of the best history books I have read.

Published by Thriftbooks.com User , 21 years ago
For getting under the skin of the front line soldier and experiencing what it was like, this book takes you there and you come as close as it is possible to feel what they felt. Filled with remembrances and wonderfully researched details this book is filled with the details of actual combat conditions and honours the life of the front line soldier like know other I have ever read. I felt humble, sad and glad, very glad that they were there for us when it counted. Thank you Stephen Ambrose.

Not only a "page turner" but also highly touching.

Published by Thriftbooks.com User , 21 years ago
This book will make you appreciate what all the men who fought in WWII went through. It should be read by every student to see the sacrifices so many have made.

Worthy of All the Praise It Has Garnered

Published by Thriftbooks.com User , 22 years ago
Ambrose is a master of well-documented historical non-fiction. His portrait of foot soldiers in WWII Europe is loaded with details about combat that only those who have been there can know. These details describing the terror, misery, and unexpected aspects of war gleaned from hundreds of interviews of ordinary soldiers give the book a depth and breadth not found in any other WWII account I've ever read. Ambrose artfully entwines these many short firsthand stories around the larger historical narrative of the allied liberation of Western Europe from D-Day to VE-Day. I'm sure this book, because of its faithful portrayal of reality, will appeal to those who were there as well as those who were not. For me it brought to life the adventure as well as the overwhelming fear and hardships that my own father must have lived through as a soldier in Patton's army in North Africa and post D-Day Europe. I imagine the stories he never told would have been much like the hundreds of stories in this outstanding book. I cannot recommend it highly enough, especially when comparing it to Tom Brokaw's "The Greatest Generation." Brokaw's book is interesting and enjoyable but shallow compared to Ambrose's far more thorough account. Both books are good reading, but if I could only choose one of them, "Citizen Soldiers" wins hands down. It will give you an deep and abiding appreciation of what the WWII generation did for our nation and the world at great cost to themselves.

Should be required reading for all military Officers

Published by Thriftbooks.com User , 22 years ago
This book should be on the required reading lists for all Military Officers and for infantrymen of all ages and ranks. I am a serving Infantry Officer and Citizen Soldiers has had a huge impact on my view of the Infantryman's role in World War II. Ambrose has brought his signature style of first-hand oral histories to the plight of the common front-line grunt - and it has resulted in a masterpiece. The book is truly gripping, and will reveal new facets of the ground war in Europe, even to someone who is well read in World War II hisory. I highly recommend this book.
Copyright © 2020 Thriftbooks.com Terms of Use | Privacy Policy | Do Not Sell My Personal Information | Accessibility Statement
ThriftBooks® and the ThriftBooks® logo are registered trademarks of Thrift Books Global, LLC