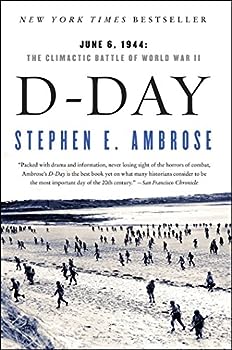 Stephen E. Ambrose's D-Day is the definitive history of World War II's most pivotal battle, a day that changed the course of history. D-Day is the epic story of men at the most demanding moment of... This description may be from another edition of this product.

Published by Thriftbooks.com User , 18 years ago
Great book and filled with personal accounts of D-Day. It does tend to lean toward the American accounts, but Stephen Ambrose is an American historian after all. It is one of the longer books that I've read. My only complaint is that there are only a handful of maps to show the battles. I often became a bit lost in where a particular town or combat zone was located. Mr. Ambrose gives a historian's account of the pre-landing build up and planning on both the Allied and German sides. He also debates the arguments of if the landings were the key defining moment of the war. Also, this book focuses only of the build up and the actual day of June 6th. The majority of the book is about the landings and combat, but it doesn't go into any details of actions after the first day. All-in-all, I highly recommend it especially to anyone wanting to read about it for the first time. Also highly recommend "Band of Brothers" by Stephen Ambrose (five stars!)

Published by Thriftbooks.com User , 18 years ago
I couldn't put this book down. In recent years I have gained an interest in World War II and with Saving Private Ryan and Band of Brothers I had to find out more. Stephen Ambrose went into great detail and helps the reader to understand the size and complexity of such a task. The only negative comment I could have about this book is that is seems to fall short of providing any detailed information or enthusiasm when referring to the landings of the British and Canadians. The landings at both Omaha and Utah were described to the last detail giving the reader a full understanding of how the day unfolded. The landings at Sword, Juno and Gold were left as "They landed and then went inland and made cups of tea". All up a great read and I can't help wondering how blokes as young as 17 could perform with such bravery.

Published by Thriftbooks.com User , 22 years ago
No one has been more prolific or entertaining in his efforts to bring the gritty, unit-level personal experiences of the Allied drive from Normandy into Germany to the public's attention than Stephen Ambrose. In his series of books including "Band Of Brothers", "The Victors", "Citizen Soldiers", and "D-Day: June 6, 1944: The Climactic Battle of World War Two", he has masterfully employed a little-known treasure trove of personal interviews with thousands of Allied soldiers to marshal an absolutely absorbing, captivating, and insightful treatise on the nature of combat as experienced by the men and women in the forefront of action as it transpired all along the front. In this volume he concentrates on the D-Day invasion onto the beachheads along the exposed coast of Normandy on June 6, 1944, in what was the largest and by far the most dangerous sea borne assault since the disastrous Australian failure to establish a beachhead at Gallipoli and the ensuing bloodbath earlier in the century. In a book memorable for its countless personal stories and private adventure in the midst of carnage, chaos, and confusion, of free fire zones where anything that moves dies, Ambrose paints an indelible portrait of the unbelievable madness of war. Following in the famous footsteps of famed author Cornelius Ryan in "The Longest Day", Ambrose uses the amazing and absorbing recollections of the men who fought there to tell the story with poignancy, clarity, and a profound respect for the deeds of so many who fought so valiantly there in service to their countries. This is a story that should be told again and again, so we never forget what it took to take back the beaches, the surrounding countryside, all in preparation for moving on into the interior of France to push the Germans all the way back to Berlin. This was not only the longest day, but also one of the greatest days in history, when hundreds of thousands of Brits, Canadians, Australians, Frenchmen, and Americans strove out of their landing boats to set foot back on Europe, to take back by force of arms the liberty and freedom that had been wrested away from the mainland so cruelly nearly five years before. This, then, is the story of how that crusade to liberate Europe began, of its first shaky steps off the LSTs and boats onto the rocky bloodied shores of France. Mr. Ambrose has become a virtual cottage industry in the World War Two section of your local bookstore, while he has also published works such as his recent best seller on explorers Lewis and Clark. Meanwhile, he has become phenomenally successful because many of his books have captured the public's imagination by being so readable, entertaining, and informative. While popular success doesn't always equate to critical worthiness, in his case it consistently seems to. This is a wonderfully worthwhile, eminently researched, exhaustively documented, and superbly narrated book on the most critical day in

Published by Thriftbooks.com User , 23 years ago
As a Canadian, I would like to say that finally someone has accurately represented the Canadian contribution to the invasion. Ambrose graphically portrayed Omaha beach as a meatgrinder to which Juno Beach was compared. It was a relief to finally see the Canadians given credit due for assaulting a beach whose defences were almost as formidable as Omaha's. Many excerps about Juno that I have read, portrayed Juno Beach as an easy assault and that there were relatively few casualties.Ambrose also brought to light the shortcomings of the Allied force which included it's lack of training for hedgerow fighting. This is a point that has never been explored and I think that the military authorities from all nations represented at Normandy would like us all to believe that the troops going ashore were superbly trained in all facets of combat. This was just not true and I'm glad that Ambrose brought this to light. We tend to forget that after the battle was won, there was still 11 more months of war left in the ETO where inadequately trained men (see Citizen Soldiers) were thrown into battle. Overall an outstanding book. Ambrose represented fairly all major combatants and didn't hold any punches about the realities of war. I have read the book three times (yes, I do enjoy reading it) and each time I am so thankful that my generation has it's freedom because of what those men acccomplished on the beach that morning of June 6, 1944. Thank you Mr. Ambrose.

Picks up where "The Longest Day" left off

Published by Thriftbooks.com User , 23 years ago
Ambrose has truly contributed to the world's knowledge by his work. This book was my introduction to the works of Steven Ambrose, but I have since read almost all of his books still in print. Having read scores of histories of The Second World War, including Cornelius Ryan's classic account of D-Day, I can honestly say that Ambrose's "D-Day" told me quite a bit that I didn't know. And, Dr. Ambrose is a gripping writer; his books are impossible to put down. While all his works are highly readable, this book is perhaps his best to this point, though Citizen Soldiers and Band of Brothers are also outstanding. The real significance of "D-Day" is that it tells us just how brutal the assault at Omaha really was for the men of that generation. No account prior to this has been willing to expose the slaughter of the first waves of assault troops on Omaha. D-Day also tell us the personal stories of some of the average citizen soldiers placed into the horrible crucible of combat. Many times histories focus on strategies, officers, and overall accomplishments. This book gives us a compelling view of the rank and file who did the work of winning the war. Those who survived, and those who didn't, confronted and ultimately conquered what should have been an insurmountable fixed defense; they did their duty in a way that should make us all proud and grateful. Most veterans interviewed by Dr. Ambrose were quite modest about their accomplishments, but their quiet heroics---doing that which human beings find so hard to do---literally saved the world from a terrible tyranny---make no mistake about that! This book offers a compelling account of the price that was paid by average men (our fathers, uncles, and grandfathers), for the freedom we now take for granted.
Trustpilot
Copyright © 2022 Thriftbooks.com Terms of Use | Privacy Policy | Do Not Sell or Share My Personal Information | Accessibility Statement
ThriftBooks® and the ThriftBooks® logo are registered trademarks of Thrift Books Global, LLC