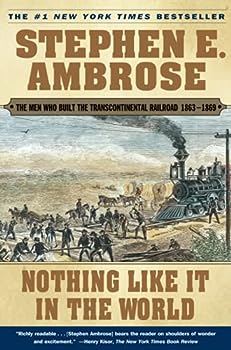 Nothing Like It In the World: The Men Who Built the Transcontinental Railroad 1863-1869

Nothing Like It in the World gives the account of an unprecedented feat of engineering, vision, and courage. It is the story of the men who built the transcontinental railroad--the investors who... This description may be from another edition of this product.

Published by Penta Smith , 3 months ago
This book never made into my house. Book was in very poor condition. Yellow/orange paper. Even smelled bad.

Published by Brian , 1 year ago
I majored in history and if I had turned this in I would have flunked. The book is riddled with mistakes. Frankly, I'm of the opinion that Ambrose didn't even write this. My guess is that he had grad students write it for him and then he put his name on it. Do NOT buy this book.

Published by Mark Ebersole , 3 years ago
The copy I was sent was advertised - Like New: An apparently unread copy in perfect condition. Dust cover is intact; pages are clean and are not marred by notes or folds of any kind. Unfortunately for me, a good portion of the book was highlighted using a yellow highlighter which was so distracting I could not read through portions of the book. I encountered the same issue with one of your competitors. On the plus side the book arrived very quickly.

The Wonders of Working on the Railroad

Published by Thriftbooks.com User , 22 years ago
Is there a more skillful writer of American narrative history practicing today than Stephen Ambrose. Not in my opinion. In this exceptionally fine book, Ambrose tells the story of the greatest engineering feat of the 19th century: the construction of the transcontinental railroad, which connected Omaha, Nebraska to Sacramento, California. The Men Who Built the Transcontinental Railroad (only a couple of female characters figure prominently in Ambrose's story, although many others played important roles behind the scenes), included some of the most famous names in the history of 19th-century politics, business, finance, and industry, as well as tens of thousands of virtually-anonymous workers who provided millions of man-hours of sweat equity in this extraordinary project. This book is especially compelling because, more than anything else, it is a great human drama and some of its passages are as poignant as How Green Was My Valley, Richard Llewellyn's great tale of Welsh coal miners. However, Ambrose is painting on a much larger canvas.We all know how the story will end - the Union Pacific and Central Pacific met at Promontory Summit north of the Great Salt Lake in Utah on May 10, 1869 - but Ambrose's narrative is given an urgency by his effective use of newspaper and magazine accounts of the events which transpired in the 1860s. Ambrose acknowledges that all of his research assistants were members of his family, and they are to be commended. The technical details about the vast quantities of materials purchased and the travails involved in transporting them to where they were needed are fascinating. In addition, this book's many outstanding features includes its collection of photographs. Anyone familiar with Civil War-era photography will recognize the facial types, but I was amazed by photographs depicting engineering and construction marvels: bridges, tunnels, snow sheds, trestles cuts, and a myriad of others. The ability of the surveyors, engineers, construction foremen, and workers to overcome every type of natural obstacle during the course of construction was simply remarkable, and Ambrose's description of building the Central Pacific through the Sierra Nevada mountains is thrilling. Ambrose clearly was impressed by the enormity of the railroad builders' accomplishments, but he occasionally offers some wry humor. The Hell-on-Wheels towns which sprung up around the railroads' tracks were rough places then but sources of some amusement now. And Ambrose makes much of the delightful irony that Leland Stanford was elected governor of California in 1861 in part because he aggressively slandered Chinese immigrants as the "dregs of Asia" and "that degraded race," but, if it had not been for the efforts of thousands of Chinese laborers, the Central Pacific portion of the railroad might never have been finished. (Equivalent numbers of Irish workers performed most of the construction on the

Published by Thriftbooks.com User , 22 years ago
In his new book, "Nothing Like It in The World: The Men Who Built The Transcontinental Railroad 1863-69", Stephen E. Ambrose is following the same process he has followed in his World War II books and his "Undaunted Courage: Meriwether Lewis, Thomas Jefferson, and the Opening of the American West": he tries to bring the reader to see things from many angles: from the top ranks (Financiers, politicians, engineers) to the individual workers. He shows the life of the Chinese workers (West side) and Irish and multinational workers (East Side); describes the life of ordinary people during the construction; shows the danger of using black powder; shows the problems with the Native American populations; analyzes the presence of some 500 African Americans after the Civil War (former Slaves from the South), with at the same time the presence of former Union and Confederate veterans IN THEIR UNIFORMS on the workplace!One of the best passages relates to the last (golden) spike, at Promontory Summit, Utah. The story is breathtaking. The reader expects the final hammering of the spike -like the whole world on May 10, 1869- from San Francisco to New York, Philadelphia, Boston and even London (via the telegraph). I will not say what happened (I do not want to run the climax of the story for the reader!)In conclusion, I would strongly recommend the reading of "Nothing Like it In The World". Stephen E. Ambrose is at his best... and nobody can object with his conclusion that the construction of the Transcontinental Railroad is one of most important event of the American Nineteenth Century!

Again, Ambrose shows his appreciation of the heroic

Published by Thriftbooks.com User , 22 years ago
Ambrose is a historian who often glorifies the heroes of American history and to him, the hero is often the common person. An example of this would be his book Citizen Soldiers. Ambrose has generally written about 20th century US history but a departure was Undaunted Courage, about the Lewis and Clark exploration. Now, again Ambrose departs from the 20th century to produce an engaing work about the completion of the transcontinental railroad. An example of how he plays up the heroic efforts of common people is his discussion of the contribution of Chinese laborers. Dangerous, difficult work, that other laborers would not do were willingly performed by Chinese. They needed little or no supervision in inventing ways to get difficult tasks done in the daunting task of crossig the Sierra Nevadas. Their inventiveness defied the engineers who believed that certain tasks could not be done. Many laborers would take on difficult jobs in crossing the Sierra Nevadas, only to quit after earning a few bucks, moving on to Nevada to try their fortunes in silver mining. However, not only were the Chinese inventive, they stuck to their job despite ill treatment. Of course, they would have been attacked by white prospectors if they had ventured into Nevada to seek their own fortunes. Completing the railroad was a Hurculean task for all involved. The planners and overseers of the project were great heroes for believing it could be done and implementing their beliefs. The laborers, of all ethnic groups, were heroes for taking on a dangerous and rigorous task, and completing it magnificently. For the umpteenth time, Ambrose shows us what's good and insirational about American history.

Published by Thriftbooks.com User , 22 years ago
Ambrose has taken yet another history lesson and made it readable. In his account of one of the most ambitious engineering projects in American history, Ambrose takes us through the fascinating tale of the building of the transcontinental railroad and introduces us to the men who made it happen. The politicians, investors, engineers as well as the Chinese and Irish immigrants and defeated Confederate Soilers who labored for the project all come together in Ambrose's skillful hands as he introduces us to the ordinary and common men who worked together to make their dream come true. The narrative flows freely as the portrait of the key players takes us from the beginnings of a vision to the completed project. A very satisfying read!
Trustpilot
Copyright © 2022 Thriftbooks.com Terms of Use | Privacy Policy | Do Not Sell or Share My Personal Information | Accessibility Statement
ThriftBooks® and the ThriftBooks® logo are registered trademarks of Thrift Books Global, LLC