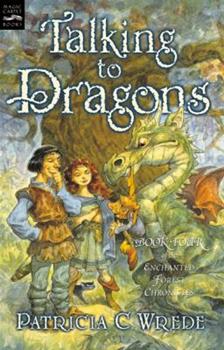 One day, Daystar's mom, Cimorene, hands him a magic sword and kicks him out of the house. Daystar doesn't know what he is supposed to do with the magic sword, but knowing Cimorene, he's sure it must involve a dragon or two!

ARGH! IT'S NOT A SEQUEL!

Published by Thriftbooks.com User , 16 years ago
I CAN'T TAKE IT ANYMORE! I am SO sick of people calling this book "the end of the series," and "the final book." "Talking to Dragons" WAS NOT the final book of the series! Chronologically, yes, it takes place last. But this book was written FIRST! It was meant to be READ first! The other three books were written as prequels BECAUSE this novel was so good and so well-received. If "Talking to Dragons" hadn't been such a great book, the other three books in the series would never have gotten written in the first place. That's why, as some people have said, it works so well as a stand-alone novel --- it's because (gasp!) it originally WAS a stand-alone novel! It wasn't originally INTENDED to be part of a series! Technically speaking, I would actually call this a companion to the Enchanted Forest trilogy, not a sequel. Or rather, the trilogy was a companion to the original novel, giving us a background story to explain what happened with Daystar in this book. THIS IS NOT A SEQUEL!!!

Published by Thriftbooks.com User , 17 years ago
I am a lover of good children's literature, and this certainly fits into that category. I fortunately found THIS book before I realized that it had spawned an entire series. The series consists of this book and three others that choronologically take place BEFORE it, but should be read AFTER it. You will find this book listed at book four, but read it FIRST! It was written first, and it's meant to be read first. Most people, I have found, who read them in chronological order, wind up being less than fond of this book, which I think is COMPLETELY charming and funny; while those who read them in the proper order tend to enjoy all four.Just a helpful suggestion. :-)Wrede is one of my favorite children's writers. Her writing is catchy, she keeps you laughing, and her characters are delightful! She mixes a lot of fairy tales, but adds her own elements.In this particular book, Daystar is on a quest, but we aren't sure of what that quest actually IS until the end of the novel -- even HE is not sure. (Here is where reading the other books comes in -- if you've read them beforehand, there's no doubt as to his quest, and readers end up fairly bored because they know what's coming, and that's not very fun for a reader.)This book catches you from the opening line: "Mother taught me to be polite to dragons." And it only gets better from there. Things catch you off-guard in a very pleasant way.My favorite character would have to be Suz, the lizard, who never fails to make me laugh. He's so delightfully odd!I even like the way Wrede titles her chapters. She's so zany and fun.Start reading these books! You'll be hooked!

Published by Thriftbooks.com User , 19 years ago
"Talking To Dragons," a fantastic, fanciful odyssey with a company of dragons, elves, witches, felines and magicians deserves a fabulous presentation, which is exactly what it is given with this full cast of able players. It's a listener's delight. Billed as the concluding episode in Wrede's acclaimed Enchanted Forest Chronicles, Book Four opens to find King Mendanbar still imprisoned. Queen Cimorene has been living almost in seclusion at the edge of the Enchanted Forest with their son Daystar. Now that Daystar is deemed old enough to rescue his father a multitude of challenges await him. Alone he must traverse the Enchanted Forest with a magic sword, a fire-witch, and a baby dragon. There are many who will challenge him. It's all in the name of good excitement presented with crackling dialogue and imaginative situations. When it comes to fantasy, Wrede knows her magic spells. - Gail Cooke

Published by Thriftbooks.com User , 21 years ago
What? Only five stars? I need more to do this series justice! Patricia C. Wrede writes marvelous fantasy. It's like "Mixed-Up Fairy Tales" or something, but funnier, more engaging, and ripe for repeat reading (After graduating from high school, I read the entire series for the third time in a matter of days). These are timeless tales. Even her NAMES are inventive. Cimorene, Mendanbar, Kazul, Morwen, Telemain, Daystar, Shiara...and let us not forget Zemenar and Antorell. The chapter headings induce chuckles immediately, simply by their existence. She writes in a style that incorporates intelligent fantasy with enjoyable humor. The characters are some you would like to know personally. And nowhere else have I seen as unique a discussion of magic in its many forms as in these four books. I did notice a trend of centralization. Dealing was Cimorene's book. Searching was Mendanbar's. Calling was Morwen's. Talking was Daystar's. I wish the series was not concluded, because I'd love to see Telemain's book. And perhaps Kazul's book could be somewhat of a prequel. Oh, and what about a book from Antorell's perspective? That would make for an incredibly funny story. The Enchanted Forest and its surrounding is a world I want to know about. Not many authors can create an entire world that entices the reader so greatly. But Mrs. Wrede has. Unlike the Douglas Adams' Hitchiker's Guide series, which got progressively worse, each book in the Enchanted Forest Chronicles compares to the original, as fresh and brilliant as ever. Needless to say, this series is one of the best ever. I have not really sampled a lot of the adult fantasy by Piers Anthony and Anne McCaffrey and such, but I doubt they can compare with the Enchanted Forest Chronicles. This is not mindboggling fantasy like the Lord of the Rings trilogy: this is fun. Oh, and remember: ..."Argelfraster."

Published by Thriftbooks.com User , 21 years ago
this book is sooooooooooooooo absorbing it'l have you reading this book in the middle of the night. the child of Cimorene and Mendanbar, Daystar has a quest he doesn't even know what to do. all he has is a sword that mysteriusly tingles whenever he touches it. On the way he meets a bad tempered, but realy funny and likable firewitch named Shiara,a very up-to-date lizard named Suz, a princess that is "waiting for my love to come and rescue me from this horrible beast"( a young harmless dragon that is looking for a princess to become his, well princess, he joins the party too,)" that will come and take me and eat me and ...." well you get the idea.The princess's "love" is realy a suprise and NOT what you would probably think he's like.They meet Morwen, Telemain the magician, Kazul the King of dragons,and the whole gang of wizards being melted from the 1 & 2 & 3 books. Highly recommended to anyone who can read or to anyone who can't read. A millon cheers for the enchanted forest series! YAY,YAY, YAY,YAY, YAY, YAY! BUY EM ALL AND YOU WON REGRET IT!
Copyright © 2020 Thriftbooks.com Terms of Use | Privacy Policy | Do Not Sell My Personal Information | Accessibility Statement
ThriftBooks® and the ThriftBooks® logo are registered trademarks of Thrift Books Global, LLC