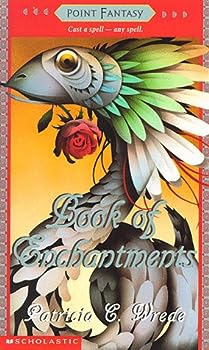 This description may be from another edition of this product. This witty and charming collection of ten short fantasies includes a story, set in the Enchanted Forest, about Queen Cimorene's Frying Pan of Doom; a zany yarn about a magical blue chipmunk with a...

Published by Thriftbooks.com User , 16 years ago
These stories vary a lot in content and feel, but they're all wonderful. Each is well-written, with strong female characters. "Rikiki and the Wizard" is written as a "S'Rian Folk Story", for a book of stories about an imaginary place called Liavek. It begins with a wizard who is very lucky and very famous. But, having fame, he wants it to last forever. So he decides to offer his daughter Ryvenna (beautiful, but more importantly, clever and kind) in marriage to a god. The gods are miffed that he didn't ask her or them, so they agree not to come when he summons them. One god, the blue chipmunk Rikiki, forgets. The wizard can't get Rikiki to fulfill his wish, since the only thing Rikiki is interested in is nuts. He doesn't know what fame is, so he can't bestow it. The wizard rapidly looses patience and tries to get rid of Rikiki, but his third attempt is foiled by Ryvenna. She explains things to Rikiki- but the result (I've told most of the plot, but I won't tell the entirity of this) is more like Midas for the wizard than anything else. Ryvenna, however, prospers. "The Princess, the Cat, and the Unicorn" is about a talking cat, a vain unicorn, and a princess from a country called Oslett where nothing goes the way it does in the usual fairy tales. The fairies don't live close enough put curses on the Princesses, the only giant in the kingdom is nice, and the middle princess, Elyssa, is the one who gets an adventure. No one minds except the king's councelors, who are a pain. That's why Elyssa leaves; unlike in many stories, her family is enthusiastic. Also, she goes on an adventure for the sake of adventure, which very few women in fantasy do. Most of them are either running away or rescuing someone, which is fine, but overmany stories go like that. This one's fun. "Roses by Moonlight" opens with a teenaged girl named Adrian on her driveway smoking to avoid her sister's party. Her mother comes home and on the way in, says, "If you are given a choice, be careful, be wise", and "I never thought there might be other dreams..." A strange woman then appears, taking Adrian into a rose garden that never existed before. Adrian is told that each rose holds a possible future, and if she plucks one, that is what will happen. She smells each flower to see what hte possibilities are. Some are wonderful; some are terrible, like a vision of herself dying because of her smoking. But in all of them, she finds an undercurrent of hate for her sister Sam, who is the kind of person everything goes right for. Adrian finally finds a barely opened rose that shows only a small future: not a vision of a time when she and Sam are on good terms, but a time when they talk about their envy for each other. She nearly picks it, but the memory of what her mother said keeps her from taking it. She ends up deciding to make her own future like everyone else. This is set in roughly modern times. "The Sixty-Two Curses of Caliph Arenschadd" is about a girl called I

Truly a book of enchantment

Published by Thriftbooks.com User , 18 years ago
As one who has never been a big fan of short stories, as well as one that has never read a Patricia Wrede book before in her life, it was some wonder when I found myself picking up this book at the library and reading the blurb, that promised "a black sword of cruel potency, a plumed serpent drawn from stone, a harp made of bone that sings of murder..." I was hooked.Each story is clearly and precisely written, and range from comedy to tragedy, from happily-ever-after fairytales to somewhat fractured traditional tales, and each one is a gem. Usually in anthologies there are a few clunkers, but here each one is original, witty and beautifully written. Whether you are a fan of Patricia Wrede's 'Enchanted Forest' books or not, this collection will delight any age group, and is essential to any fairytale lover. Many stories are excellent for reading aloud, and just as many are perfect for curling up under the covers with a torch late at night. This book has my highest recommendation.To describe each and every story would have me exceeding the word limit on this review, so here are summaries of a few of my favourites, in no particular order-'The Princess, the Cat and the Unicorn' has all the trademarks of what I quickly became familiar with as Wrede's technique for twisting traditional fairytale stereotypes on their head. Princess Elyssa is the middle sister of three, but she isn't jealous of them, her stepmother isn't trying to kill her, and she is perfectly able to out on adventures of her own. The unicorn in this tale is a welcome relief (as well as a parady) to the myraid of stories out there with gushy, sickly-sweet unicorns out there.'Earthwitch' is the darker tale of divided lovers who come together once more - the earthwitch Mariel and the lord Evan Rydingsword who comes to her for help against the troops devastating his land. The tension between them rises, but she agrees to help, calling on the earth itself for power. But the costs of such power is a great one, as the two will soon find out.'The Lorelei' is the German version of the Greek Sirens and said to haunt the Rhine River, luring people to their deaths with her beautiful voice. When Janet and a busload of her mostly unpleasant classmates visit the river they are forced to stay there when their bus breaks down. All seems quiet, but then Janet notices: there seems to be a boy missing...'Stronger than time' is a strange and beautiful story of lost love, and what would of happened if the prince had never come to awaken Sleeping Beauty. The elderly woodsman Arven, still pining over the death of his wife, is surprised one day by the arrival of a young stranger, desparate to get into the abandoned castle before morning. Fill of beautiful language and poignant storytelling, this one's one of my favourites.'The Cruel Sisters' is my favourite overall, strange since it isn't actually a happy ending. Based on an old ballad, this story is lyrical, bittersweet, macabre, and beautifully told. With el

Published by Thriftbooks.com User , 20 years ago
This book is funny and sad at the same time. Some stories like The Frying Pan Of Doom or The sixty-two Curses of Caliph Arenschadd are so funny you can't stop laughing. And some stories like Cruel Sisters are so sad but they are my favorite story in the whole book. Some are right in the middle like Roses by moonlight because this story is so true. All I'm saying is that if you want a good read then this is your book. It is a mix of stories. I've read it about 2,000,000,000 times.

Mystic to hillarious, and everything in between!

Published by Thriftbooks.com User , 21 years ago
This book is filled with lots of fun, but it also really makes you think. One of my favorite stories was "Roses by Moonlight," in which a young girl is taken to a magical rose garden and asked to choose her destiny. It has lots of depth, emotion, and a cool ending! But some of the other tales take a different turn, into the world of magic, and even comedy. Who says a book of short stories can't have everything?Mark Twain (a.k.a. Samuel Clemens) once said, "if I had had the time, they all would have been short stories!" It is very true, short stories are among the most difficult to write, but Patricia C. Wrede definitely pulls it off nicely in her "Book of Enchantments."

Funny, serious, spooky, they're all great!

Published by Thriftbooks.com User , 21 years ago
I have read all the Enchanted Forest chronicles, and I was hoping for more of those stories when I read this. I was not disappointed, this book includes two EF stories. They add a touch of humor, especially the Frying Pan of Doom!. They offset the more serious ones very nicely, like the story about the good and evil swords--Whatsitcalled, Earthwitch, and Roses by Moonlight (doesn't the rose-lady in there remind you of Morwen from EF?) Then, some of the stories in there are, to all practical purposes, just plain spooky, like the story about the enchanted keep and the ghost-prince, Forgotwhatitscalled, and Cruel Sisters. There are also some lighthearted ones that aren't set in EF, like the 62 curses of Caliph Something, and the Rikikki story. That blue chipmunk is just SO CUTE!
Copyright © 2020 Thriftbooks.com Terms of Use | Privacy Policy | Do Not Sell My Personal Information | Accessibility Statement
ThriftBooks® and the ThriftBooks® logo are registered trademarks of Thrift Books Global, LLC