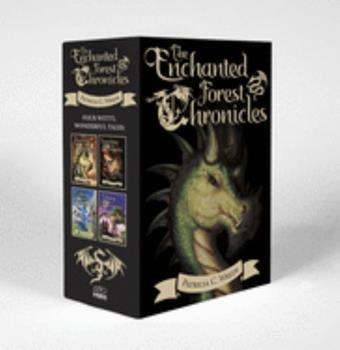 Collected together for the first time are Patricia C. Wrede's hilarious adventure stories about Cimorene, the princess who refuses to be proper. Every one of Cimorene's adventures is included in its paperback edition-- Dealing with Dragons, Searching for Dragons, Calling on Dragons, and Talking to Dragons --in one handsome package that's perfect for gift giving.

Published by Thriftbooks.com User , 12 years ago
This is a book I read multiple times as a young child as well as my sister. It was generally passed from her to me and back again as we each rd to through. It is a book that young children and adults alike can read and appreciate. It is filled with colorful decriptions, beautifully written it captures the imagination in such a way that many authors have not written. In a topic such as witches, wizards, dragons, and fairy tales it can be quite difficult to write a story that in such a way that has not been written about before. The author of the Enchanted Forest Chronicles has accomplished the difficult. I still have not read a book similar to it. I highly recommend this book for anyone. If you have a child third grade or above, especially one that loves to read, I would highly recommend this book. Below third grade readers I would recommend this book as a read together or read from book. A fantastic book well worth the money spent to acquire it. Warning: This book is a page turner and you may very well likely find yourself having to buy more than one copy as it is such a good book it is easy to read until it falls apart.

4.5, actually, for a set of cute stories

Published by Thriftbooks.com User , 14 years ago
I originally bought each of these books individually, and it was quite a pain finding all of them. This is a convenient way to purchase these very cute, very fun fantasy stories. The first book, "Dealing with Dragons", is a very witty, very cute book about the improper princess who decides to live with dragons rather than get married to someone she doesn't even like. Cimorene becomes the dragon Kazul's "princess", doing her chores for her, cleaning out her library, and cooking for her. The story has a lot to do with the relationships between wizards and dragons and in a sense, everything mocks the "real" view. Throughout this book, Wrede is practically laughing at every fairy tale ever written, and it is hilarious. Book two, "Searching for Dragons", introduces a new character. Mendanbar, King of the Enchanted Forest, needs to go talk to the dragon king (and there's a new one from the last book!). Unfortunately, the dragon king has been kidnapped, so he and Cimorene go looking for her. It's more action filled than its predecessor and has a lot more magic going on. "Calling on Dragons" is clearly the weakest book in the bunch, though it's. It's least memorable of them all, its new characters are the most boring, and the plot is more of a preview for the final book, "Talking to Dragons". And speaking of, "Talking to Dragons" once again brings us the fun and excitement the first two books brought. While each of the other books had a gap of time that stretch across a year or so, the gap between COD and TTD is much bigger... Sixteen years! We've got a whole new generation of characters, whether its the cats, the fiery girls, or our (!) narrarator! Yes, TTD is written in first person, which is a first in this series. We truly get into Daystar's head, which is fun and enjoyable. In a sense, TTD continues where COD left off, but obviously much later, and many things have changed. So if you like rather mocking fantasy stories that are both fun and cute, you'll love this. If you love witches, evil wizards, cool dragons, and awesome characters, than this is a great set to pick up. Just remember that COD is more of a transition book and all will be well. So go join Cimorene, Mendanbar, Kazul, Daystar, Morwen, the cats, those evil wizards, and the lot by buying this great set!

Published by Thriftbooks.com User , 17 years ago
The Enchanted Forest Chronicles are an amaizing collection of fun and witty fantasy books. Written mostly from the third person point-of-view, they tell of a wonderful, exciting world which you just can't get enough of! The first , Dealing with Dragons, follows the spunky, strong-willed, yet lovable Princess Cimorene on her journy to get away from her dreadfully normall kingdom and embark on an adventure, in wich she befriends dragons, meets witches, and melts some wizards. I thoughroly enjoyed this book! But be warned: after you pick up this one, you simply MUST read the others as well! The second book, Searching for Dragons, focuses on Mendanbar, king of the enchanted forest, as he meets up with the same great characters from Dealing with Dragons and many equally great new characters on his journeys to save the enchanted forest. An amaizing tale, it's hard to see how Wrede was able to match the greatness of the first one, but yet she does, with great skill! The third book, Calling on Dragons, is more centered around the witch, Morwen, as she teams up with dragons, donkey-rabbits, firewitches, and many other fun characters to rescue the King's magic sword from meddling wizards. Again, Wrede dazzles us with her ability to keep the story alive and exciting. The fourth, and final, book in the series, Talking to Dragons, follows Cimorene's son, Daystar, on his quest to return order to the enchanted forest. Although he doesn't even know it, but it seems that everyone else does!! along the way he meets a young dragon and a hot-headed fire witch, who aid in his quest. Although my least favorite in the series (this book is told in the 1st person point-of-view) Wrede doesn't fail to give her readers a fun and captivating story! I highly reccommend this set! not just for the younger audience, but adults as well; I am fifteen, and LOVED them, and my Aunt (who is quite a few years my senior) enjoyed them as well. These books will make you wish you too could share in the fantastic world of the enchanted fores chronicles. I would give these books a ten if I could!!

Before Harry Potter, there was Cimorene.

Published by Thriftbooks.com User , 18 years ago
I love this series.I first encountered these books in sixth grade, when my teacher began to read Dealing with Dragons to my class. She never finished it, and I forget why I began to read it, but after I had finished it, I loved it. For a long time, I didn't even know that it was part of a series. I read and reread the book so many times that the paperback spine broke, and I had to finally replace it. When I did replace it, I bought the entire series.I always tell people that this is a great series for young adults who like fantasy, and that the first book (Dealing with Dragons) can stand alone pretty well. It is a series that uses common tropes from fairy tales and fantasy myths, but satirizes and mocks them. For example, in Dealing with Dragons, Cimorene (the very IMPROPER princess) meets a talking frog... but one that she doesn't need to kiss, although he offhandedly remarks that he's met a couple enchanted frogs in the past. :)The second book, Searching for Dragons, is a continuation to Dealing with Dragons, but it introduces a new character, Mendenbar, the ruler of the Enchanted Forest (and we discover why the series is called The Enchanted Forest Chronicles) and revisits some of the older characters. Calling on Dragons, which is one of my favorites in the series, focuses on the witch Morwen-- it is the silliest of all of them, in my opinion, mostly because of Morwen's cats. Finally, Talking to Dragons, which is my least favorite of the series, ties up some of the loose ends. Unfortunately, this final book takes place one generation from the lovable Mendenbar and Cimorene, and it is kind of disconcerning to lose them but keep Wrede's wit. But, the series is fun, the characters are (for the most part) wonderful and unforgettable, and it is a very creative (but underrated) fantasy series that I strongly recommend.

Fantasy at its best!

Published by Thriftbooks.com User , 18 years ago
Cimorene may be a bit unconventional as a princess, she's practical and independent, she uses her head. She voluntarily becomes the personal assistant to a dragon. In the first book she has to deal with would-be resucers who won't take 'no' for an answer, and medeling wizards.I really can't tell you what happens in the following books without ruining it for you. Whether your buying these books for your child or for yourself, you won't be disapointed. Also, don't be afraid to get this for a younger child who reads at a higher level, there isn't anything questionable in these books as far as maturity content. It's simply young-adult fiction because it has the power to hold older readers imaginations as well as young readers.
Copyright © 2020 Thriftbooks.com Terms of Use | Privacy Policy | Do Not Sell My Personal Information | Accessibility Statement
ThriftBooks® and the ThriftBooks® logo are registered trademarks of Thrift Books Global, LLC