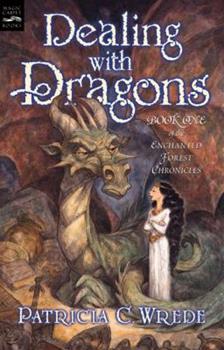 Cimorene is everything a princess is not supposed to be: headstrong, tomboyish, smart. . . . And bored. So bored that she runs away to live with a dragon . . . and finds the family and excitement she's been looking for.

Dealing with Dragons is a great book

Published by Thriftbooks.com User , 4 years ago
This book may be for children, but you never get to old. It is great to have a fantastic read with a talented writer. I will read this book to my grandchildren and make it a family tradition. I read this when I was thirteen years of age and now being older, I will reread it again and again. Bravo, Patricia C. Wrede for having an astounding imagination.

This was a very cute book.

Published by Stephanie Heaton , 5 years ago
If you are looking for an adventure style book then this is one for you. The follows our main character Princess Cimorene who doesn't like being a princess. She refuses to be a proper princess and ends up running away from home. That is when the story takes a twist. It was full of humor and adventure. Love this book!!!

A Delightful Work of Fantasy

Published by Thriftbooks.com User , 20 years ago
This is a delightful little book of fantasy. I think all of us like to escape from time to time to a world such as that of the Enchanted Forest and the Mountains of Morning. Although this world is inhabited by dragons and bothersome wizards, it is still an airy, light-filled world that captivates the imagination. Cimorene is a princess who has no interest in learning the things a princess is supposed to learn; she would rather learn fencing, magic, cooking, and other things forbidden by her parents. Her parents finally give up on changing her ways of thinking and decide to marry her off to the prince of a neighboring realm. Rather than submit to this unwanted fate, she takes the advice of a friendly frog and volunteers to serve as a dragon's princess. The dragon Kazul accepts her offer, and Cimorene goes to work organizing Kazul's treasure rooms, cataloguing the scrolls in her library, and making cherries jubilee and other foods for her. Several princes, including her betrothed, come calling to rescue her, and she has to continually explain to them that she does not want to be rescued. Cimorene comes to discover a plot between the Wizard Society and one turncoat dragon, and it is largely up to her and the princess Alianora, working in conjunction with Kazul, the witch Morwen, and a stone prince to sort out the plan and goals of this dastardly plot and prevent the dragons from granting kingship to the traitor. Even when things are hairy, Cimorene keeps her wits about her, foiling much of the action with her own extraordinary determination. Apparently Wrede's Enchanted Forest chronicles are considered young adult literature. I did not know this when I began reading the story, and I certainly would urge other adults not to let this fact rob them of the opportunity to enter this wonderful realm of fantasy. The writing is witty, the plot is well-thought out, and the action moves along well with no dead spots or literary pot-holes. A few allusions to traditional fairy tales are interspersed in the story, lending a good bit of fun and charm to the book. Younger readers will find this book enjoyable, and Cimorene seems to me to be a pretty good role model for young women given her forthright nature, zest for learning, and discontent with the life others tell her she is supposed to lead. I look forward to reading the other books in this series.

Published by Thriftbooks.com User , 22 years ago
This is a great book that I think anyone who could should read it, because the way the author expresses the character of Cimorene. She has shown the main character as a tomboy who doesn't and is tired of the thing they do in the royal family.Princess Cimorene finds embroidery, etiquette, and being a princess boring, so she runs away and becomes a dragon's princess. She loves her new job, which allows her to practice her Latin, magic, fencing, and cooking skills, all far more interesting than etiquette, but sadly neglected by her tutors at the palace. Her intelligence and common sense soon make her an indispensable advisor to her dragon, Kazul. (Cimorene would be cross with me for calling Kazul her dragon, actually Cimorene is Kazul's princess. Convenience necessitates the shocking error.) Cimorene is never more indispensable than when she discovers a dastardly plot by the Society of Wizards to take over the dragons' kingdom in the Mountains of Morning. Princess Cimorene and Kazul are both intelligent, strong willed heroines, and great role models for kids of both sexes. There's also a fun supporting cast, including the no-nonsense witch Morwen, the shy Princess Alianora, who comes into her own with Cimorene's help, the rather grandfatherly old dragon Roxim and his allergies, the stone prince, and lots of dragons, wizards, and cats. But the aspect of Dealing with Dragons (and the others in the series) that I enjoy most is not the exciting plot or the characters, but the humor. The novel is packed with sly references to popular fairy tales, slightly skewed so that the novel is at times an enjoyable parody of the fairy tale genre. ("So Aunt Ermintrude told Mama to put me and a spinning wheel in a room full of straw and have me spin it into gold," Alianora went on, "And I tried! But all I could manage was linen thread, and whoever heard of a princess who can spin straw into linen thread?") This is lighthearted and enjoyable fantasy for kids 10 and up (or younger, if read aloud.)

Published by Thriftbooks.com User , 22 years ago
The start of four wonderful books, Dealing With Dragons is a light, funny fantasy classic.Princess Cimorene is not allowed to use swords, spoons, or magic-it's simply not done by princesses! Irritated, she takes advice from a magic frog and runs away, and is quickly adopted as the personal princess and housekeeper for a dragon, Kazul. In doing so, she discovers and explores an interesting and sometimes hilarious new culture, and is enmeshed in a conspiracy.Forget ages of foreshadowing-this book goes straight to the point, where Cimorene wants to leave. It skips along at a brisk pace with lots of funniness, such as Cimorene reasoning with a homicidal genie and trying to shrug off her various knights and suitors, who want to rescue her whether she likes it or not.It spoofs the various damsel-in-distress stories by making the princess WANT to live with the dragons, and telling her wannabe boyfriend to go away and rescue some other princess. The tea party with the four "trapped" princesses, two proper and two ordinary, is a riot. The wizards and dragons manage to be endearing and funny without even needing much character development.And Morwen is one of the most magical witches since... well, she's as unique as Gandalf! You'll fall in love with this book and the three sequels, I promise!

Published by Thriftbooks.com User , 22 years ago
I was looking at the interview with J.K. Rowling when I saw the sign 'What to Read After Harry Potter.' I immediately clicked on, eager to see what was recommended. And I saw this fantastic book. I began my journey into the kingdom of Linderwall last year. I gleefully followed Cimorene on her adventures as the Kazul's (a dragon's!) princess, and couldn't WAIT for more. But no matter how many book stores I looked in I couldn't find the rest of the series. So imagine my delight when I looked here. Dealing With Dragons is an incredible read. It has everything a book needs: excitement, adventure, a touch of romance, and a highly believable main character. Who can honestly say that they haven't felt the way Cimorene does: sick and tired of their life, in her case a boring life of a princess, with nothing better to do then 'lady-like activities'. So the princess sets out to stop being a princess, with a great outcome. Turning away princes who come save her? As if she needs saving! It's a wonderful twist on the fairy tales of weak princesses being captured by vicious dragons, and being saved by the big strong princes. Cimorene volunteers to be a dragon's princess; if anyone needs saving it's those princes who come to 'rescue' her. I definitely recommend this book to anyone and everyone. And the last thing I say is, "ENJOY!"

Published by Thriftbooks.com User , 23 years ago
My wife and I both read the book twice! We just finished reading it to my 7 year old daughter and 3 year old son. They both loved it and were able to follow the plot. It was writen for children, but was also entertaining for adults. We recommend this as a good introduction to fantasy reading.
Trustpilot
Copyright © 2022 Thriftbooks.com Terms of Use | Privacy Policy | Do Not Sell or Share My Personal Information | Accessibility Statement
ThriftBooks® and the ThriftBooks® logo are registered trademarks of Thrift Books Global, LLC