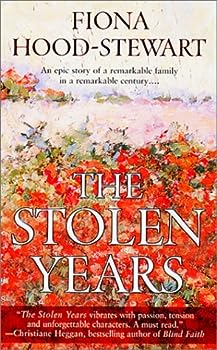 This description may be from another edition of this product. Spanning three generations and a century of love, loss and longing, 'The Stolen Years' is a stunning tale of secrets and betrayals, of an empire forged from the seeds of revenge, and the legacy that...

You wont be able to put this book down

Published by Thriftbooks.com User , 18 years ago
This is one of the best books I have read in a long time. Ms. Hood-Stewart took us from 1917 to 1998 without feeling rushed.There is so much detail that you feel like you are fighting in the war along with the characters. When you are finished with the book you will feel like the characters are part of your family you care so much about them.

Published by Thriftbooks.com User , 19 years ago
Ms. Hood-Stewart, in only her second book, has written a story on par with Belva Plain and Barbara Taylor Bradford. Her talent in weaving a story is exceptional.The book begins in World War I and goes up to present day. It revolves around the lives of twin brothers Gavin and Angus MacLeod and Angus's wife Flora.Gavin believes he has been betrayed by Angus and Flora, who in turn think Gavin has been killed by a German barrage. At the end of the War Gavin comes to America where he begins building a new life under a new name, with plans for revenge against Angus. Ms. Hood-Stewart takes us on a fabulous journey interwining the lives of Gavin, his family and friends, Angus and Flora and their family, plus an array of remarkable, vivid characters. Its exciting, sensual, witty and Gavin is dangerously alluring.Ms. Hood-Stewart is the cause of my sleepless night. I started reading The Stolen Years and couldn't put it down. I didn't want it to end. I highly recommend this book. Just make sure if you start reading it in the evening, you don't have to be up early the next morning.

Published by Thriftbooks.com User , 20 years ago
In 1917, fraternal twins Angus and Gavin MacLeod fight side by side in the trenches in France when a German grenade strikes their foxhole. A badly wounded Gavin turns to Angus for comfort, but his brother stands frozen a mindless victim of battle fatigue syndrome. Angus is transferred to a medac facility where he meets his brother's fiancé Flora Finley, a nurse. A guilt-stricken Angus informs Flora that Gavin died on the battlefield. Not long afterward, Angus returns to Scotland to inform his family of his twin's death. Angus and Flora marry, but unbeknownst to both Gavin survives his ordeal, loathing his brother for failing. Gavin goes to America without informing anyone he lives. In the 1930's, a wealthy Gavin works to undermine Hitler. However, revenge towards his sibling still eats at his soul. When he sees Flora for the first in years, Gavin knows he still loves her. He also worries that she or his family will recognize him though two decades have passed since everyone believed he died and compromise his mission. THE STOLEN YEARS is a deep historical relationship drama that hooks the audience from the start due to the divergent personalities of the MacLeod twins. Though the novel spans most of the twentieth century and ends in the nineties, the tale mostly takes place from World War I to World War II with Gavin being the prime focus. The story line is character-driven, but contains action to keep most readers satisfied. A relatively newcomer, Fiona Hood-Stewart provides a strong soul searching novel.Harriet Klausner
Copyright © 2020 Thriftbooks.com Terms of Use | Privacy Policy | Do Not Sell My Personal Information | Accessibility Statement
ThriftBooks® and the ThriftBooks® logo are registered trademarks of Thrift Books Global, LLC