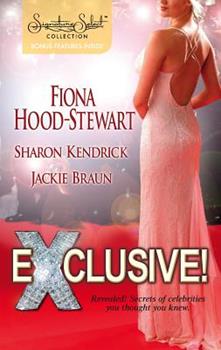 Published by Thriftbooks.com User , 16 years ago
"Hollywood Life or Royal Wife?" by Fiona Hood-Stewart. Hollywood actress Victoria Woodward hates the inane questions from the media and the need to perform though not filming a movie all because her latest picture is showing at the Cannes Film Festival; meds are the only reason she keeps her sanity. When she meets Prince Rodolfo of Malvarina, a Mediterranean principality near Italy, he takes her to his home to escape a scandal that centers on her. As Victoria falls in love, she concludes there is no Hollywood ending for her as he Rodolfo must marry a royal. "Marriage Scandal, Showbiz Baby!" by Sharon Kendrick. They had been Hollywood's most famous couple, but six months ago Jennifer Warren and Matteo D'Arezzo separated as he was unfaithful. Both are in Cannes for their last movie together, but both see themselves heat up the silver screen and fall back into each other's arms though neither assumes it will last beyond the festival. However, neither expected a matchmaker to come along to try to unite this couple in love. "Sex, Lies and a Security Tape" by Jackie Braun. Former film star Colin McKinnon attends Cannes knowing he must avoid scandal if he is to throw his hat into the political arena as other Hollywood types have successfully done. So why does he find he needs to be with the paparazzo's poster girl wild out of control Tempest Herriman. Worse he has been caught on tape making love with this female storm, who every time he sees her makes him forget his ambitions behind a haze of desire for her. Fans of Jackie Collins' Hollywood novels will appreciate these three heated contemporary romances in which readers obtain an insider look at the Cannes Film Festival as a bonus. Harriet Klausner
Copyright © 2020 Thriftbooks.com Terms of Use | Privacy Policy | Do Not Sell My Personal Information | Accessibility Statement
ThriftBooks® and the ThriftBooks® logo are registered trademarks of Thrift Books Global, LLC