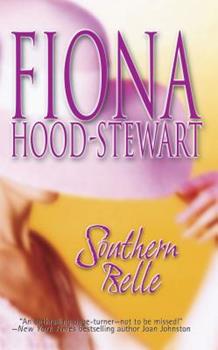 Southern Belle by Fiona Hood-Stewart released on Apr 23, 2004 is available now for purchase.

Published by Thriftbooks.com User , 17 years ago
In Savannah, thirty-four years old Elm MacBride is hurt when she realized that her husband Harlan, a two time Congressman with higher ambitions, had a mistress, her high school nemesis Jennifer Ball. Distraught, Elm visits her friend attorney Meredith Hunter who admits she knew of the affair, but insists that Elm placed Harlan on a pedestal as being Mr. Perfect. Elm decides to obtain a divorce while fleeing for Giocanda Mancini's chalet in Gstaad, Switzerland during his House re-election campaign built on family values.Thoroughbred horse breeder Viscount Johnny Graney comes to Gstaad because his mother insisted on a family vacation. Johnny, a widow with a teenage child, and Elm meet. Both are shocked by an instant attraction as Johnny has not found any woman appealing since his wife died and Elm had always believed that Harlan was Mr. Right. However, as they fall in love, Harlan with his Lady Macbeth like ambitions will do anything conceivable including becoming a widower to insure his wife will not remain his only liability to becoming re-elected.Though it is difficult on the surface to accept how far Harlan (he is too amoral for his wife and her father not to grasp his real nature) will go to insure another term, Fiona Hood-Stewart makes him seem very realistic. The story line starts as a character study predominantly looking close into the heroine as she evolves from her self-indulged cocoon. Ultimately the tale switches gear into an intrigue as nothing will stop Harlan from his objectives. The romance between Johnny and Elm underscore the plot transformation that readers will enjoy.Harriet Klausner
Copyright © 2020 Thriftbooks.com Terms of Use | Privacy Policy | Do Not Sell My Personal Information | Accessibility Statement
ThriftBooks® and the ThriftBooks® logo are registered trademarks of Thrift Books Global, LLC