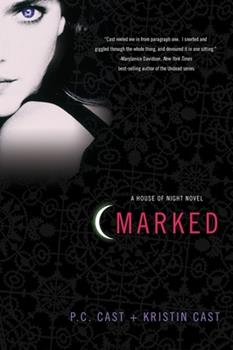 (Book #1 in the House of Night Series)

Enter the dark, magical world of the House of Night series by bestselling authors P.C. Cast and Kristin Cast, a world very much like our own, except here vampyres have always existed. One minute, sixteen-year-old Zoey Redbird is a normal teenager dealing with everyday high school stress: her cute boyfriend Heath, the school's star quarterback who suddenly seems more interested in partying than playing ball; her nosy frenemy Kayla, who's way too concerned...

Love the book but not condition of the book

Published by OneHotMama , 1 year ago
I read the first 5 books in this series as a teenager and really liked them so I decided to go back read them again. These are definitely written for a younger crowd, I don't care for the writing style and feel the author tried too hard to capture the teen psyche. With that being said, I am on book 7 now and noticed a significant improvement in the writing in book 6. I will finish the series and hope they continue to improve.

Published by Andy , 1 year ago
The story is wonderful and keeps you hanging on every word. Though the story line is great I do wish it was worded differently. It's without a doubt written for teenagers.

Published by The Librarian , 1 year ago
In high school, I began this series and I only made it through two of the twelve books. Finally, as a young adult, I came back to it looking for love, action, vampires and just a fun world. I found it all in this book. I have(as of right now) finished books 1 thru 9 and I am about to begin the 10th book. The story line is easy enough to follow(and the author does give small recaps here and there for a reader!) and I think I loved every character but one so far! The grammar is a little bit of a rough point, but it is telling the story of a 16 year old girl and it was written in 2007, so if you can get passed that, it's an excellent read and one that I will probably pick up again in the future! ADDING TO: 10/17/2020 I finished reading all 12 books and I am currently reading the HoN Novellas. What can I say for these books? There's more romance, adventure and friendship than I even thought when writing my first review. The last book is a phenomenal ending to a wonderful story(although I just picked up the HoN Otherworld books and I am so excited for those!!) and I wasn't disappointed in a single thing about these books other than the fact that I'm almost out of them to read! P.C. Cast and her daughter created a beautiful world that I would love a chance to fully explore. The characters are relatable and fun, the world is interesting and so spiritual and I enjoyed getting to know each character in depth and getting to see them blossom into exactly what Nyx had in store for them. If you like funny, heart warming, crazy adventures, You will not be disappointed in this series at all!

Published by Jax Soder , 2 years ago
Enter the world of vampires through the eyes of a teenager. Love, Mystery, Vampires, Action.

Published by Nicole M. , 3 years ago
It keeps hanging on. It's a real page turner. You will not want to put it down.

Published by Thriftbooks.com User , 4 years ago
It is very much a YA book. The story was good but the grammar bothered me a bit. It is based on a 16 year old life though and you definitely can tell. But I did like it enough to purchase the next one.

Published by Thriftbooks.com User , 6 years ago
I became hooked to the series in 2008. Since then, this entire series has impacted my life greatly. The flow of the story is great, the characters are both relate-able (to yourself or your friends), and the story is interesting enough to keep you completely immersed to a point where you started reading at 6 in the evening, and now its 4 in the morning and you've completely finished the book. Zoey Redbird is an amazing, strong, funny, and real character, and her friend she makes once she becomes Marked are equally fantastic. Great start to an even greater series.

Published by Thriftbooks.com User , 14 years ago
When Zoey Redbird is Marked by a Vampyre Tracker, her entire life will change. Not only will she be forced to move to the House of Night to start her Vampyre training, but she will also have to go through the change. The only other option to going through the change is to die. Her new life at The House of Night is different and strange... even for a Vampyre. Her Mark is completely filled in, while a normal fledgling's Mark is usually not so obvious and bright. This novel completely captivated me. From the very beginning, I could not put it down. It was interesting and sexy and intriguing and mysterious... the perfect vampyre novel. I could not put this book down, and I can honestly say that I cannot wait to read the second and third... this is a must-read for everyone!

Published by Thriftbooks.com User , 14 years ago
MARKED P.C. CAST AND KRISTIN CAST Rating: 5 Enchantments Sixteen year old Zoey Redbird is just like any other typical teenager, worrying over the geometry test she has to take tomorrow-that is, until she's marked by a tracker and her entire world changes. Everyone knows what happens next, Zoey needs to go to the House of Night, the vampire finishing school to complete the change or else she could die without ever having the chance to complete the change. MARKED is unlike any paranormal I've ever read. P.C Cast and Kristin Cast create an intriguing paranormal world in which to set the House of Night series. There are stages to becoming a full fledged adult vampire, and at any point in time, a fledgling's body can reject the change, as Zoey soon learns, perhaps a nice foreshadowing of things to come? Zoey isn't your average vampire fledgling. Her mark is colored in almost immediately, which makes her somewhat of a freak at House of Night and an easy target for the bitchier brigade, led by Aphrodite, the head of the Dark Daughters and Sons, a selective group of students at the House of Night. Zoey would be happy to stay far away from Aphrodite and her cohorts, only her mentor, the High Priestess Neferet encourages her to join the Dark Daughters. As Zoey can't say no to her new mentor, she finds herself at the ritual. And when things later get out of control, it may be Zoey is the only one who can right things, much to the chagrin of her nemesis. I was hooked from page one into this amazing book. From Zoey's indifferent parents (I literally cheered when she snuck out of the house to get away from them) to Nyx, the goddess, the story is populated with amazing characters who come alive within the pages of MARKED. MARKED is the first book in the House of Night series. [...] Lisa Enchanting Reviews May 2008

Published by Thriftbooks.com User , 15 years ago
This mom & daughter team is a winning combination! P.C. and Kristin Cast had me spellbound from the first chapter. I've read lots of vampire fiction, lots of Young Adult fiction, lots of supernatural fiction...NOTHING compares to "Marked." The characters are 3 dimentional and the story is totally new. A finishing school for vampires! Who would have thought?!? The heroine is strong, and yet "human." The secondary characters are unique and don't fit the stereotypical mold. I am completely in love. The only problem I have is that the next book isn't released yet! Read this book-- you won't be sorry.

Published by Thriftbooks.com User , 15 years ago
Zoey Redbird's world is very much like our own, except that vampyres have always existed. Zoey is sixteen-years-old and having a typical day in school when she notices a Tracker standing beside her locker. Never really believing the Tracker is hunting for her, Zoey is genuinely shocked when the Tracker Marked her a fledgling vampyre. This means a crescent moon scar appears on Zoey's forehead and she has less than a day to reach the House of Night, a private boarding school for fledgling vampyres. Zoey's mother is no help. Her step-father all but hates her. Zoey goes to her Cherokee grandmother for help, but gets hurt along the way. While unconscious, Zoey has a vision from Nyx, the Vampire Goddess, who informs Zoey that she is very special and has been chosen to be the eyes and ears of Nyx. When Zoey awakens, she is with her grandmother at the House of Night. Neferet is the High Priestess of the House of Night, as well as her new Mentor. Unlike before the vision, Zoey's crescent moon mark is now filled in. This is unheard of before going through The Change. Zoey soon learns that she has some amazing powers, yet no understanding of how to use them. Zoey is not the only fledgling in school with special powers. Aphrodite is the leader of the Dark Daughters. She is in training to be a High Priestess; and Zoey has made Aphrodite's black list without even trying. Zoey must look deep within herself for the courage she needs to fulfill her destiny - with a little help from her new vampyre friends. ***** A solid foundation for a new supernatural series! It seems to target older teens, but adults will find themselves drawn to it as well. It looks as though the writing talent is a gene that runs strong in the Cast family tree. Terrific plot with well formed characters. I look forward to the next release of the Cast Duo. ***** Reviewed by Detra Fitch of Huntress Reviews.

Great YA read for adults as well!

Published by Thriftbooks.com User , 15 years ago
Zoey Redbird's life changes forever the day she is MARKED. Once being tagged by a vampyre tracker, she can no longer remain in her home but instead has to move to the House of Night. However, Zoey finds out very quickly that her mark is different from that of the other vampyre fledglings. The Goddess Nyx has special plans for Zoey.... Do not start reading MARKED late at night as I guarantee you will not get any sleep until you finish this book! P.C. Cast and Kristin Cast have written a tale that is a hit from the very first sentence. Not only is MARKED an engaging story, but the fresh perspective on vampyres makes this one of the best vampyre tales I've ever read. MARKED is targeted for the young adult audience. However, adults are absolutely going to love this one as well! One word of caution, however. Some of the themes may be a bit too extreme for younger teenagers as Zoey very openly discusses certain sexual acts and drinking blood. However, older teenagers will appreciate Zoey's attitude while parents will appreciate the integrity of Zoey's character. In fact, P.C. Cast and Kristin Cast are to be commended for the phenomenal job they did with creating Zoey's character as her voice sounds loud and clear throughout this superb story. MARKED is a must buy for all fans of vampyre tales. P.C. Cast already has a reputation for crafting quality stories and her first effort with her daughter may be her best yet. MARKED is easily recommended! COURTESY OF CK2S KWIPS AND KRITIQUES
Trustpilot
Copyright © 2022 Thriftbooks.com Terms of Use | Privacy Policy | Do Not Sell or Share My Personal Information | Accessibility Statement
ThriftBooks® and the ThriftBooks® logo are registered trademarks of Thrift Books Global, LLC