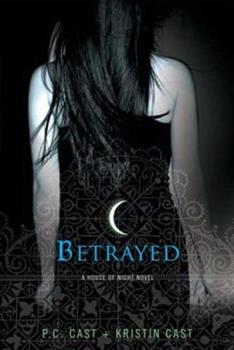 (Book #2 in the House of Night Series)

by P.C. Cast and Kristin Cast

Betrayed, the second installment in the bestselling House of Night series from P. C. Cast and Kristin Cast, is dark and sexy, and as thrilling as it is utterly shocking. Fledgling vampyre Zoey Redbird has managed to settle in at the House of Night. She's come to terms with the vast powers the vampyre goddess, Nyx, has given her, and is getting a handle on being the new Leader of the Dark Daughters. Best of all, Zoey finally feels like she belongs--like...

Better than the 1st

Published by KD , 1 year ago
The first several chapters is pretty much a recap of the first book but about halfway through it really picks up. The character development is much better than the 1st book, there is a lot of action and twists in this book that I enjoyed. I even cried reading

A Series to Remember

Published by Andy , 1 year ago
What a way to continue! The story line is so good, it just keeps you guessing.

Published by Nicole M. , 3 years ago
Again P. C. and Kristen have got me hooked into the house of night series, with it only being number 2 in the series. They keep you hooked and not wanting to put it down.

Published by Thriftbooks.com User , 4 years ago
I am obsessed with this series. The editing could be a little better but since it is in the eyes of a 16 year old it doesn’t bother me much. Sometimes the book is a little predictable but other parts I just can’t wait to see what happens next. I finished it in one day.

Published by Thriftbooks.com User , 6 years ago
This entire series is amazing and I love it. Iv reread the entire series at least five times. Die hard fan for ever <3

Published by Thriftbooks.com User , 13 years ago
Great book! I could not put it down. Lots of excitement and thrills from beginning the end. I definitely recommend it to all avid Betrayed fans!

Published by Thriftbooks.com User , 13 years ago
I blazed through this series. I really liked the author's sytle of writing. It kept me interested every step of the way.

Published by Thriftbooks.com User , 14 years ago
In the popular teenage vampire genre the House of Night series stands out. The main character is strong, and rolls with the punches. She doesn't back down, and she doesn't think she's underserving of all good forture (which I like most). If you're going to read a teenage vamp novel, THIS is the series.

As Excellent as the First!

Published by Thriftbooks.com User , 14 years ago
In our second story, Zoey Redbird has become more than just "special" - she's been gifted with paranormal powers by the Vampyre's goddess, Nyx and has a unique mark that no other fledgling has (a fledgling is the stage before becoming a Vampyre. It is hard on all fledglings and many die in the process known as the "change". A mark is a moon-shaped figure that appears on teenagers foreheads when they are turned into a fledgling.) Zoey's life grows more complicated at the House of Night (a Vampyre finishing school) while she juggles three different boys, all of whom she is deeply attracted to, trying to cure her constant desire for blood (something that a fledgling at her age is NOT supposed to have!), leading the schools "club" called the dark daughters she is definetly in over her head! But something else is happening to her and the House of Night - fledgling are dying and Zoey has been seeing them! And there's something else: Who can Zoey REALLY trust? This is an excellent sequal to the first book "Marked". I have an educated guess that if you try out this book you will enjoy it so please give it a try!

Published by Thriftbooks.com User , 15 years ago
Zoey Redbird is the most powerful vampyre fledgling the House of Night has ever seen. In fact, as far as anyone knows Zoey is the most powerful fledgling in vampyre history. She has been touched by Nyx(The Goddess of Night.) It's clear by Zoey's accelerated rate of change and ever growing abilities that she is meant for somthing profound. But for all that Z still has to go through all the growing pains that come with being a teenager. She's got boys coming out of the would work. There's her almost ex boyfriend Heath, who she's imprinted with and who's blood she craves, Zoey's Vampyre Superman, upper classman Eric Night(yep that's really his name.) And to help complicate matters, Zoey seems to be conecting on a very personal level with part time tacher and poet Loren Blake who is as amazing as he is forbidden. Whats a girl to do? Zoey has taken over leadership of the Dark Daughters and Sons, and is determined to change the school oganization from an elitist clique to a group with meaning, value and substance. she is getting comfortable in her skin and things are getting easier to deal with. But Zoey's strength is about to be tested again. In new and truly terrible ways. She must learn to cope with a soul deep sadness, deal with a betrayal that cuts to the bone, and keep a promise that may turn out to be impossible. Any doubts I had about this series were erased with this book. This for me is one of those reads that make you grumble at being interupted and reevaluate the need for sleep and food, then grumble some more cause the wait till the next book(in this case Choosen in March '08) is intirely to long. You should know that unlike most of P C's books this is not a stand alone story. You don't abosolutely have to read Marked first to understand Betrayed But it really helps and I recommend it highly. If you read Marked and weren't thrilled with it, please reconsider and read Betrayed. It really is that good!
Trustpilot
Copyright © 2022 Thriftbooks.com Terms of Use | Privacy Policy | Do Not Sell or Share My Personal Information | Accessibility Statement
ThriftBooks® and the ThriftBooks® logo are registered trademarks of Thrift Books Global, LLC