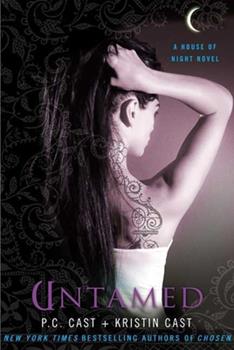 (Book #4 in the House of Night Series)

Life sucks when your friends are pissed at you. Just ask Zoey Redbird - she's become an expert on suckiness. In one week she has gone from having three boyfriends to having none, and from having a close group of friends who trusted and supported her, to being an outcast. Speaking of friends, the only two Zoey has left are undead and unMarked. And Neferet has declared war on humans, which Zoey knows in her heart is wrong. But will anyone listen to...

Published by Andy , 1 year ago
I struggled with book 3 of this series, but I am really glad I stuck with it and continued to this book. I enjoyed reading the change in Aphrodite's character! I also enjoyed the introduction of Stark!

Published by Alaina , 2 years ago
I ordered this book in "very good" condition and it's like new, even smells new! 😁 (I love books leave me alone lol) Came right on time too. Can't wait to read it again and order the rest of the series from this app 💜

Published by Thriftbooks.com User , 14 years ago
In this continuation of her House of Night series, Cast continues to weave and expand her story about adolescence with an extra twist. Her characters and themes are universal and the stories (with their underlying truths) stay with the reader long after the book has been read.

Published by Thriftbooks.com User , 14 years ago
Zoey truly screwed up royally in the previous books when she decided it would be best to keep secrets from her friends. In the end, strangely enough, her enemy was the only one willing to stand up for her and stick by her. Yet, even Aphrodite paid a price for doing so when she became human again at the end of Chosen. Untamed begins with Aphrodite returning to school and meeting up with Zoey again, only this time it is because she has another vision of death--Zoey's death. Apparently, Nyx is sending visions to Aphrodite to warn Zoey that either she makes up with her friends, or she will die alone and that will cause all hell to break loose, literally. I liked the fact that Cast+Cast didn't make everything just honky dory for Zoey. She mistreated two boys and was betrayed by one and now she's eating crow. She won't be easily forgiven for the part she played in hurting two good people who cared deeply about her. Because of that, this book was not all romancy like previous ones. Zoey has a mission and mystery to solve. This increases the pace of the storyline. I also liked the part Aphrodite plays--the reader gets to know her on a much deeper level since she seems to be the predominate friend in this novel. This is definitely worth reading but I would recommend starting from the first and not skipping novels. Otherwise you would be truly lost.

Published by Thriftbooks.com User , 14 years ago
UNTAMED P.C. CAST & KRISTIN CAST Paranormal YA Rating: 4.5 Enchantments Starting two days after 'Chosen' ended, UNTAMED kicks off with Zoey feeling isolated from her friends. After the 'outing' of her relationship with Loren as well as the realization that Stevie Ray was an 'undead dead' her friends are having issues trusting her. If they could only realize the reason they were left in the dark was for their own safety, but all they want to see right now is that Zoey kept secrets, important secrets from them. But when Aphrodite returns unexpectedly to the House of Night, she isn't alone. She's brought Stevie Ray back with her, along with news of a set of horrifying visions of the future--there's a war coming between the vampyres and the humans and its Zoey's demise that sparks it. The fourth in the House of Night series, UNTAMED takes Zoey and her circle of friends down an unexpected and surprising path. Knowing that the target on her back is larger than anyone could have imagined, her new unusual alliance with Aphrodite and the growing tensions between her and the high priestess Neferet, Zoey's determined to keep Aphrodite's vision from coming true. After the surprising deaths of Professor Nolan and Loren Blake, Zoey's willing to do whatever it takes to keep everyone she cares about safe. While there were still a few good chunks of back story scattered through the first half of the book, UNTAMED moves forward at a brisk pace. Aphrodite's surprising infiltration into Zoey's circle of friends, or at least her friendship with Zoey, continues which I was so glad to see as she's become a favorite of mine in the last two books. Actually, at times I thought she stole a few scenes, especially early on when she was helping Zoey and Stevie Ray. But my favorite thing about Aphrodite I think is her continual comebacks to the Twins comments. I loved Zoey's sheer will to keep Aphrodite's vision from coming true and the ending, well there really isn't another way to describe it but heart pounding and jaw dropping. After an ending that will leave you breathless and wondering what lies ahead for Zoey and her friends, I can't wait to see what happens next! One of the best and possibly my favorite book of the entire HOUSE OF NIGHT series, UNTAMED will keep you riveted till the very last sentence. Check out the newly redesigned House of Night website at www.houseofnightseries.com Lisa Enchanting Reviews September 2008

Published by Thriftbooks.com User , 14 years ago
I didn't love Choosen and as a result began to worry for the future of the series, so it was with trepidation that I began Untamed. Happily my doubts were erased within the first page of the book, and I have to say that untamed is the best of the series so far. The book opens just days after the events of choosen and Zoey is facing the reprocussions of all the secrets she kept and the weight of her mistakes is heavey indeed. Zoey is walkimg around under a storm cloud of loneliness, guilt,and hurt but she has no idea how dark things are about to get. Aphrodite has lost her Mark but not her visions and she's seeing Zoey's death. A few versions of it actually, and the only way to avoid one of them is to make things right with the friends who aren't speaking to her,and just in case fixing her life and trying to change the future weren't enough to worry about. When in the grip of a terrible vision Aphrodite pens a prophacy in Zoey's Grandmother's hand writing that points to Neferet's unthinkable end game scheme. The campus is full of strange crows, the high priestess of all Vampyre high priestesses is currently in residence at the school, there's a new guy at the House of Night, and Eric's back and teaching Zoey's Drama class. Stevie Rae is leading the red fledglings with secrets of her own, and Zoey's made friends with an unusual Nun. Before it's over The House of Night will explode in fire death, and chaos, and Zoey will face the possibility of a truly crippling loss. We see a much more mature Zoey in untamed, she's far more in control and willing to tap into her gifts and have faith in the outcome. Zoey refuses to be bullied and won't back down. The ladies Cast have crafted a serious page turner here, with a giant pay off and a mother of a cliffhanger I will defintely be be wating for Hunted in 09

The Best Book in the Series!

Published by Thriftbooks.com User , 14 years ago
Zoey isn't having the best of weeks. All her friends are mad at her. They felt betrayed by the fact that Zoey was keeping secrets from them. They just didn't understand she was trying to keep them safe. She didn't have a boyfriend anymore. Last week, she had 3! But Loren Blake, the adult Vampyre Poet Laureate, seduced Zoey into thinking he was in love with her. Neferet, the evil High Priestess, had set up Zoey. And when she was with Loren, the imprint she had with her human boyfriend, Heath, was broken. In addition, Erik Night, the gorgeous fledgling that had just made his transformation to adult Vamp, walked in on them. Heath isn't speaking to Zoey and now, neither is Erik. This was all before Loren was killed in a bizarre ritual that was causing Neferet to wage a war against the humans. So, yes. Zoey's life sucks alot right now. In addition to all that stress, Zoey is also dealing with the Stevie Rae/Aphrodite issue. By casting her circle for Stevie Rae, she is no longer undead, but has transformed into some kind of other vampyre. Her mark is now colored in just like the adult vamps, but it is red. But with Stevie Rae gaining her humanity back, it caused Aphrodite to lose her mark. Now she is no longer a vampyre, although only Zoey and Stevie Rae know. But she is still having visions. And now her visions include Zoey's death and an all out war between the vampyres and the humans. And it looks like it is up to Zoey to stop it. Book 4 starts a few days after Book 3 ended. And it is way darker and more sinister than any of the preceding books. Zoey is way less whiny in this book. And it looks like she is stepping up her game. It's going to come down to a battle between good vs. evil, and Zoey is finally becoming the Priestess she was chosen to be. She has firmly taken control of who she is, and gathering around her those that want to fight the evil that has come to the House of Night. PC and Kristin have certainly brought their A-game with Untamed. They wrote an excellent novel, which was an extremely fast read for me, because I just couldn't put it down! The series just keeps getting better and better. And I can't wait to see how things shake out in the next installment!!
Trustpilot
Copyright © 2022 Thriftbooks.com Terms of Use | Privacy Policy | Do Not Sell or Share My Personal Information | Accessibility Statement
ThriftBooks® and the ThriftBooks® logo are registered trademarks of Thrift Books Global, LLC