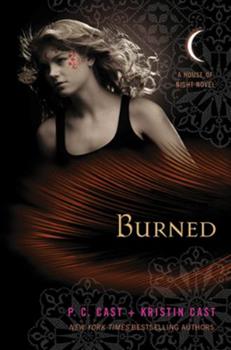 (Book #7 in the House of Night Series)

When friends stop trusting each other, Darkness is there to fan the flames.... Things have turned black at the House of Night. Zoey Redbird's soul has shattered. With everything she's ever stood for falling apart, and a broken heart making her want to stay in the Otherworld forever, Zoey's fading fast. It's seeming more and more doubtful that she will be able pull herself back together in time to rejoin her friends and set the world to rights. As...

Published by Andy , 8 months ago
Oh my goodness this book! This was easily the best in the series so far. I absolutely love Rephaim and Heath (they both had me crying then blushing within a few pages). But overall I loved how the story contiued through this book.

Could use a little more

Published by Thriftbooks.com User , 11 years ago
I love this series. I have even hooked a good friend on this series. Burned however was good but left you wanting more. When reading the story you want to know more about the warriors and there acient ways. The ending of the book was a huge cliff hanger making you wonder were she is going from here. I wish she would have given some idea of when the next book will be coming out.

Published by Thriftbooks.com User , 11 years ago
Just finished and loved it! I am not a teen, but I still love a great story. I liked that this book showed the thoughts and feelings of the other roles, their relationship to each other and themselves. I actually yelled "No" at the end of the book with Stevie Ray and Rephaim. I can't wait to see how their issues/connection is handled. I liked how the Zoey's friends worked to save her, because sometimes we have to trust others for us to grow. I think the feelings that Stark had to deal with to learn about himself were interster and really reflected the way all of us must make choices for ourselves that risk our connect to those we love. I also loved that this book reflected the struggle that we go through to become more than we are. I really can't wait for the next installment, but I guess that I will have to.

Published by Thriftbooks.com User , 11 years ago
Hello everyone, I am going to keep this short and to the point. In Tempted when you know who got killed I thougth to myself "dear god, I am so done with this series. Its getting stupid". For whatever reason I decided to pick up this book and continue on and I am so glad I did. This ended up being the best intallment of all the House of Night books. Read it and you will agree. Yes this story switches Points of View a lot. But that is what keeps it interesting. The story of Zoey, Heath, Stark is wonderful. But I was especially IN LOVE with what developed with Stevie Ray and Rephaim.

Published by Thriftbooks.com User , 11 years ago
P.C. Cast has gone way beyond the talent she has shown in previous books in her writing of the most recent installment of the House of Night series. The multiple perspectives, introduced in the 6th book worked masterfully in telling this book's unique story. The way that the storyline is told is both surprising as it is breathtaking. There was a point in this book where P.C. Cast tricked me and I absolutely loved it! When the realization hit, I was in awe of how well written the revelation was. And satisfyingly enough the reader will be just as challenged as the characters are while reading this book. As a friend once put it, "these books are like snacks." With that comparison, this book is not a snack the way the others are, and it isn't a full course meal either. Instead, it sits the reader down and shows them how to cook. But lets go back to the first 6 books. Because without them, this book wouldn't be nearly as pointed. During the House of Night series, the reader feels a need and demand that the characters learn, make decisions, and grow. Books 1 through 6 hasn't really shown us the volume to which these characters can change. While we know that they have, we haven't ever been as intimate with the characters until this 7th book, where we are forced to look at these multi-dimensional characters and acknowledge the depth of them. Heath, Zoey, Aphrodite, Darius, Stevie-Rae, Rephaim, Stark and the big baddies (Neferet and Kalona) are the main focus and while fans of the Twins and Damien and Jack might be disappointed, the focus on the characters listed is key to this book. What's marvelous about that, though is not all characters are developed in the present, not all are even truly in the book, but each and every character mentioned takes on more meaning and becomes so much more clear than in previous books. Now I'm a huge Stark fan and by the end of this book I don't see how anyone couldn't be, but that's not where I think this review should focus. What's more important is that I'm not a huge Zoey fan. I'm not a huge Heath fan. But by the end of this book I was. Zoey's character changes so much that the reader may expect whiplash yet the story is crafted so that her extraordinary progresses reads naturally. Heath's character is developed simply by reviewing the constants in his relations with everyone in the book. It does not serve to make any reader feel stupid, but rather does cause a reader to stop and think about how Heath really doesn't change so much as our understanding of him did. Stark. Where to even begin. We learn his history, his future and glimpse into his mind in the present all at once while somehow carrying his load for him. His role in this book is so well written and so well played that this character really shines. Those of you interested in Stevie-Rae and the inevitable dilemma of Rephaim will not be disappointed by how this story-line, so loosely and tightly mingled with Zoey's is developed and expressed. And that fir
Copyright © 2020 Thriftbooks.com Terms of Use | Privacy Policy | Do Not Sell My Personal Information | Accessibility Statement
ThriftBooks® and the ThriftBooks® logo are registered trademarks of Thrift Books Global, LLC