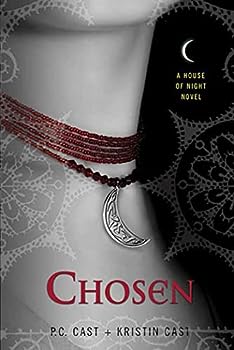 (Book #3 in the House of Night Series)

Dark forces are at work at the House of Night and fledgling vampyre Zoey Redbird's adventures at the school take a mysterious turn. Those who appear to be friends are turning out to be enemies. And... This description may be from another edition of this product.

Published by Erin N Teague , 1 year ago
These books are so good and have stood up well over time. They hit hard topics and while some of the content can be a bit troubling (like zoe and her teacher doing the do) It is still a well written and easy to follow story with wonderful characters.

The story line is getting good!

Published by KD , 1 year ago
I really enjoy reading how much Zoey has grown since the 1st book. She has became a strong fledgling, the story line is thickening great. I couldn't put this book down

And The Story Continues

Published by Andy , 1 year ago
I still really like the story but if it wasn't for the ending I might not continue the series. I just had a hard time accepting the battle between the multiple romantic interests. The ending really saved this book.

Books were in better condition than expected

Published by Alaina , 2 years ago
I ordered this book in "very good" condition and it's like new, even smells new! 😁 (I love books leave me alone lol) Came right on time too. Can't wait to read it again and order the rest of the series from this app 💜

Perfect for the young teen/adult!

Published by Kayla , 2 years ago
Such a good story! When I first read the books, I couldn’t put them down! Read the entire series!

Published by Nicole M. , 3 years ago
Their are a lot twist and turns in this book. Again I was very pleased it kept me hanging on to the edge of seat. If you might like the Sookie stackhouse series (The True Blood series ).

Published by Thriftbooks.com User , 4 years ago
I can’t stop reading these books. They are so good. I read this in 2 days. I couldn’t put it down. I can’t wait to get the next one.

I have Chosen the House of Night Series!

Published by Thriftbooks.com User , 13 years ago
I was completely surprised at the twists and turns in Chosen and on the edge of my seat. I have circles under my eyes because I couldn't stop reading some nights!! I was just as charmed by Loren, and I'm sure I felt the same amount of emotions at the end as Zoey. I really liked when she stood up for herself and used her powers. Wow! She's amazing, and I have no doubt that she'll be able to learn from her mistakes and come out fighting!

Published by Thriftbooks.com User , 14 years ago
I loved this book, altho it defiantly left you craving more. I cant wait for the next book to be released, seems like it can never be too soon.

This series keeps getting better!

Published by Thriftbooks.com User , 14 years ago
I picked up this series because I have started to like more "paranormal" series vs. reading just stand alone novels and I have to tell you that I wasn't sure if I was liking the series with just book one-up until the middle to end of the book. That was when I realized that it was pretty cool. It took a while to get used to Zoey's (the main character) narrative but by this book (book 3) you feel like you know her and aren't suprised by anything that comes out of her mouth. This book picks up where the 2nd one leaves off: Zoey is the leader of the Dark Daughters and is imprinted with Heath her "ex" human boyfriend, dating Erik Night one of the most handsome and popular students at the House of Night, and is being flirted with by the mysterious and handsome poet Loren, which is a teacher at her school. Suddenly not only does Zoey have to deal with her bloodlust issues and dating 3 guys at once - she has to come to terms with the realization that her best friend - who is now the Undead dead - needs her help or her soul will be lost to darkness forever and that humans are stalking vampires and murdering them - causing the vampires at and students at the House of Night to become uneasy with humans being so close to them. This book was really good (the best of the 3 out so far) and I can't wait for more to come!!

Published by Thriftbooks.com User , 14 years ago
I was absolutely enthralled with this book I couldn't put it down. I didn't read the other two book in this collection but you best believe I will. This book is a real page turner. I love the character of Zoey!!! If you like this you will also like Love Returns Through The Portal Of Time

Published by Thriftbooks.com User , 14 years ago
It's not an easy path that Nyx has chosen for Zoey Redbird. Since she was Marked as a vampire by a hunter, she's had to kiss her old life good bye. What is becoming even more evident to her is Nyx's parting advice: "..darkness does not always equate to evil, just as light does not always bring good". This sets the scene for the Cast's next foray into the House of Night series. In this third book, "Chosen", Zoey has to grapple with more personal drama-and girls, there is a biggie in this book, the calamity of her having three boyfriends! Zoey has to juggle her burgeoning Imprint with Heath, her romance with Erik and yet, she still is mysteriously drawn to hottie Professor Loren Blake-a full-fledged vampyre (who is doing some serious swoopin'). How it all ends...welllll... is the climax of the book. Things are definitely heating up for Zoey in more ways than one. The Casts don't leave us hanging entirely-the drama continues from "Betrayed" as Zoey wrangles further with Neferet-the conclusion that she is not as she appears to be-Neferet has been controlling the remnants-blood-craving ghouls who are no longer human or vampyre. These are the students that mysteriously "died" during transformation and are being led by Zoey's former roommate; Stevie Ray and Zoey will do anything to save Stevie Ray-including hiding and lying about her existence from Shaunee, Erin, Damien and Erik. But saving Stevie Ray means going against Neferet, who is hell bent on preventing exposure. Things get further complicated as two professors are murdered on school grounds (possibly by the People of Faith), and the House of Night calls in the big guns: The Sons of Erebus (super-hot warrior vampyres). More surprises ensue-Zoey confronts the parental units, Damien has a love interest (finally!),the crew comes into their own magickal elements and even Aphrodite doesn't seem to be the beeyotch everyone thinks she is.... The Cast's talons craft a symbolic tale steeped in mysticism, arcane vampire religion, and a riveting cast of characters that is believable enough to stand solidly on its own-two feet. By comparison, it might not have the verve of de la Cruz's Blue Bloods, but this cast of characters are compelling enough in their own right. The series is absolutely riveting and once you cross the threshold into the House of Night, you'll find it very hard to put down. I cannot wait for "Untamed" to come out!Copyright(c)Nicola Mattos
Trustpilot
Copyright © 2022 Thriftbooks.com Terms of Use | Privacy Policy | Do Not Sell or Share My Personal Information | Accessibility Statement
ThriftBooks® and the ThriftBooks® logo are registered trademarks of Thrift Books Global, LLC