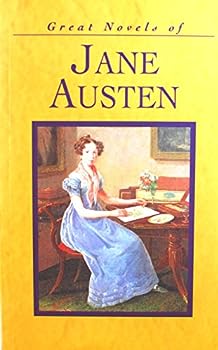 From the Back Cover:

Published by Thriftbooks.com User , 15 years ago
In the early nineteenth century, while Napoleon was transforming Europe, the daughter of a rural English cleryman was quietly transforming literature. Few novelists were as far ahead of their time as Jane Austen was of hers. This volume collects her three best and most important works of fiction. SENSE AND SENSIBILITY, Austen's first major novel, is the compelling story of two sisters of opposing temperaments. The romantic clash of two opinionated young people, Elizabeth Bennet and Fitzwilliam Darcy, provides the sustaining theme of PRIDE AND PREJUDICE. This classic novel captures all the hilarious class consciousness of eighteenth-century English families. EMMA represents the genius of Jane Austen at its full maturity. This magnificent novel centres on Emma Woodhouse, a supremely confident young woman deyermined to arrange her life and those around her into a pattern dictated by her romantic fancies. Jane Austen declared Emma a heroine "no one but myself will much like." But generations of readers have profoundly disagreed.
Copyright © 2020 Thriftbooks.com Terms of Use | Privacy Policy | Do Not Sell My Personal Information | Accessibility Statement
ThriftBooks® and the ThriftBooks® logo are registered trademarks of Thrift Books Global, LLC