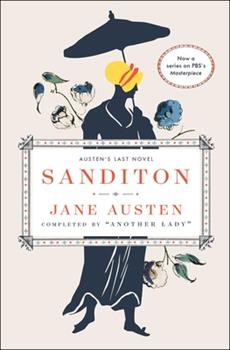 by Jane Austen and Another Lady

Jane Austen's last work, now a PBS limited series adapted by acclaimed screenwriter Andrew Davies. Sanditon--an eleven-chapter fragment left at Jane Austen's death completed by an Austen devotee and novelist-- is a charming addition to Austen's novels on England's privileged classes and the deception, snobbery, and unexpected romances that occur in their world. When Charlotte Heywood accepts an invitation to visit the newly fashionable seaside resort...

A Pleasant Journey created from an unfinished novel of Jane Austen!!!

Published by Thriftbooks.com User , 16 years ago
It is a shame that Jane Austen did not live to finish this novel, but lucky for us that someone has made a great attempt to complete the fragment. It is very well done. If you are worried about the consistency of switching authors mid-book, need not worry, I assure you. I found it very hard to decipher where Jane left off and where 'another lady' begins. I think she followed the style of Jane's writing and predicted the correct outcome. I found nothing wanting with this novel. It was in no way disappointing. I highly recommend it for anyone who loves Jane Austen. To entice those of you who are still undecided: The Scenario: A couple from the seaside resort of Sandition get into a carriage accident near the home of Charlotte, our heroine. Charlotte's family helps them and nurses Mr. Parker who sprains his ankle. In return they take Charlotte back with them to Sandition to give her a nice holiday. Charlotte is the most sensible and observant character. Everyone around her seems to have their head full of something other then sense and practicality. She meets all sorts of people, a wide variety of personalities and demeanors. Charlotte prides herself in being a good observer. But when Sidney Parker, brother of Mr. Parker comes to town, Charlotte finds it difficult to keep her head on straight and her level headedness disipates. This book brought me so much pleasure. If you don't read it, how will you ever find out: If Clara Brereton will elope with Sir Edward? Or if Henry Brudenall will get over his cousin whom he was jilted by? Or why Sidney really came back to Sandition the night of the ball?

I wish they would make a movie based on this book!

Published by Thriftbooks.com User , 16 years ago
This book is by far the best Jane Austen continuation that I have read. You get absorbed in the story and the characters right off. The original text is in this book and the author seemlessly carries on the story until the very satisfying ending(no spoilers here). I would recommend this book to anyone who loves Jane Austen's stories. My hope is to see an A & E mini-series of this book one day!

Published by Thriftbooks.com User , 19 years ago
Although Jane Austen did not live to complete this novel, the first eleven chapters that she did write (remembering that she did not live to edit and proofread as she probably would have liked--and therefore these chapters provide a wonderful example of her process of creation)opened a door that has the charming capability to lead us down several different corridors. 'Another Lady' has chosen just one of these many corridors and, while admitting herself that she is not Jane Austen and therefore could never possibly complete the novel exactly as Ms. Austen would, leads the reader on an engaging, worthwhile journey. For those critics that scoff at her attempt and criticize her courage, I ask them to complete "Sanditon" better than 'Another Lady' did. Not only does 'Another Lady's skillful penmanship shine through but also her humility in the insightful apology at the conclusion of the novel. Perhaps those who ridicule her should try to behave with more kindness and compassion, admitting to themselves that they could do no better, and would probably do worse. To any Jane Austen fans who are considering reading this novel, I wholeheartedly encourage you to. Read this book with an open mind and I promise you will enjoy it. Through the pages of Sanditon we are allowed to escape into a more peaceful, contented time. A friendlier time. A time which, I am sad to say, is too far behind us now.

The best Austen sequel/completion I have read up to date

Published by Thriftbooks.com User , 20 years ago
"Austen's Sanditon, completed by another Lady" is one of the first Austen sequel/completion I have read, and during the 7 years since I first started to read takes on Austen it still remains the best one. Granted, the "Other Lady"'s prose is not perfectly seamless, and the characters have little modern touches about them sometimes; but compared to the inaccuracies and prose/plot attempts I found in other Austen sequels this one's errors are negligible. The author develops the plot believably enough and in an entertaining way, the characters- particularly Sidney and Charlotte- are engaging, and the prose is most of the time very good. Other sequels always seem to lack something about them- either in prose (as in Julia's Barret entertaining but highly flawed "Presumption"), an interesting plot (or otherwise, as in Joan Aiken's very-good "Jane Fairfax", keeping true to Austen's book), or adequate characterization. This book, however, has everything in sufficient and well-done amount, and I found it to be the most satisfying of the Austen takes that I read.

Published by Thriftbooks.com User , 22 years ago
I actually read Sandition. The first 11 chapters were written by Austen, but she died before completing it. The version I read was finished by "Another Lady." She remained faithful to Austen in all senses. The turn of events were really quite amusing.
Copyright © 2020 Thriftbooks.com Terms of Use | Privacy Policy | Do Not Sell My Personal Information | Accessibility Statement
ThriftBooks® and the ThriftBooks® logo are registered trademarks of Thrift Books Global, LLC