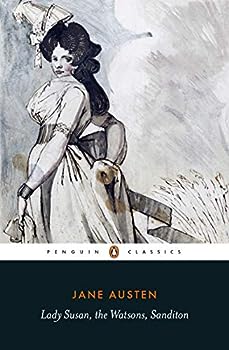 This description may be from another edition of this product. A Penguin Classics edition of three lesser-known Austen works, including Lady Susan , the basis for Whit Stillman's feature film Love and Friendship starring Kate Beckinsale and Chlo Sevigny These...

Published by Thriftbooks.com User , 14 years ago
Unlike most of the reviews below, this review discusses NOT Jane Austen's short epistolary novella "Lady Susan", but, rather, the product presented in this page- Phyllis Ann Karr's 1980 re-write of Austen's novella. The original novella deals with Lady Susan, a beautiful and crafty young widow who uses her appearance and intelligence as a weapon to dupe and manipulate everyone to her own satisfaction. She takes on a married lover while making at least two younger men fall in love with her, all the while trying to bully her "milky", oppressed daughter Frederica into marrying a foolish young baronet. She is the heroine-villainess of the tale, and a rather unique figure in Austen's literature (although not so unique, since the novella was written in Austen's youth, and anyone who read her Juvenilia knows that the young Austen's early writing could be brutally funny and even amoral). Karr's completion of this tale is absolutely excellent. She chooses to re-write Austen's story in third person rather than the original letters. Her prose is clear and beautifully written and, while not exactly Austen, very suitable to the kind of novel she is writing. Immeasurably superior to the many poorly written completions deluging the market nowadays. Karr's characterization is excellent as well. She carefully follows the characterization presented in Austen's novella, and with additional, attractive development. Lady Susan is clever and crafty; Frederica is shy and "milky" but, at the same time, a serious, deep character, and extremely appealing as the novel's heroine. Other characters follow their original outlines, except two. Maria Mainwaring was drastically altered; but Karr's reasons for doing this were perfectly sound, and Maria merges gracefully into the novel. There is also the important addition of Charles Smith, only briefly mentioned in the novella but fully developed as Karr's original character. In some ways he perhaps becomes a little too important, but by the end of the novel I understood the reason for it and did not resent Karr's development of this character, who is actually quite appealing. My only complaint is that he seems to be better developed and more sympathetic than Reginald De Courcy. Karr follows Austen's plot fairly closely, only making modifications where needed. "Lady Susan" is incomplete in some ways, the author finishing the tale with a hasty, although quite funny post-script. Karr completes the tale, only altering details when necessary and also enriching the rather slim plot by adding details to originally short incidents or events only briefly mentioned. There is one extremely significant alternation, in the romantic department, which I am not sure that all readers would like; but I understood the reason for it (although the author did not specifically state it in her Author's note) and I ended up liking it, even though it does not follow what was (apparently) Austen's original intentions. In summary, this is DEFINITELY

A great twist from a favorite author

Published by Thriftbooks.com User , 14 years ago
I just listened to "Lady Susan" as a Naxos Audiobook. What a delightful experience! It has all the Austen perceptiveness and humor for the follies of her society, but the title character is emphatically NOT an Elizabeth or Jane (P & P), Elinor or Mariane (S & S) or even an Emma. This is a "bad girl" -- more like a Lydia (P & P) or Lucy (S & S) -- armed with maturity and even less conscience. I don't usually enjoy audiobooks with multiple readers & music, but this one was a true pleasure.

Published by Thriftbooks.com User , 14 years ago
Reading this reminded me why I love Jane Austen's writing so much. Such vitality and snap to it. Lady Susan is written in letter form (which I didn't find too hard to deal with because I have been reading another set of books written in this manner) Its a very gossipy little story. Lady Susan a woman very used to getting her own way has foisted her presence on her unwilling inlaws. She then goes about corrupting the son of the family to the almost point of matrimony with her even though he has a natural inclination for her much tamer and sweeter daughter, Frederica. It all ends pretty amusingly and I could really see this as a successful stage play all of the different voices that are represented in this. The Watsons I was SO SO SO upset to get to the end of what she had written as it is only around 30 pages long or so, her writing and characters are already strong that early into a work. Emma Watson seems to have a bit of all of her other heroines in her, she's quiet and observant, she's been taken from a rich sitation to a poor one, she immediately interests the most elusive male in her new neighborhood (while she is more interested in someone else). What I found the most interesting was the presence of a child character, Charles is a little boy who Emma befriends at a dance--and dances with it is adorable and he is a great character, something I've never seen in her other works. This could have been a brilliant novel. Sanditon, ironically since I am rather ill at the moment is about a town designed for curing all ills, sort of a struggling pre-Bath. Its a seaside resort, Charlotte is our heroine, she is visiting with one of the main proprietors of the place and is the only truly sensible character to be encountered in the short work. I've no doubt there would have been a few more to witness had Austen finished it. It would have been great to mee the Miss Lambe character as she is half mulatto--race never being something witnessed in Austen's other works. I found myself laughing in several places, while the characters are very cartoony I still found them very endearing and very easy to picture. Its a great begining.

Lady Susan - Better as an Audiobook

Published by Thriftbooks.com User , 17 years ago
I have just recently discovered Jane Austen's writings via the local library's audiobook section. I've loved what I've 'heard' thus far so when I saw a unabridged copy of 'Lady Susan' on CD for less then 15 dollars, I grabbed it. Harriet Walter, Kim Hicks, Carole Boyd and the rest of the cast do a WONDERFUL job of portraying the various letter writers in this amusing novel. Their different voices lend so much to the presentation of this novel that I doubt I'll ever be able to read it, just listen to it. I devoured (if you can devour an audio recording) this book in little over 2 days. I normally just listen while I am in the car driving to and from work, but I ended up taking this into the office with me and listening between phone calls. If you want a amusing piece of literature, pick up the NAXOS Audiobook presentation of 'Lady Susan'. It's worth it.

Published by Thriftbooks.com User , 18 years ago
Our capacity to form first impressions is a tendency Jane Austen examines in all her fiction. Her characters sometimes are shown to form incorrect impressions. Her characters often strive to give false impressions. None of her fictional characters is so preoccupied with setting up a public image in order to gain her own ends as is the Lady Susan who gives this novella its name. Lady Susan is the archetypal coquette, the skilled deceiver. She is Thackeray's Becky Sharp, fifty years before her time. Jane Austen plays the game of deception with us too. In this novella, which is almost entirely in epistolary form, we form the impression from reading Lady Susan's first letter, that she is a grieving widow, devoted to the care and education of her 16 year old daughter, and willing at last to accede to her brother-in-law's pressing invitation to stay with him and his family. Wrong! We too have been duped, as we soon discover. Jane Austen first drafted several of her novels in epistolary form, that is to say, in the form of letters exchanged by her characters. This one, which may have been the earliest of all her surviving works, alone remained in this form. And great fun it is, although Lady Susan's contriving and heartlessness, especially in regard to her daughter, sometimes goes beyond the comic to the cruel.Naxos has added to the fun that this "entertainment" can provide by issuing the novella in audio book form. Seven actors are allocated the parts of the seven letter writers. Furthermore, there is no abridgement of the text, and there are some snatches of music that serve to provide breaks between the letters and indicate the passing of time. Altogether, an ideal production.
Copyright © 2020 Thriftbooks.com Terms of Use | Privacy Policy | Do Not Sell My Personal Information | Accessibility Statement
ThriftBooks® and the ThriftBooks® logo are registered trademarks of Thrift Books Global, LLC